Great work. Everything I use works except backup coreelec and kodi settings. It starts but before it ends Kodi is restarted and no backup saved.

I had the same problem. I was able to trace it to Aeon Trajo skin and Red Carpet Actresses add-on. Well, at least uninstalling them fixed it for me.

I’ve had some skipped frames with the latest build. The video file should be okay, standard HEVC encode I’ve done and HW decoded.

I have a stable coreelec 9.2.5 on my N2’s installed to the SD card. Can I just download the tar and update it like that via the standard process or need to reinstall? I don’t use any addon or crazy skins.

Yes, just dump the file in the .update folder, but first make a full system backup, and keep it handy on a USB Flash drive, just in case the update fails and you have to revert back to 9.2.5

just a heads up, emby has been updated for matrix.

in the emby beta repo, emby-next-gen

I notice some UDP FHD streams cannot fill in the buffer, just shifting between 0-2% with no sound.
On Kodi Leia builds buffer goes up to 20% 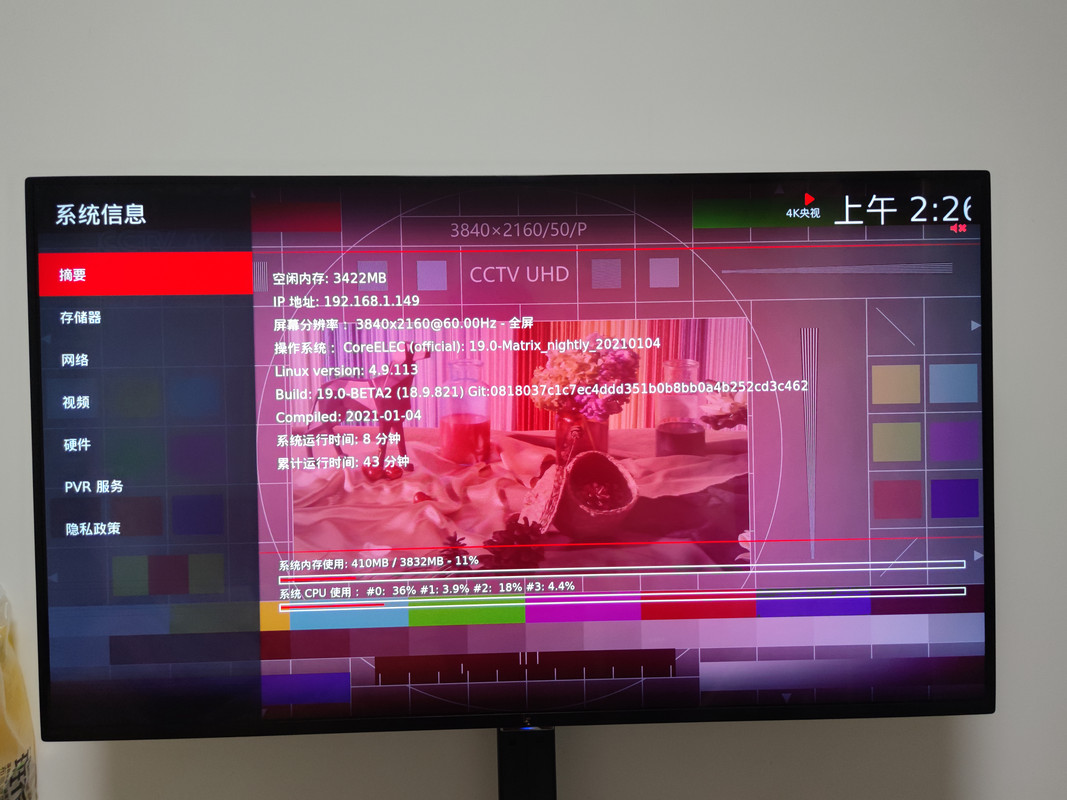 But it not enough correctly! On 19th not working ir remote, but on 18 is worked. Im tried all messon configs, but got unlucky.

as_id, you can’t expect any useful response from description you gave. A lot of people are using IR the same way as with CE 9.2.

Okay, confirming that the remote is running on a Ki pro with the Matrix on board can help here. And it would be nice to have a link to config …

as_id, the configuration is the same as it was in previous version. Can you write what you did?

ALL of them? Repository for AmRemote & Meson IR Remote Controllers

I guess my Minix U9-H will have to retire later on then, will probably wait for the stable release of Kodi Matrix. What are the best devices nowadays for Coreelec? Thanks CE team for your awesome work, my current 9.2.5 setup works wonders! CoreELEC Settings Hardware Section There are some different options to customize the used device. Please keep in mind that some option may be accessible or hidden depending on the used hardware. Some options are marked with DANGEROUS: DANGEROUS means there will be needed to enter a random confirmation code before this setting get applied! Changing this option can maybe prevent the device from booting! Enter the CoreELEC Hardware section [enter_hw_section]

I would suggest a box with an S905X3 or better SoC.

What are the best devices nowadays for Coreelec?

I have the Minix Neo U1, so I’m in the same boat as you.
From what I’ve read, I’d choose either the Odroid N2 (4 Gig RAM) or the Minix Neo U22-XJ. Both have the new S922 chipset. There is also the N2+ but that additional power would go to waste as the N2 is already more than powerful enough - or so I hear. The N2 would probably be the cheapest option.