I keep getting notification about the latest update for CE, but when I go to update it via the CE addon, it shows blank update channels and versions.

There’s not much debug information in the logfile from the CE addon update functions. The only error I get, is when I exit the blank versions window.

Can this be confirmed, and perhaps fixed? 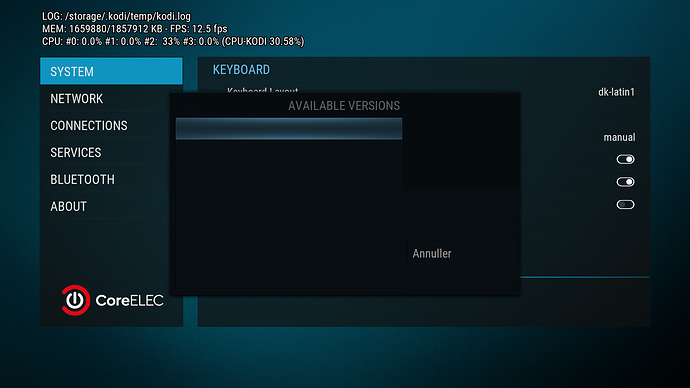 Not a solution, download the update tar file from github, copy to the update folder on your device & reboot

The blank channel and version number is the expected behavior.
The problem is, that you changed your update config from “auto” to “manual”.
This way you only get the update notification.
I would suggest to activate “auto” update to always have the newest version installed automatically.

How is this expected behavior?
In LibreElec, I could select update channel (major version) and the available versions would show the versions of that major version, allowing for manual up-/downgrading from within kodi.

That should be the expected behavior also in CoreElec. Otherwise I don’t see any reason even having the entries in the menu. If they just show blanks, then they should just as well be removed.

Is the Custom Channel update feature not implemented either? (not that I use it anyway)
How about the “Submit Statistics” - any point in keeping that enabled, or is this working as expected?

Thanks for the suggestion about the “auto” update feature, which is also the default in new setups. However there’s a reason I choose to do manual updates only (also on addons). You see, that way I can decide when to install any updates, and maybe hold off updates for some time, instead of being caught off-guard with an update that could potentially break something.

Please let me know if this can be accepted as a valid bug report. In the mean time, I will use the tar file to update.

In LibreElec, I could select update channel (major version) and the available versions would show the versions of that major version, allowing for manual up-/downgrading from within kodi.

That should be the expected behavior also in CoreElec.

Why should it be? CoreELEC != LibreELEC

The custom update channel is implemented, and both the “update channel” and “versions” fields are used for that. Therefore it’s not useless and can’t be removed.
If you keep choosing “manual” as your update strategy, then the manual way indeed would be to copy the tar file to your .update folder.
But again: It’s not a bug, but the expected behavior.