I am running CoreELEC 8.95.0 (latest version at time of writing) on a Vorke Z6 Plus (S912) and I have no option that successfully outputs audio over my 3.5mm jack. I can achieve audio out via Bluetooth (Pulse: Bluetooth) and HDMI (ALSA: HDMI & ALSA:PCM) but no option outputs sound via the 3.5mm jack that I have wired to my speaker set up.

Could anyone give me any advice on this?

As far as I know the only way to get audio over the 3.5mm jack is to also output video via that port.

Thanks for the response.

Any hope of that changing or is it a hardware limitation?

I have HDMI to a projector and I want to run audio (via 3.5mm) to my speakers.

As far as I know the only way to get audio over the 3.5mm jack is to also output video via that port.

Not true, I use HDMI video output & analogue audio out (m8s pro - s912).
@Capt.Insano it’s the PCM option - well at least on my end there’s an Analog PCM one.

I had expected that was the correction option but did not work. I will double check again when I get home but I am nearly 100% sure the Alsa: PCM Analog option still outputted via HDMI and played on projector (crappy) speakers.

Will report back shortly 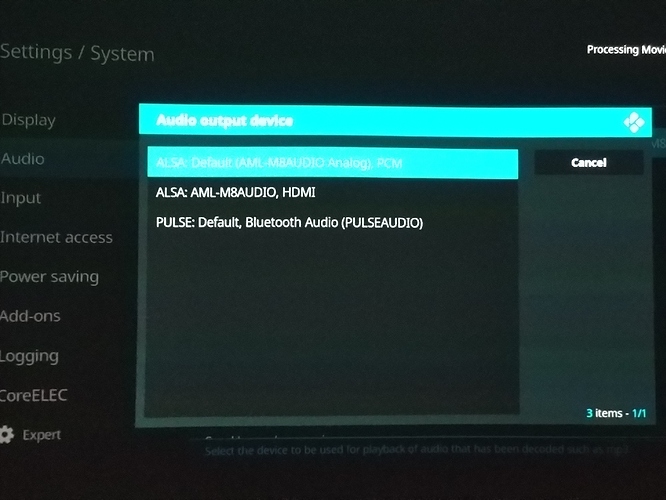 Confirmed. The PCM option as per image does not output via 3.5mm jack but outputs via HDMI to projector instead.

(BTW: I have also tested the cables by connecting my phone to the 3.5mm jack and audio plays perfectly on the speakers)

Any idea on fixing the PCM option to output correctly to the 3.5 jack instead of HDMI?