I’m having problem with master build of CoreElec, but also same problem happened on 8.2 on S905 venz v10 box.
After few hours playing playlist with videos freeze at the end of the video and doesn’t go to the next video, but seek bar is showing and conting time, but much longer than actual video length. 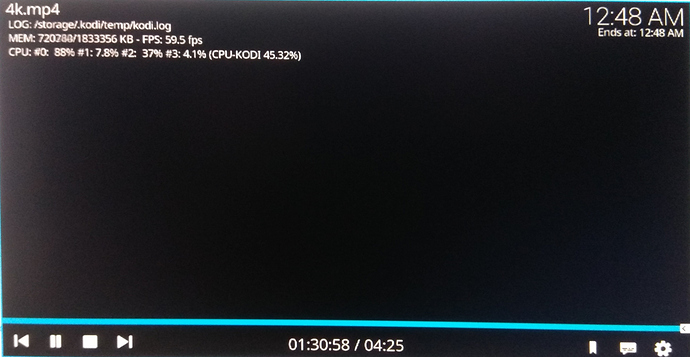 I’ve been noticing something similar on Windows Kodi 2018-010-04 after playing a few videos. Kodi won’t back out of a video. The recent nightlies are even worse, as sometimes the video won’t even start. So this has probably nothing to do with CE, let’s hope the KODI team gets this under control soon.

I’ve been having timeline issues as well, live tv especially. After an hour or two the timeline stops allowing skips until I stop and restart the stream.
Smells like a Kodi problem so I’m holding off on bug reports for the time being and keeping an eye on commits.

I will post issue on xbmc, its for sure Kodi issue. Also i’m starting videos via autoexec.py with xbmc.PlayMedia with xbmc.PlayerControl(repeatall) parameter. I’m trying to play it from menu without script and will see if there is any difference.

Before posting issues to Kodi bugtracker check that the bug exists on x86/PC version of Kodi otherwise CoreELEC will be blamed and the issue closed.

X86 version is working fine on ubuntu 18.04, didn’t freeze yet. So maybe it is amlogic s905x and s905 specific problem, anyway I will try now different ARM, maybe raspberry and I will see.

Any idea about temporary workaround? Maybe try to compare value from seek bar and if its bigger than video length than skip to next video? How to catch actual video position and check it regularly?

I didn’t figure out yet, so now I’m just comparing
xbmc.Player().getTotalTime() and xbmc.Player().getTime(). If getTime is bigger than getTotalTime, it will skip for next video. It’s working ok without freezing now with this autoexec script, but would be nice to have some stable solution.

would you let me know how have you managed to install coreElec into venz v10 (non PRO) version?
Would it be possible to make dualboot (android/coreElec)?
Thank you.