Hi Folks !
I use coreelec with wetek hub. Starting from 8.90.3 the upgrading process fail with the following message.
“Missing (target) or kernel image”
after the boot my release is now the 8.90.3 (i suppose with an old kernel) and the device is very slow.
Someone could help me ?
Thanks in advance.
Skunz

After extracting the tar archive I see the following message:
g (target) kernel.img or /SYTEM!
(Unfortunately I cannot read the beginning of the message on my screen, but it seems to be the same message as Skunz metnioned)

For now I switched to manual update in the CoreELEC settings and at least avoid the updating trial on every reboot and can use 8.90.3 as before.

Just be sure that the download is complete before you reboot

Of course. I also downloaded the tar archive manually and copied it in the .update folder. Same issue.

I have the same issu on my Wetek Play 2, encloased a Screen of the TV 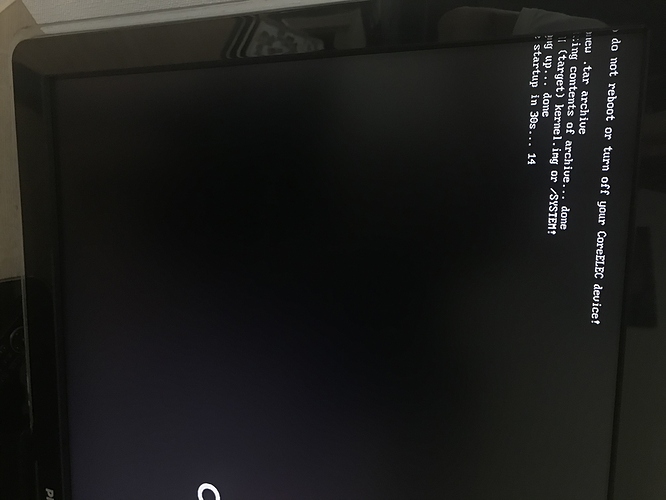 Coolzero82,
Same screen on my wetek hub.
Thanks for the answer.
Wait for a new release solving the bug.
Skunz

I have tried to investigate this by installing 8.90.3 (S905) on a clean memory card and then letting the system auto-update to 8.90.4 and it completed successfully so I’m not too sure what has gone on here.

You can manually update by replacing the files on your memory card with those in the tar, 8.90.4 has been installed on 774 devices at the time of this post so I would assume there would be more reports on this if something was broken.

Put the 8.90.3 tar inside the update folder and see if that installs.

Adamg,
How can I replace files on memory card with those on tar ? Can you help us ?
Thanks
Skunz

Replace SYSTEM and kernel.img with those in the target folder of the tar, not rocket science.

@anon88919003 Just to confirm that I understand the installation process correctly.

So I just can manually copy SYSTEM and kernel.img from the tar and should have a complete 8.90.4 installation.

I don’t understand your question, CoreELEC only consists of 2 files SYSTEM and boot.img, just replace them like I said previously.

Then try to apply the update again once you are booted just to make sure future updates will work for you.

Thanks, thats clarifies it for me. I was not aware that CoreElec consist of two cpio archive files, only.

I have been trying all the instructions for update auto and manual as described above but no luck, my hub doesn’t update to the latest version. Stuck with 8.90.3.

You can’t be stuck at .3 if you copied over the .4 SYSTEM and KERNEL files to the SD card. (don’t forget the accompanying .md5 files)

After initial problems I managed to update to 8.90.4 by copying the sytem and kernel files onto the SD card.

First I copied the files under target from the tar archive to the SD-card. And the box boots to WEOS, only.

Alternatively I extracted the files from the .img file. Then I saw the differences in the naming of the kernel files.

The naming of the .img files are the same as the old .3 files on the SD-card. So I copied them onto the SD-card. And it finally boots into CoreElec 8.90.4.

Same issue over here… Wetek Play 2. Auto-Update or manual update don’t work. Had to copy over the 4 files manualy and rename the KERNEL ones.

What exactly did you do?

You can’t be stuck at .3 if you copied over the .4 SYSTEM and KERNEL files to the SD card. (don’t forget the accompanying .md5 files)

On my Wetek Play 2 i copied the 4 files from the target folder .tar archiv of 8.90.4 to my sd card and reboot. after the reboot CE starts fine, also Kodi.

I have copied the the .tar of 8.90.4 after the manuel update to the .update folder and reboot, and the update was installed correctly without an Issu and CE and Kodi work fine. 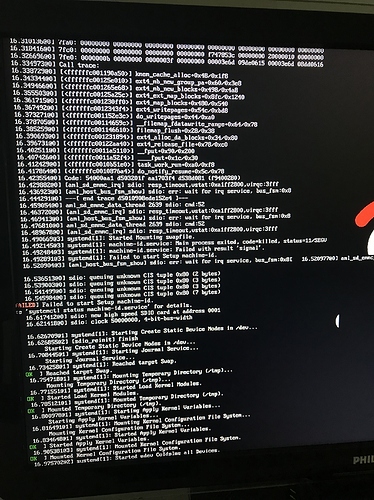