And it’s actually lived about as long as its title. I first booted it up in mid-2017, and it’s been continually running ever since. It has seen several forks of the Open/Libre/Core Elec over the years, and multiple televisions of ever increasing size and resolution.

But sadly it didn’t live long into 2023. A few days ago I turned on the TV, and was greeted with a frozen image of the Kodi screensaver; it was unresponsive to the remote control.
After I power cycled the box, it refused to boot - not even showing the initial boot logo - from either SD card or NAND.

It nearly made it to six years! What a valiant box! Lift a drink to it tonight.

I’m just sad that, upon looking for replacements, it seems like everything is more expensive now, and sometimes not as stable or well-supported?

Actually, they have come a long way. Of course, you will need to spend around $50 USD, but you get a lot more for your $$$. You will get 4GB of memory and 32GB of storage.

When I first started purchasing these boxes/sticks, they were around $30 USD, but there was NO Dolby digital, and the video codecs were limited. As I recall, the RAM was only one gigabit or less and the storage was very small.

Here are a couple of my first “sticks”. I ran my Tvheadend server/client (OpenELEC) on the Beelink MK808B Plus. The other one is a Tronsmart Android stick with Rockchip SoC. 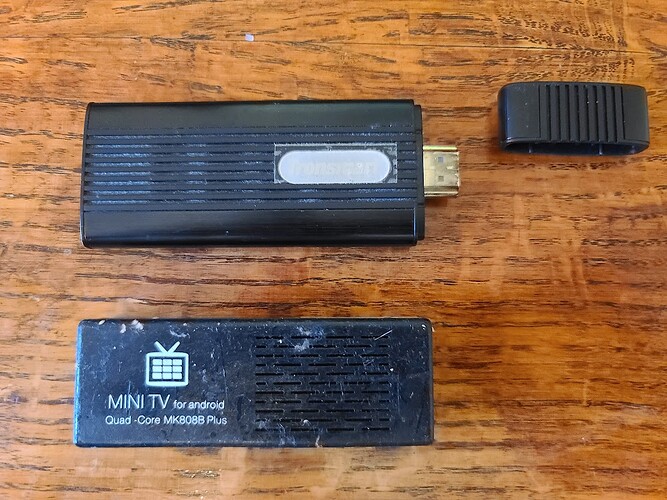 I have a very old mini mx as an offsite backup server that also serves as an emby server. Rock solid on coreelec 9.2.8 I think. I don’t touch it because it just keeps working, it must have an extraordinary uptime. Since there was last a power cut there I guess, which doesn’t happen very often here.

Here in Australia, it was harder to find new boxes. Beelink seems to have gone up-market, with their boxes now costing hundreds of dollars. I ended up ordering a Ugoos X4Q from Aliexpress, as that brand seems to have an alright reputation on this forum. Still ended up costing AUD$160 though. (For comparison, my Beelink cost AUD$60 back in the day. Although I suppose the exchange rate was stronger then, too)

Fingers crossed the X4Q works out well. It sounds like it only works on the latest nightly releases right now.