Noticed no channel icons using info key. Everything else appears to working very well including guide icons and also show images. Also meson-ir with RC6 (RCA) remote works out of the box. No lirc needed. oh my

Is there some setting I’m missing? Was using Libreelec 8.2.5 don’t know if this is something with 9x issue

Thanks for your work 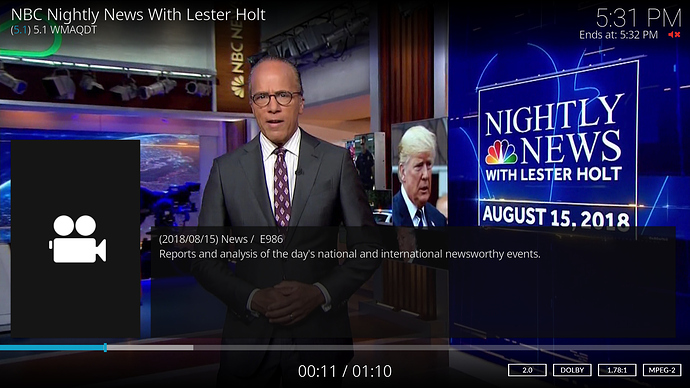 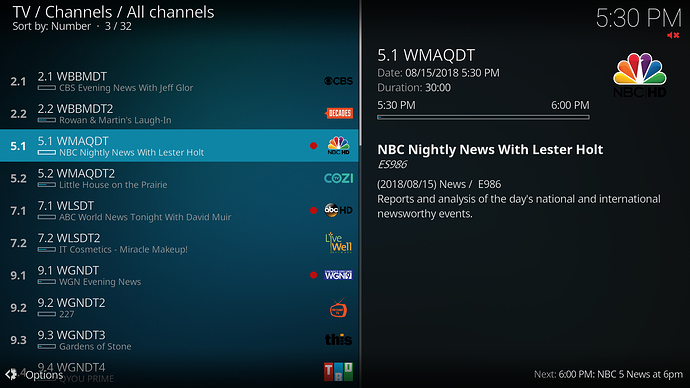 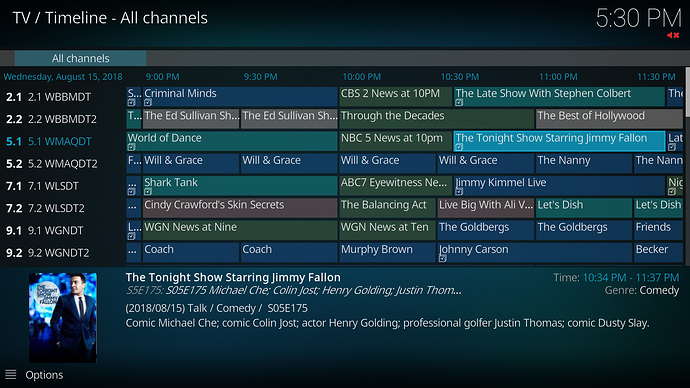 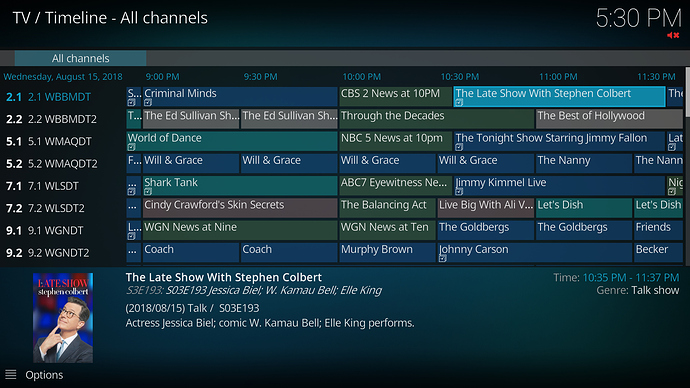 Surprised nobody’s seen this. Anybody using TVheadend as backend?

Surprised nobody’s seen this. Anybody using TVheadend as backend?

Hi, i’m using it on daily basis and it works for me.(8.95.0 / 4.2.6) The only thing I’m not sure if I’ve done some customizations which could affect it, besides the fact that I have a custom icons folder where I have my channel icons stored.

Any change if you clear the image cache under TVH gui?

The channel icon here is in the bottom left corner, in place of whatever pic is shown in yours. 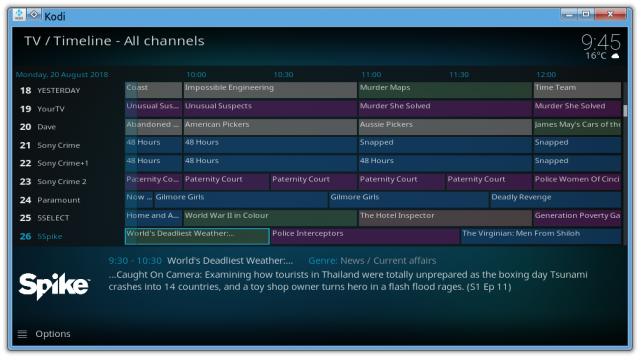 The channel icon here is in the bottom left corner, in place of whatever pic is shown in yours.

But is it also visible if you watch a channel and press the info key while watching? (Like the first screenshot where it’s missing)

Is this what you mean? 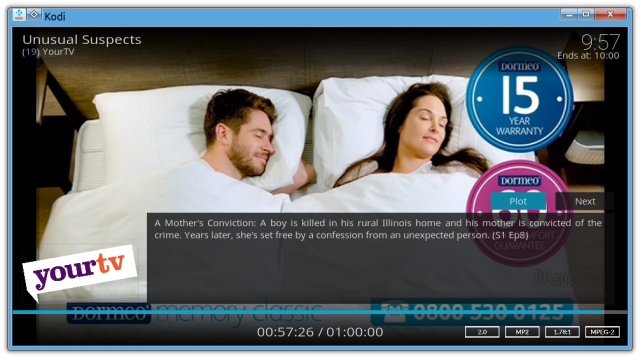 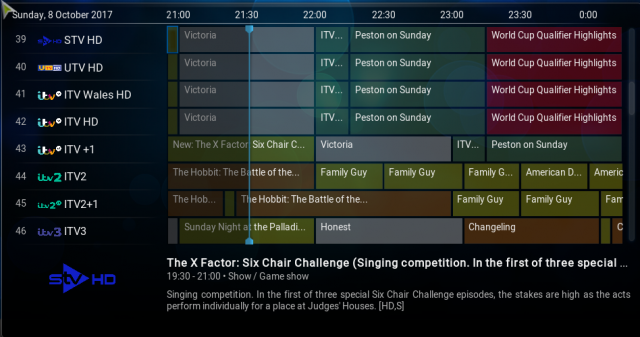 I don’t know if my difference is due to a different setting or some other reason, as I prefer clear text to distracting (to me) icons

I don’t know if my difference is due to a different setting or some other reason, as I prefer clear text to distracting (to me) icons

Thanks, exactly the first pic where you have the “Yourtv” logo, which seems to be missing in @bbolin first screenshot.

However now that I look more closely on the other screenshots in the first post, I noticed it’s using program icons (or whatever it’s called) in the timeline view, while seemingly you and I use channel icons.

Yes it appears that channel icons are used for the channel listing and programme icons in the others.

Wow guys thanks for the response. I was beginning to think I was a Dead Man Walking

Yes at least in my case using zap2it there are 2 sets of icons. One for channel and one for program

They both come from the xmltv data. I don’t have any images stored local or configured. Also Only using xmltv grabbers no OTA EPG

What are you using for program listings?

And what are these settings in TVheadend on your systems? (see attached) 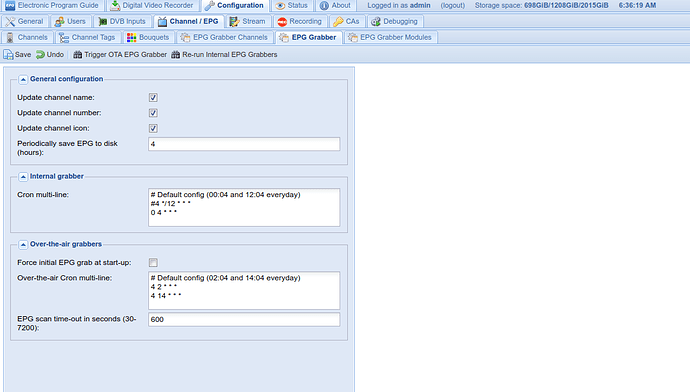 My setup is probably a bit too different, I do have DVB-C and IPTV. For DVB-C I use “OTA” EPG and for IPTV I use an .xml file like you do. I however filter all external HTTP/HTTPS links from my .xml so no channel/program icons come from it.

For program listings I’ve gotten lazy and I download a pre-made .xml file. I used to run WebGrab+ but it requires quite a bit of fiddling and maintenance so I don’t do that anymore. On top of that it consumes quite alot of CPU+memory and since I’m forced to run TVHeadend in a docker container I don’t want to run any other “heavy” software on the box.

if It matters, In the first screenshot I have unchecked all the 3 checkboxes at top. Can’t remember why but probably in order for something else to mess up the channel names or numbers.

In the second screenshot, besides the “Internal XMLTV” I also have the “Over-the-air: EIT: DVB Grabber” selected for DVB-C.

There is some additional configuration options under Configuration -> General -> Base but you have to select “View-level: Expert” in order to see those.

In case you decide to experiment with TVHeadend, I think you can stop the tvheadend service. Rename(or copy) the /storage/.hts folder to something else and then do the changes. Once done restore the original folder.

Using another provider (Schedules Direct) has the same issue

If I go into Guide and select and switch it works. Info key shows channel Icon and description

Never use LiveTV only recordings. I schedual everything

Guarantee if I load up Libreelec 8.2.5 everything works out of the box

Ah, I thought the first screenshot was taken from live tv. I tried it now while playing an old recording and I don’t have the channel icon either.

However under Kodi in TV -> Recent Recordings, I can see the channel icon for the same recorded show.

You can tell it’s LiveTV because the channel number is also displayed in big numbers. I also get the channel icons when looking at recent. Ignore “No information available” because it’s a news show 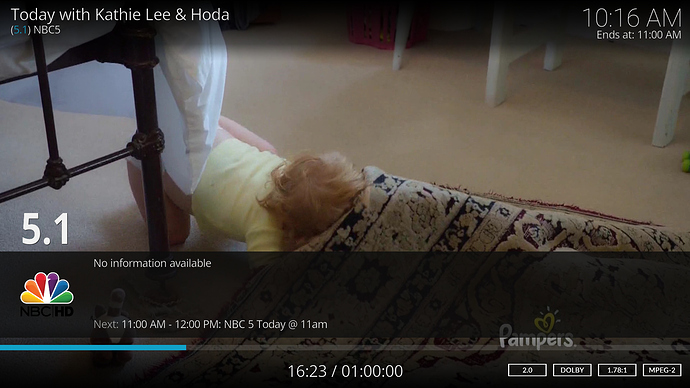