Docker portainer container got so many killed event

This is my first time using CoreELEC. After installing linuxserver’s docker and portainer extensions, “portainer container killed” notification pops up every one to three minutes.

A few days ago I’ve found the Events Tab on portainer page, it shows the container been “killed” every 1 to 10 seconds, then stop for a few minuite.

But the container does not actually been killed, I can access the portainer webpage seamless.

Turning on debug mode and searching for /storage/.kodi/temp/kodi.log find nothing useful information.

I’ve upgraded from 19.20-rc2 to 19.2-rc3, but seems the same. I’ve tried reinstall docker and portainer extensions, but nothing change. 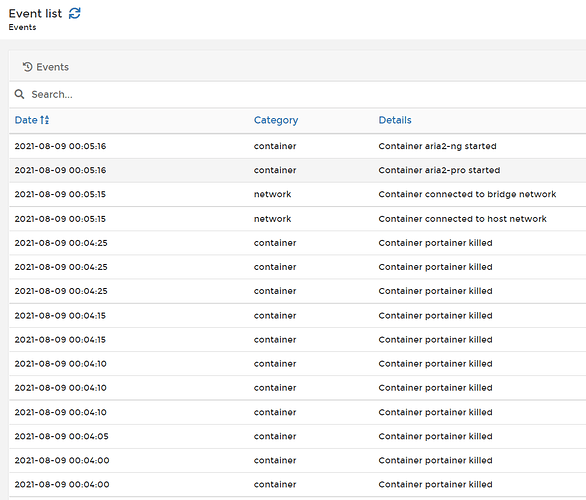 A bit of history on this. To be honest, I’ve stayed on 9.2 because I don’t understand the implications and can’t risk the proper operation of Plex thro docker.

I am using the Docker addon to run Logitech Media Server in the background. I have done this for some time now with Coreelec, and prior to that Libreelec, without any troubles. However, with Coreelec V19, I am noticing that after switching Kodi profiles, I am getting a series of Docker notifications, saying ‘Kill’ - these go on for some time after the profile switch and pop up every few minutes…quite irritating. I can turn the notifications off of course, but that doesn’t seem like a solution…

I’ll follow this thread in the hope it gets sorted.

I don’t trust CE container creation addons because in the past I saw a lot of errors, that’s why I always use SSH commands. My portainer creation command is: 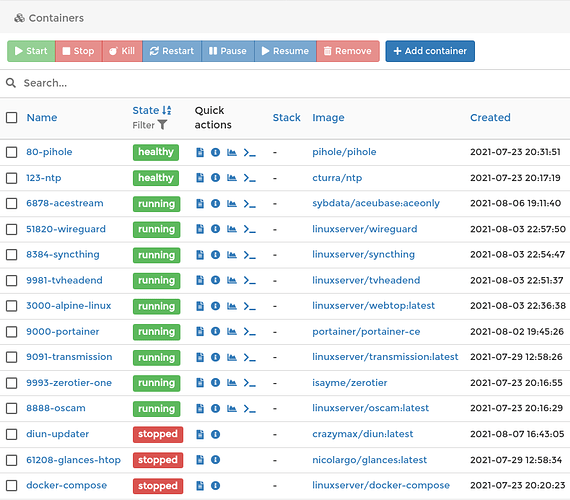 This may mean you don’t get updates to docker/the docker addon, but you can do those manually (if you need to - as it is really just a service runner here, if it is all working, it do you really need updates at all?)

Basically just use the addon to install docker, then remove the kodi side of things and use docker fairly much as normal, works well…have been using it with 19 for a few months now without issues (after I disabled the service part of the addon on).

This is the level of idiot you’re trying to help.

Are you saying remove the three lines from the addon.xml files for docker, updater and plex that vpeter suggested? It stops the kills, I know, but I wasn’t sure if something would break if there was an update. I think you’re telling me that I just won’t get them.

How would I go about installing an update manually in these circumstances? I can run commands in SSH but I don’t understand what they mean.

Thanks in advance for your patience and help.

How would I go about installing an update manually in these circumstances?

Stop the service manually from Kodi and then update addon. Automatic update should be disabled for this addon.

Maybe this is the best solution at the moment.

Is there a way to setup docker service without installing the docker addon?

I have been using docker for over a year with no problems. I know that it is difficult to understand how it works but it is essential to study it in order to use it. My opinions are as follows:

All of that is fine and true, but docker with the use of Kodi profiles IS definitely broken. It’s by design - with Kodi 19, services are stopped and restarted with profile changes. This includes the docker addon and causes the kill messages.

I have some very complex docker setups going here and at work…it’s not the docker config or inexperience with it, it’s specifically the interrelationship between profiles and docker (in the case of my issue).

It is broken for years. For some it works, for some Kodi crashes, some has some different issues.

I think such system docker services should be manually edit to remove start/stop from Kodi and be just ordinary service. Only install/update should be done from Kodi. Of course this is little advance thing. But any little more heavy user could be capable to do that.

(Side point - I’ve used Kodi Profile for 13 years without much issue…as long as you use a Master profile for settings and then sub-profiles for your actual profiles, things work great. They get muddier if you use a main profile master profile, and a sub profile, as then settings tend to get confused…I think most folks start off with one main profile, then add more (which then gets confusing as they behave as sub profiles and inherit from that master profile) = when really it’s best to start with a main, empty profile, and create and actually use extra profiles - whilst leaving that main one there and alone).

I’d personally prefer if docker were wholly removed from Kodi - it just confuses things. Just have a little official install script to curl, that brings along docker and docker-compose.

But then I am quite comfortable with the shell so I suppose for GUI only users that’s no good…but if there were a little GUI runner that just ran that script as a one off (and maybe threw in Portainer for further GUI management of services) - that would work well I think.