DroixS905X3 gig ethernet not only connecting at 100meg

Just bought a DroixS905X3 box and have the device treesm1_s905x3_4g working fine, except its only connecting at 100meg. As I have a 900meg internet connection I really wanted it to connect at gig speed. I have it connected direct to my routers gig port…
When looking at the device trees there is a sm1_s905x3_4g_1gbit but that just wont boot at all. Is there anything I can do? I can connect to wifi but only on 2.4GHz so 144Mbps

Will give it a go later - BTW, the site I bought it from says its 1Gb, see the screenshot 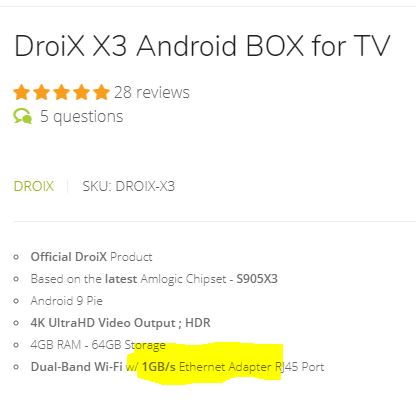 Have emailed them to see what they say - mightily dissapointed as I only bought it as my last box only has 10/100-would be as well to send it back to them! OMG
But You get only 100MBit.
Just another POC from china

Could you use a usb3 to gigabit Ethernet adapter. Only €8.00

Good point! I have one of them lying about! And you are all correct, had it confirmed that its only 100meg, apparently they are in the process of updating the specs on the website…

Download speed 132Mbps - Im only on 150Mbps at the moment, cant upgrade to 900 till Monday so this looks like its working as well as I can expect it to