I am gotten dual boot working with Beelink mini-2 (s905x3). From cold boot, it will boot to CoreElec. From CoreElec I can choose to reboot or boot to Android ( reboot to emmc/nand ).

But when in Android, a reboot will actually boot back into CoreElec. I would like have a choice of from Android, to reboot back to Android without going through a fully booted CoreElec.

I would like have a choice of from Android, to reboot back to Android without going through a fully booted CoreElec.

The only way to achieve a reboot from Android back to Android is to eject/remaove the SD Card.

There is a reboot option on some Android boxes called “Fast Reboot”. Rebooting with that option
always reboots to Android, even with uSD card inserted.

Btw, Android supports various reboot options: Reboot, Fast Reboot, Reboot to Recovery, Reboot to Bootloader, and Reboot to SafeMode. It’s just a question which ones are enabled by manufacturer…

There is a way to reboot back to Android by editing the aml_autoscript, but it means I have to write an apk to edit the script to boot to Android or CoreElec.

This question should be addressed to Beelink. I think that they are working on an Android version that should allow this extra option to reboot to Android rather than CE.

It’ simpler to root the box, if it’s not already rooted, and then install “Reboot Manager” app from Store.

This bootmenu, is it doable on Amlogic devices ? 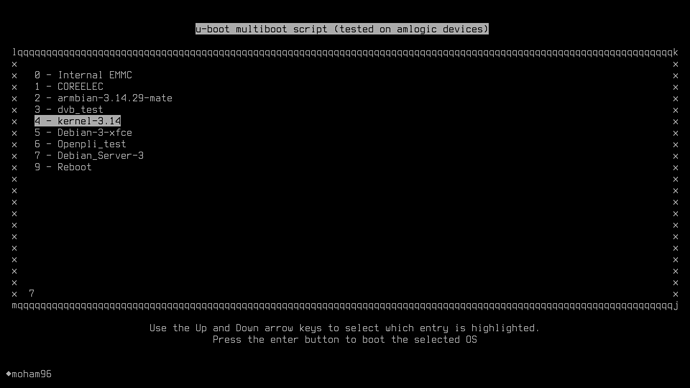 Hi, This is my quick and dirty solution to multiboot any amlogic device(actually it can be used on any device that uses u-boot): Be aware that it is not beginner friendly, you need at least some knowledge about writing and editing u-boot scripts,...

on my box it’s enough to do reboot and coreelec starts itself, it doesn’t require any additional application

from coreelec is an android is known

i have also rebuilt the rebbot to coreelec app from

My Belink S905X reboots to Android if I chose reboot from nand from shutdown menue
Running Android - after reboot CE starts from SD.
If I want reboot from Android to Android I remove SD card.
I don´t understand what You wanna do ?

I’m investigating various options because the rebot from android to coreelec is a bit slow, and I’m looking for solutions. I don’t know if I will find them in this way, or I will have to look for build.prop modifications.
for fast reboot or quick start

maybe there is a simple command to do it

WARNING:
If you don’t know what you are doing, just don’t do it

just add these 3 lines to build.prop
1 line is not required

the rebot from android to coreelec is a bit slow,

Are You kidding me ?
We are talking about seconds.
How much time did You spent for searching ?
I´m to old to understand

I´m to old to understand

I do not judge

Is there a way for me to close this thread ? I think I have gotten all I need from the thread, it has served my purpose.

I figured that both CoreElec and Beelink will not do anything about this. After all it isn’t a big problem to reboot back to CoreElec then go to Android.