Getting started with kodi and coreelec

Hi, I’m new to coreelec and kodi, but not new to Linux, administration, and working with SBC devices.

I’ve just purchased a Beelink S922X and have successfully installed coreelec on it. I’d like to be able to use it to stream live TV, movies, TV shows, and access the SMB shares on my local network. I’d also like to configure SSH.

What’s next? Where are the docs (video?) that explain next steps? I’ve searched quite a bit, but they all make assumptions you’re either already able to get to the command-line or are otherwise missing pieces I don’t understand.

Do I now need to install Kodi? Or is the front-end I see when it boots Kodi itself? With some other devices I’ve played with in the past, the front-end was different, and had more of a media box look to it, where it was possible to stream shows from the Internet. What am I missing?

Should I be installing these apps using the Play Store or the AppMarket?

What you see when you boot CE is Kodi.
You now need to configure Kodi to do what you require … via the add-ons available through the Kodi repository.

It is all basic Kodi so you will find all the required info through the Kodi site, wiki and videos.

I do not understand your doubts, if you have them look for information. I will make a summary of CoreELEC. CoreELEC is a Linux operating system with aarch64 kernel that works on Amlogic processors, which allows 32-bit Arm applications to run, which does not have a desktop on which applications and services run except Kodi.

Kodi is well known and there is a lot of information on the internet, search Wikipedia.

To learn more about CoreELEC you will need to activate the SSH server on the device and an SSH client console, and learn something about Linux commands. This will also allow you to transfer files using an SFTP client.

The service installation mechanism is mainly through the Kodi-Addon-repository, CoreELEC-Addons and third-party repositories, all of them for Kodi. CoreELEC also allows you to install entware services that are installed from the SSH console and configured either from the SSH console or from the web server of the service.

If you have problems accessing through SSH, check the Kodi configuration, take note of the IP address and configure an SSH password you remember (some passwords may not be accepted, I recommend using only letters and numbers, minimum 8 characters) .

It appears the problem is that it doesn’t appear to actually be flashing the device with the coreelec image despite it saying that it’s done so.

In other words, I’ve downloaded the 9.2.1 stable image, flashed it to a 2GB microSD card, copied the g12b_s922x_beelink_gt_king_rev_a.dtb to the root as dtb.img and rebooted the device.

It appears to go through the coreelec install process where I configure language, wifi, etc. After power cycling the device, the image shown here is what I see. 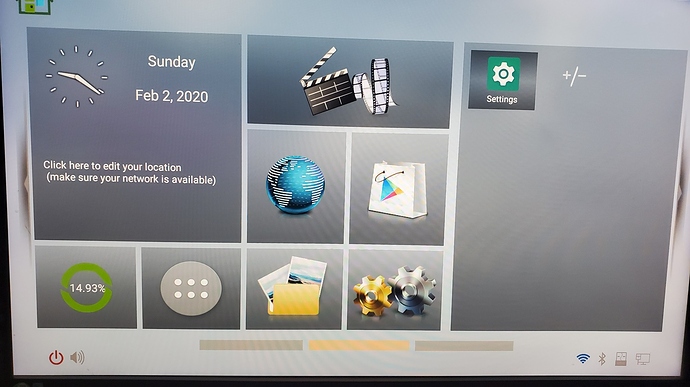 It boots from the SD card … did you take it out when rebooting?

Yes, I shut down the device, ejected the SD card, and plugged it in.

Put the SD card in and boot from it.

Your settings and changes should be saved on the Storage partition of the card.

Always? The card must always be inserted? It doesn’t flash the device and replace the existing OS?

That can be done, for some devices, but is supported for a specified few devices.

There is little difference in performance between booting from internal and from SD card.

CE is a ‘live’ system, which is very small and runs from ram.
Changes are saved separately and loaded at boot time.

Got it, thanks. Not sure how I missed that.

How do I identify which image to use from the daily’s? There isn’t one that explicitly says Beelink GT-King or even S922X…

Try the Generic image and see if it has a suitable dtb.

For the GT-King use the generic -ng build. Then choose the correct device tree. You can try GT king revA or B depending old your device’s revision. To use it from emmc you can search for ceemmc in the forum though it’s not supported officially in the king.

It’s only in the generic stable build, not the nightly. Guess I’ll stick with that for now.

Today’s nightly was removed because it had a small problem to some users. You can search for old nightlies from this link http://coreelec.pokey.de/

I have a related newbie question. I’ve purchased the Beelink G-King that has the S922X rev-a chip for around $140 from amazon.

I just found the “ODROID-N2 CoreELEC Edition” which appears to have the same processor and same amount of memory for $67. Through collaboration between Hardkernel and the CoreELEC team, the ODROID-N2 has become an even more powerful media platform. CoreELEC is a next-generation media center OS built specifically for the best functionality and amazing output picture...

Is this basically the same system? Can I switch the SD card from one to the other without having to reinstall?

Is this basically the same system? Can I switch the SD card from one to the other without having to reinstall?

It runs CoreELEC so it is the same system.
You can take a back up of your Beelink and transfer it to your N2 after install with a new SD Card for N2.
Not sure why you want to use same SD Card for 2 boxes/boards.
You need the correct dtb.img for your hardware on the SD Card.

I’m now having trouble with the PopcornTV add-on. It appears to have installed properly, but it says there was an error starting it and to see the logs for more info.

The logs are enabled, and I see other system messages reported there, but nothing relating to popcornTV.

Am I looking in the wrong place?

What would be something I could investigate to determine why this addon doesn’t work?