I couldn’t find your pull request on the CoreElec repo, so I cloned your fork and it’s currently compiling.
As soon as I get around to testing I will let you know. If everything goes well, mind if I post a compiled version on the topic I linked to help out the people struggling with the same issues?

Running into an issue on the compile, seems like it can’t fetch the amlogic source

Initially tried to compile on a rock64, when that failed I tried the RPI3 (which gave me a nice msg about not being able to build on raspbian). Currently it’s compiling on a x64 chip, now on linux:host step, since it’s not crashing instantly I think it’s working.

But with your help I forked your repository and made the change as mentioned in topic I linked, changed the code and pointed the coreelec package.mk for the addon to my new repository, compiled it and now it the grabber has the correct colors

I noticed that they changed the code a bit since last time someone looked at it and it might be that something isn’t enabled on my system.

But if ENABLE_AMLOGIC would’ve been true it would’ve done that automagically, so seems like a bug or something in my config?

Anyway, here’s a link to the compiled addon in case anyone needs it: https://github.com/MunkeyBalls/hyperion.ng/releases/download/0.1/service.hyperion.ng-9.2.102_RGBfix.zip

I updated the Hyperion.NG Addon at CoreELEC. I am not sure if it get updated in the Repo as Nightlies are switched off right now. So here the link to the new version if someone want to load it:
https://test.coreelec.org/Portisch/service.hyperion.ng-9.2.102.zip

Be aware that the Hyperion.NG configuration file changed from hyperion.config.json to hyperion.db. I found no way to convert the json config into the database config, so you have to setup a new config by the Hyperion.NG web interface.

@MunkeyBalls I am not sure about the change. It looks like a “old” bug from hyperion (before hyperion.ng). But I guess a lot of users are switching the colors on the LED hardware like me. So I am afraid breaking a running system.

What did you change?
Im asking because I do not have any problems and I ask myself if i want to “change the running system”

I changed nothing, I just updated to the current status of the master branch of Hyperion.NG

Updated and reconfigured and working fine, thanks!!

same here.
Import of old config did not work. I had to redo the settings.
Now everything is working again. Thank you!

Tomorrow should version .103 available in CoreELEC repo with some big improvements: https://github.com/CoreELEC/CoreELEC/pull/226

External grabber should work now and WebUI preview is fixed.

Yes I think so.

This is great to see.

I’m new to plugins in coreelec.
I have coreelec 9.2.1, under plugins I’m seeing version, 101,
It looks to be the version from July

What should I be doing to see newer versions?

I think you need to use the nightly image of CoreELEC.
But you also can download it here: https://relkai.coreelec.org/?dir=addons/9.2/Amlogic/arm/service.hyperion.ng

Then just install it with the ZIP file mode in Kodi User Addons.

REMEMBER: since .102 the user config structure changed and you have to setup a new config by the WebUI of Hyperion.NG by access the WebUI: http://<your-box-ip>:8090

I am experiencing that when I reboot, hyperion starts but didn’t show the rainbow.

Hyperion it’s started but the leds doesn’t turn on, if I go to the webUI I see in remote controls that the amlogic grabber is not selected due to the priority, effects appears with priority 0!

Can I modify the priority values?

In standard hyperion I remember that I can define the priorities in the json, but now?

This is what happens after a reboot, didn’t show the rainbow and it keeps “freezed” in hyperion, and because that, the amlogic grabber don’t work.

Whe I press the clear all effects/colours button, then amlogic grabber starts to work. But I have to do this manually everytime. 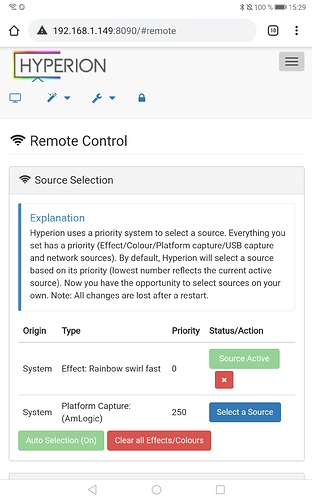 I jsut have done a clean install of .103 here and it shows me:
System Effect: Warm mood blobs Priority: 254

But I do not know where and if it is possible the change the priority.
I am sure @Paulchen-Panther knows more about it.

is there a way to disable Hyperion while in Kodi menu? I do not switch off Corelec box and end up with backlight, so everytime I have to physically unplug hyperion hardware. It’s very annoying