I recently migrated from LibreELEC to CoreELEC, due to lack of support of Kodi 18 for S905. Didn’t learn of CoreELEC until I had everything configured, otherwise I wouldn’t have bothered with community builds. Everything seems to be working great except this kinda odd encode of 4:3 content which was upscaled to 1080. The file is 1440x1080, in LibreELEC 8.2.3.1 (Kodi 17.6) it was played correctly as 4:3, but in CoreELEC 8.95.6 it is stretched to 16:9. Other SD 4:3 content is played correctly with vertical letter boxing. I tried CoreELEC 8.95.1 after I came across a post about something regarding 4:3 content being broken since 8.95.2, but it didn’t make a difference.

You forgot to set the correct view mode?

if you mean in video settings, then I tried both normal and original, no difference.

Can you upload a sample of your video, thanks.

The only thing that fixes the AR is changing the pixel AR.

This is a “special case” because this resolution can be played in proper 4:3 format or in proper 16:9 format if anamorphic aspect ratio is used.

This sample plays correctly if you in go to Video settings and set "View mode => Stretch 4:3. No need to play with pixel ratio.

Look up on Wikipedia how “Anamorphic” works. Or maybe this article can shed more light on the subject.

I’ve experience this on all iphone 5s created videos. It seems to start when kodi added a video setting
“orientation”. To fix it, you need change the orientation setting to 90 while playing.

Two HD channels of saorview.ie … RTÉ One and RTÉ 2 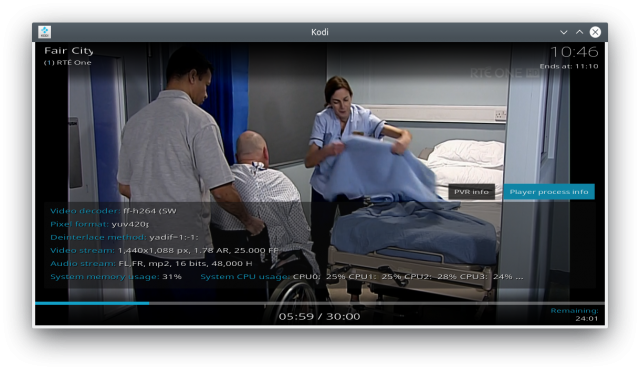 This is a quote from @afl1 when we discussed this in the team chat.

What is correctly? For HD is no 4:3. For 4:3 in HD is used 16:9 with black stripes. If we remove this patch we fix this shitty movies only and damage all HD lite content.

The issue is fixed. Try the latest nightly builds.

I noticed similiar thing, with that 1440 resolution, but 16:9 content.

But problem is, that certain LIVE TV (TVHeadend) has 1440x1080, Normal TV with own tuner plays it as 16:9 (it should be that way), but Live TV through CoreELEC + TVH shows it 4:3. Its exactly as described here https://forum.libreelec.tv/thread/1542-solved-incorrect-aspect-ratio-with-some-tvheadend-channels/ or here https://forum.libreelec.tv/thread-200-post-5921.html#pid5921.

within DVDVideoCodecAmlogic.cpp, so I guess maybe those m_hints.width etc are not propagated during Live TV as for example this patch did in past for h264 content, where users reported same issue https://github.com/tarvip/SPMC/commit/888e68177cfe01de9ca53f53194d42c44840cd1c ?

I observed this on both 3.14 and NG builds, and honestly I didnt noticed before. Maybe because in my country was recently switch from DVB-T MPEG2 to DVB-T2 HEVC terrestrial, so no possible h264 patches would apply on that source.

@afl1, maybe you could check this? Its hard to reproduce this, as again, same as before, when I record stream, its played fine, 16:9. The problem is, when its streamed live from DVB-T2 stick