I have two amlogic boxes, a alfwawise h96 Pro plus, installed super celeron Rom on internal, then have coreelac on microsd…so know have to use Rufus to write image, the copy relevent STB file, rename, and so pin reset.

The second box is a x96 max plus, so downloaded the different image, wrote onto microsd, copied and renamed dtb file.

Doing pin reset, it hangs on bootup image, on the world image. It doesn’t come up with corelac logo or progress to install/partition.

Another issue not relevent to corelac is I can’t learn the IR codes onto my URC mx-850 remote.

The second box is a x96 max plus, so downloaded the different image, wrote onto microsd, copied and renamed dtb file.

Doing pin reset, it hangs on bootup image, on the world image. It doesn’t come up with corelac logo or progress to install/partition.

Is your Hardware POSSIBLY

I guess I could try the 2gb dtb file, if that works…

Am I stuck with just using Kodi within android? Bit annoyed!!! 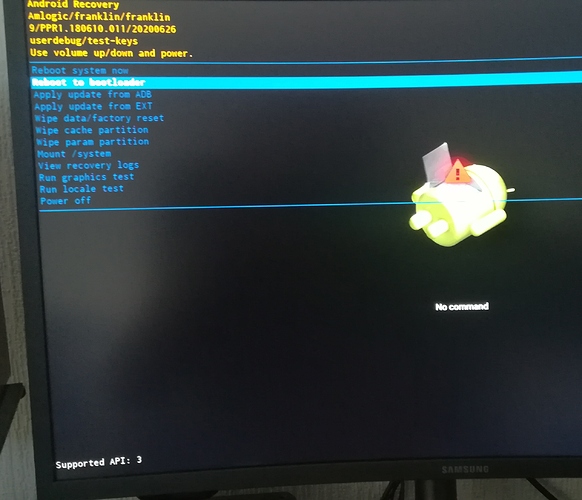 It looks like you have firmware dated 26th June 2020 which may be different to others with this box.
This will have to be confirmed with other members using this box with CE.

Please test in Android to make sure this box is definitely running Amlogic chip.

From memory it said amlogic A55 Franklin. 4gb/64

Whats more annoying is playing back mpeg2 is juddery, yet on s912 Android/Kodi or coreelac Kodi it’s smooth. And this is a newer faster box.

I only recently added coreelac to the s912 as never really looked into it, as Kodi in android worked well, I guess more advanced features like proper frame rate adjustment in coreelac but didn’t notice issues with 24hz material so just left it…but now with his 905x3 has issues with standard def.
Also doesn’t play some files, that work on the s912, some unusual Japanese h264 girls und panzer (audio but no video) 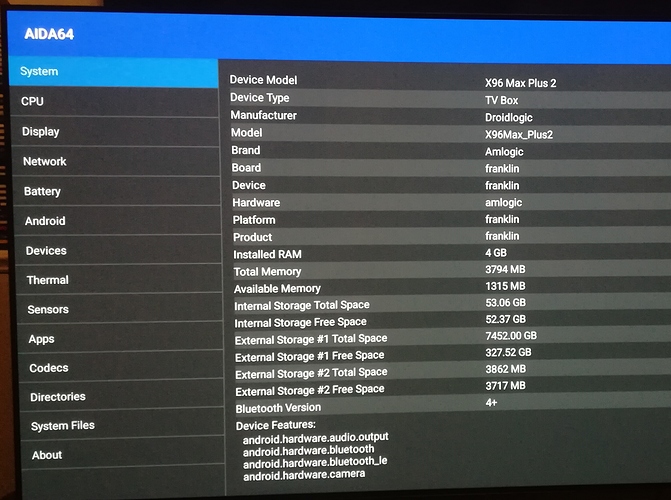 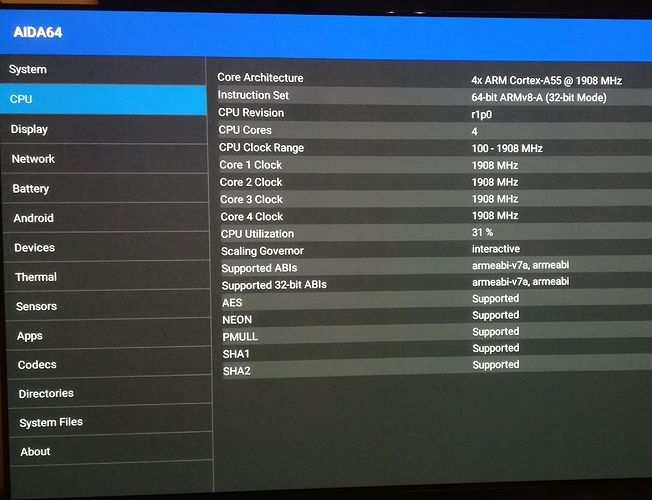 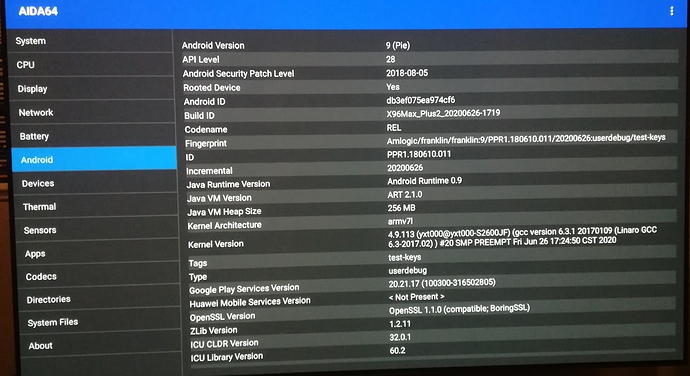 @rccardude
I’m leaning towards the Android Firmware causing your inability to Boot CE from SD Card.

Off topic as far as your hardware goes but this is what happened with a recent Android TV update i did on a Vim3 .
I was able to bring it to the attention of the Rom Builder here.

No idea who you would be able to contact for your hardware.

What firmware can I use for this box? I read with superceleron I’ll lose reset button.

I have no idea what Firmware you can use.

Superceleron example i used was to show you what happens with an update to Android.
I’m using a Khadas Vim3 which has a helpful community of users and Rom Builders.
The guy who builds the Rom responds to issues and uses CE as well.

You purchased a box with ZERO manufacturer software support so you now have to search
the Interweb looking for a Rom with working uBOOT.

I was hoping someone with this box might help you in comparing your Android dated Rom to theirs.

Long time no speak. Hope you are keeping well.

I have two friends here who purchased the X96 Max Plus 4/32GB X905X3 box on my advice and I set up for them the fast 16GB SD cards to boot into CE 9.2.4.2 I prepped the cards properly and first booted them with no problems on my 4/64 X96 Max+ box and all was working fine. I am pretty sure it should make no difference using the SD card firstly in my 64Gb box and then they trying to boot it in their 32GB same model boxes as the storage partition is created on the SD card on first boot and not in the internal memory. However we cannot get the SD card to boot on their 32GB boxes both which they ordered seperately directly from a very reliable Chinese supplier in Shenxhen who gets the boxes directly from the factory and with whom I have dealt with for years. I thus recommended that supplier to them. So I am pretty certain the boxes are genuine and not clones.

Have tried everything with different DTBs etc all the usual stuff as I am well familiar with setting up these SD cards for booting into CE. At first I thought it was maybe a faulty box with the first friend but when the other friend had the same problem a few days later then I knew there is somehting different about the latest X96 Max+ boxes to mine.

So I search the CE support forum here and came across this thread. So seems it is the UBoot on the new Android firmware. So what can I do to help them as I feel responsible to both of them ?? Will a fix be forthcoming on CE build or DTB though if its a UBoot problem I cannot see how this can help.

Your advice would be very much appreciated.

As a sudden thought would it be worth trying to boot into CE from a bootable USB stick instead of the SD card. My limited knowledge of UBoot is not good enough to know whether that might work but my feeling is that it wont. Is it worth a try or not ??

How far into not boot are you getting ?
Fresh install the SD Card or try USB.
Does CE go into install progress and freeze on CE splash or something else after install boot.

Hi Kostaman. Thanks for getting back to me/ It does not even get to the CoreELEC logo screen. It either freezes with the X96 logo or that goes off and get a blank screen. I have tried both the toothpick method and the Android Terminal Emulator app withthe reboot update command and gives the same result. My secodn friend says he gets the same problem too but booth of them are not local to me here so have to work with them on the phone.

Tried that link but I don’t speak Russian lol. I’ll look again and see if I can derive anything from the video anyway.

Yes treid a complete fresh install and a reformatted and set up SD card but same result. Not tried a USB stick yet but will do if you think it might help. I did test both these SD cards in myhown X96 Max+ 4/64GB box too and they both worked perfectly booting up straight into CE with the toothpick method.

Only a UART log will solve your issue.
Open the device and and search for the connection.

Or you get one SDIO adapter:

I have now got my friend to prep a CE bootable USB stick and this in one of the two USB sockets brings up the Android recovery screen which I told him to shut down teh box and try again with the other USB port. The second USB port gives the same symptoms as the SD card did with it stuck on the X96+ logo screen. Both times that he tried in each of the USB ports he used the toothpick to hold in the reset button. Once he removes the SD card (or USB stick) the box boots normally into the default Android OS.

I have a hunch that they may have as you say changed the uBoot ROM in the boxes as it only seems to be a problem with the 4/32GB X96 Max+ box as I have now heard from another friend in Bangkok that he changed his X96 Max+ 32GB box which would not boot for a 64GB one and that booted from my prepped SD card immediately into Corelec using the toothpick method. Though I have a local friend here with the 32Gb box he purchased a few weeks ago and that is fine with CoreELEC. So my hunch is that as the 32Gb box is cheaper it will be more popular and sell much quicker thus any newer box with a new UBoot ROM will have come through the supply chain quickly whereas with the 64 GB boxes there are propably still the older stocks available at the retail suppliers. Just a hunch though I must add.

Finally I have asked my supplier contact in Shenzhen to directly have a word with the factory technical support guys where they make this X96 Max+ box to see if he can find out what is possibly causing this problem. I will of course feed back here any info I get.

In the meantime anyone buying this otherwise excellent box should opt for the slightly dearer 4/64GB version and let us know here if this problem occurs with that version, just make sure you can return the box and exchange it before you buy though. Hopefully soon we will have the answer to this problem.