Khadas to release a S922X board

Some might be interested to see that Khadas have designed a S922X board which they will call the VIM3:

I envisage thermal issues without a built on heatsink, and I also question the usefulness of a single lane PCIe bus when its only going to be available through the GPIO’s.

I can’t see this been a serious competitor to the N2 as its likely to hit the market at +€100 given their previous offerings. Their maybe some niche market of embedded systems where the AI co-processor is an asset.

Has a lot of features, bluetooth, wifi, M.2 slot. Wonder if it can do NVMe with four lanes, that would be something.

Wonder if it can do NVMe with four lanes, that would be something.

According to the khadas forum it can do only one PCIe lane as it is all what S922x is supposed to support (https://forum.khadas.com/t/khadas-vim3-is-launching-soon/4103/5).

We have sent them an email requesting samples for our team so we can add support for it, the ball is in their court if they want to work with us and have the same great relationship with us that we have with Hardkernel.

It is PCI-E 2.0 x1, so it has essentially the same bandwidth as USB 3.0 does.
I would say that this can be useful if you are using the device as an actual computer and need the fast storage, but for CE purposes, I don’t see how having NVME is more useful than plain old USB 3.0.

From what I’ve been reading will be 3 models!
This is only the first to be released.

SuperSpeed USB is probably better since the media is generally cheaper.

Now if the board could support even two lanes you would get a nice boost in storage speed. I put a brand new model Samsung NVMe drive in my late model laptop and it’s sick fast, gets over 3k mB/s on both seq read and write, of course that’s 3.0x4. 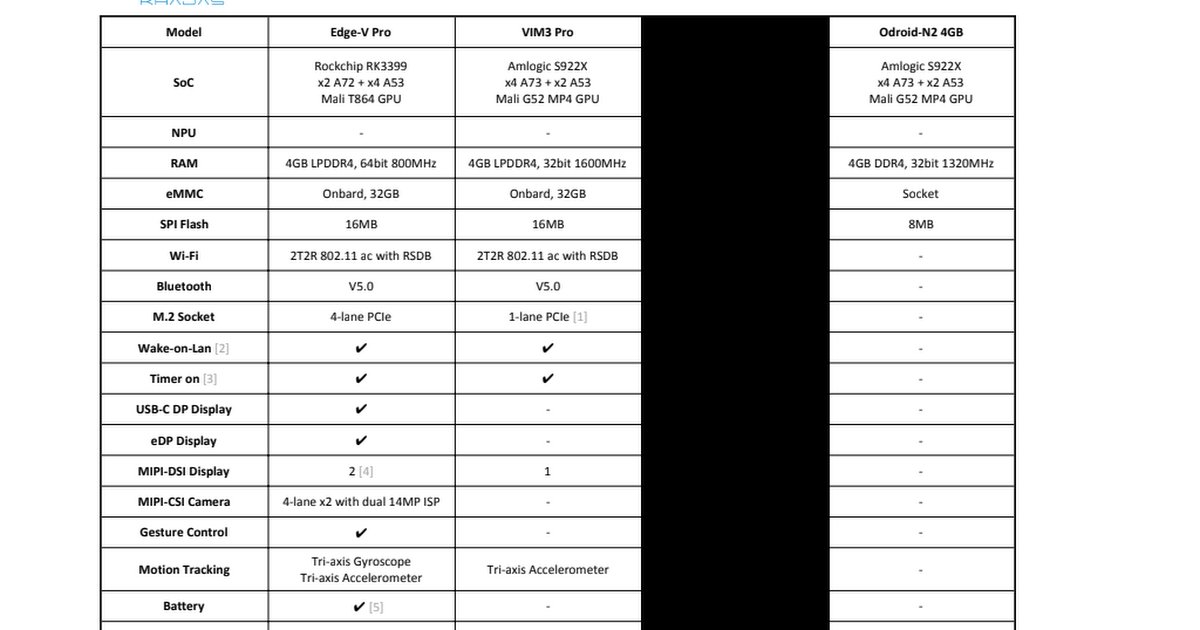 Not a fair comparison with no pricing or mention of the heatsink which is another $25 from Khadas, seems like a marketing stunt.

price wil be released next week

Hi Everyone! Gouwa has awesome news regarding the #VIM3 price, that’s sure to turn some heads!

Nice Price… what about Support??

“This special launch price for the #VIM3 will end on 22 July 2019. Stocks for our first production batch are limited, not everyone will be able to get #VIM3 at these low prices. Khadas will be announcing a small “competition”, to see who will be eligible!”

I try to get one

You’ll have to enlist to “Hunger Games” before that

As has been stated before for any new hardware, support comes after the developers get hardware samples. Which in this case will hopefully be in the next several weeks.

This comparsion is full of wrong information:

N2 supports both RTC (Timer) and WoL from both suspend and poweroff state. In fact it was our developer @Portisch to make WoL work because it is broken in the bsp Amlogic source.
Also the N2 is the only g12b device that can do wake on CEC because this is broken in Amlogic close sourced bl blob. All is working in CoreELEC.

The price will definitely be higher than a N2 after the promo.

but it has WLAN an Bluetooth an EMMC on Board

WLAN and Bluetooth are pretty irrelevant - I stuck a £2 bluetooth usb in my s905x box, works perfectly, and usb wifi is simple / cheap to add if needed. The emmc is worth having - even oif internal install isn’t supported you can boot from sd / usb and use it as storage. Any more than 8GB is just empty space for me though.

For me the issue is that Khadas did almost nothing to offer software support for their board after releasing the initial Android versions, the version of Ubuntu they released was fairly generic and never offered anything but software accelerated graphics. When they released their own dTV board they simply used the generic software that the chips came bundled with and did nothing to port drivers into Linux.

Basically they release fairly good hardware and then wait for the community to do all the heavy lifting of developing real world support. This is night and day different to Hardkernel’s approach.

Coupled to this is the inexcusable lack of a decent heatsink and durable case.

Is the VIM3 going to be any different to the VIM1/2 in terms of support - I very much doubt it.