To begin with I’m not referring to the 23.98fps issue, which was resolved years ago (OpenElec), but rather the odd glitch. Obviously it can be just hardware but I’m wondering if I’m missing something? Here’s a few things I’m thinking may improve playback performance.

It may be that I’m just sensitive and most of you accept the odd judder but does any box, even the expensive ones, play video perfectly?

Be interesting to get members thoughts on this ‘The Holy Grail’ of TV boxes?

but does any box, even the expensive ones, play video perfectly?

Wrong question.
Yes, there are some very good boxes, simply the best -> Odroid N2
But You will ever find any kind of video which is not playing perfect.
There are a lot of special encoded video files in the world, some of them will not play perfect.

So do we suspect boxes like the Nvidia Shield are a waste of money if you just want to watch video?

One possible fix I’ve often considered is turning off ‘Real Cinema’ on my old LG as the TV status says 24p even with it off! I suspect I’m getting much less judder but only time will tell. Not sure why this would have any effect but every TV has it’s quirks. Maybe the 24p option (Real Cinema) was a standard that is just outdated as most TV’s have auto frame rate switching so is kind of obsolete.

So do we suspect boxes like the Nvidia Shield are a waste of money if you just want to watch video?

And it does seem like this ‘Real Cinema’ setting on my LG TV’s could be a problem. A few things I just read suggest it monkeys with the frame rate so as to fit into 60Hz maybe because of the ‘True Motion’ farce!

Anyway think turning off 'Real Cinema; has made a real difference!! LOL

Might invest in a premium cable although the one I’m using was expensive but is 10 years old so may not be able to handle higher bit rates. Any evidence that low quality cables can cause judder?

Any evidence that low quality cables can cause judder

I will ask You one question.
Why would You buy a low quality cable ?
Premium cable price is about 10-20€
No need to pay 100€ or more

I wouldn’t buy a crappy cable but I would hope that it conforms to the standards specified. So I’m thinking of upgrading to something like this (just to see if it improves motion): https://www.amazon.co.uk/gp/product/B078WDKSYQ/ref=ox_sc_act_title_1?smid=AEB9F56C3A3O6&psc=1

I think bit-rates do make a difference but we were all told years ago that because it’s digital any cable would do. Obviously as standards have changed the data pipe has increased meaning the quality of the cable is a factor. What effects are caused by poor quality cables? No deep colour? Image artefacts? Possible frame-drops? Don’t know as I’m no expert.

For the record and in my opinion Plasma TV’s generally have much smoother motion (more forgiving) than LCD’s. I have both but really would love an OLed.

Cable looks like it’s a good spec.
What you are looking for is the data rates for 4K and a robust cable.
There are other cable recommendations on the forum but I have 2 boxes running without issue using the below cable: 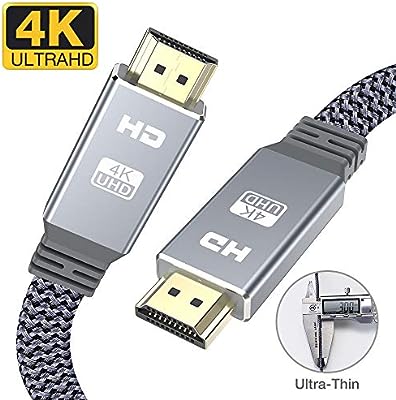 The reason for this is the lower profile connector for use with Khadas boards since the HDMI is very close to the power connector.

This is my current cable which is probably fine as it does say 18Gbps but I did buy it 10 years ago: https://www.amazon.co.uk/gp/product/B0031APPM4/ref=ppx_yo_dt_b_search_asin_title?ie=UTF8&psc=1

So I’m wondering if it conforms to the standard required? Perhaps but I might just be spending money when I don’t need to!! Pisser!!

I don’t currently watch any 4K content which at 60fps is going to be much, much higher than 1080p.
So it seems the other specifications of cables are more important than simply the bps. Obviously 4K content needs a bigger pipe.

I’m amazed that after all the articles written over the years about the HDMI cable rip off that people are still willing to pay through the nose for them.

I would not dream of paying £10.99 for one from the likes of Amazon when I can have a wide choice and far greater value from other stockists and if you shop around you can get 2, 3 or 4 for the same price.

So are you saying that even the most basic 10 year old cable HDMI is as good as an 18Gbps cable? Yes it’s a digital signal but isn’t a quality copper core going to reduce errors etc?

I don’t know as I’m not exactly aware what the difference is between the different HDMI standards or how the signal is handled. I do suspect that for 4K, because of the high data rates, that quality cables (£10, but no more) would be required but hey prove me wrong.

In the final analysis if you think it looks better then perhaps even the placebo effect is worth £10, but no more as that would simply be fraud and probably illegal/miss selling!!

Afterthought: Apparently longer cables for USB 3 slows transfer speeds so it does seem that poor quality cables at longer lengths could be a problem for digital date transfer! Optical is different of course.

And EDIT: Good article here which seems to cover most of the issues with cables: https://www.techhive.com/article/3330376/do-i-need-a-4k-hdmi-cable.html

Slaying the Cable Monster: What You Need to Know About HDMI for 2019

TVs have come a long way in the last few years, and HDMI has been evolving to match. Here's what you should know about buying video cables for your TV, and why a cheap cable will provide the same performance as an expensive one.

Other than the possibility of a higher spec cable these are a few of my current conclusions for running Coreelec on my old Beelink Mini MX S905 rev b, 10bit files playing fine.

Coreelec Settings:
Disable noise reduction (may help reduce CPU load but certainly not needed on most TV’s)
Deinterlancing is on but probably not required for most files so not an issue (I think most TV’s will do this anyway).
Limit colour depth is left on 10bit as doesn’t seem to cause issues with the box.
Not using 4-2-2 colour as causes judder and deep colour seems to be lost.

LG LCD TV:
I turned off ‘True Cinema’ (24p) on my oldish LG LCD doesn’t seem to do much and a few things I read suggest it’s actually forcing 24p into 60hz with some kind of pull-down but not sure about that. TruMotion is off as it’s good on some stuff but really distracting on other content.

So I still notice micro-judder from HEVC but true frame-drops seem to be rare although can’t be sure. Isn’t there a stats overlay that show video info built into Kodi? Not planning on spending hours waiting for frame-drops but they are seen within seconds on action scenes anyway.

So as said I may try a higher spec cable, certainly not more than £10, and then settle with the way things are. Sometimes the artefacts from over compression just have to be accepted.

EDIT: Turned noise reduction back on as it doesn’t seem to make any difference. More importantly turned ‘Real Cinema’ back on (LG 24p mode) as the constant micro judder seems to have been caused by having it off! Normally the judder from 23.976fps is every minute or so but what I was experiencing was a constant micro judder which I thought was poor encoding as it’s subtle. Still not sure it’s helping but!!! Yes fricking nightmare when you start looking for improvements as you become more focused on any slight glitch.

Is it encoding, hardware or just all in the mind???

I’ve had a few run ins with judder and suchlike, the thing that helped most of all in my case was turning off any and all post-processing, image enhancing settings on my TV.

My other media player is a Roku Premiere Plus, running Plex. This has all sorts of issues with HDCP handshake. I’m yet to fully resolve this, but the thing that has reduced it the most is changing HDMI cables. I’ve used all sorts, from expensive premium cables to Amazon basics, to a cheap no name one that came with a random accessory that I can’t even remember. Out of all of them, the cheap no-name one has been the most reliable! As far as I’m concerned, in these days of digital signal so long as it passes the signal along to the correct spec, there should be no difference between a cheap cable and an expensive one.

I barely use the Roku these days, as CoreElec/Kodi has outstripped it in terms of functionality and reliability. My setup is similar to Tim_Taylor:

Can’t remember the last time I was watching something and got distracted by frame drops/judder, with the exception of last night - and that was cos the video file was crappy!

Yep any setup is only as good as the weakest link but often it can turn into a hut for a ‘needle-in-a-haystack’. Even with top equipment just one thing can throw the whole experience into disarray.

I think dodgy encoding is like that itch that should just be ignored as often it starts a process that has no end i.e. The Search For Ultimate Video Experience, which of course is a fantasy, err, in high resolution!! LOL

I think a checklist pinned on this forum might be a good idea? No doubt we’ve all gone around in circles trying to get the maximum out of our boxes/equipment which can become very time consuming and frustrating. A list of checks in a specific order to help people set up their equipment to achieve it’s full potential would be useful. What do people think?

Yes, it’s all too easy to let the pursuit of the perfect experience be the enemy of a good enough experience. For example I rarely watch broadcast TV these days, but when I do I usually find that there’s as many issues as there are with the media I watch at home, if not more! So it’s definitely worth tempering your expectations from time to time.

I recently realised, yesterday, a 128GB micro SD card must have been overheating, or something, as I was getting the green lightening flashes on video playback which also affected HD playback. I removed the SD card and all seems fine now but will update if I still get issues.

I’ll probably edit the first post and put a list of all these possible pit falls, cables, cooling, what to turn on or off etc. Of course boxes vary so it will always be a case of trial and error just as Chris said sometimes the cheaper cable works and certain setting may work better depending on hardware.

By the way everything seems very smooth now so pretty happy, fingers crossed!

EDIT: Just going to add this article as it’s very to the point regarding cables, basically there’s high speed and original: https://www.cnet.com/news/4k-hdmi-cables-are-nonsense/