I’m expecting to get the VIM3 I ordered today.

Already posted about this on the test builds thread but as there were no responses, I’m trying on a separate post.

Are the nightlies mature enough by now to be my CE install on it? I don’t have any grandiose uses other than playing shared files from storage. I think only the nightlies have fan control on them, and I did get one of those despite several comments on how it isn’t needed and makes a noise without fan control. They had some promotion that gives you a discount if you reach a certain size order, so I added it to reach that goal.

The Nightly image to use is the generic NG one? CoreELEC-Amlogic-ng.arm-9.2-nightly_20200103-Generic.img.gz

There are several images that are designed to run from a SD Card or Thumbdrive (U-Disk) and are compatible with VIMs. For example: Armbian with Debian / Ubuntu AltLinux ArchLinux CoreELEC LibreELEC M


I guess I should follow that and then use ceemc?

Yeah, the nightlies are mature enough to be used daily.

The chosen img is correct and the thread How to install CoreELEC gives more information if you are unsure about the installation process.

How to use the Team CoreELEC ceemmc tool gives information about the CEeMMC installation process.

PS: VIM3 is one of the easiest devices to recover if anything goes wrong, so don’t be afraid of trying and failing. It’s part of the learning process…

Thank you for your encouraging words!

I tried Kodi on Android for a few minutes but it wasn’t very convincing, so chucked it away and installed CE over Android. Restored my settings from backup, all went well.

I finally have 4K HDR/SDR playback again, after the disappointing encounter with N2.

The one thing that doesn’t seem to work properly so far, is wake up from CEC.
I’ll post the question on another thread.

The one thing that doesn’t seem to work properly so far, is wake up from CEC.

You’ve beat me to it

I was just going to ask about this feature as I had some time to search around now.

Do I have to do it from SSH? I believe I saw it’s available to be installed (?) directly from the CE part on Kodi.

It is supported in nightly images from CE settings, hardware section.

Yes, so I thought. It was a breeze to run from hardware and appears to be working now.
Thanks!

Nothing against SSH, but perhaps you’d want to add a note on the guide that such an option exists now.

I turned on the tv again now (2 hours later) and vim didn’t wake up this time. Had to use the power button.
Then turned off the tv and then on again 5mins later and it did. SSH also shows “Update of BL301.bin on eMMC is not needed”.
Will see in the next days if this was an isolated case or not.

Each TV brand does handle CEC different. Like on my LG I have to select the HDMI port in device list to wake up the CE device. Other brands wake up the clients immediately after power on…

I have an LG B6. HDMI2 is the ARC port on it, which is connected to the ARC HDMI port on a Marantz AVR. vim is plugged into the AVR. It worked most of the time with the N2.

Better plug the CE device directly to the TV. ARC will still work. I have the same, HDMI 1 AVR with ARC, HDMI 3 CE box.
And the software is complete.the same on vim3 and N2 if you where running the bl301 injection.

Audio from a standard TV ARC to receiver is somewhat limited, unless you have eARC: 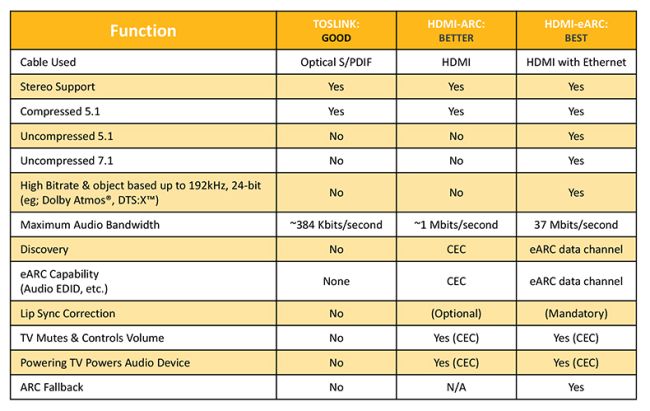 I currently only have basic stereo audio setup, so it’s not a big issue. I am considering an upgrade at some point though.

On the N2 I didn’t inject anything. It somehow just worked…

What about Hibernate instead of Suspend? I can see the vim power light stays on when I turn off the TV, so not sure if that mode is even working.
I could maybe assign the power key (or some key) on my IR remote to wake it up. It’s currently set to open the Kodi shutdown options menu, as too many times I ended up shutting everything down with it

I’ll do some more reading tomorrow.

Thanks.
I thought to have dual boot but it’s too much effort to update Android when both are on eMMC.
I noticed some video playback issue that doesn’t seem specific to VIM3 as I had it on N2 as well. I think it’s hardware acceleraton related.
I posted it on the Kodi thread as I wasn’t sure where to post it.

I thought to have dual boot but it’s too much effort to update Android when both are on eMMC.

That’s because you’ve not discovered Krescue

Nothing is easier to flash Khadas VIM Roms and CoreELEC images.

I have heard of Krescue, but haven’t tried it. I saw you have been pretty busy reflashing your vim3l the last days to try out the new custom android.
While this might be easy, I’m mostly too lazy to bother with maintaining updated systems considering I don’t really have much use for Android. If it was down to just updating through the interface like I do for CE, I would maybe use the dual boot just for the hell of it:)