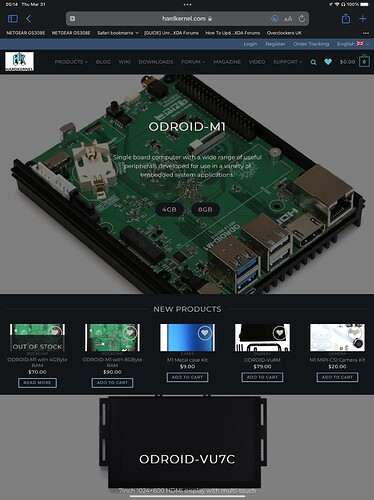 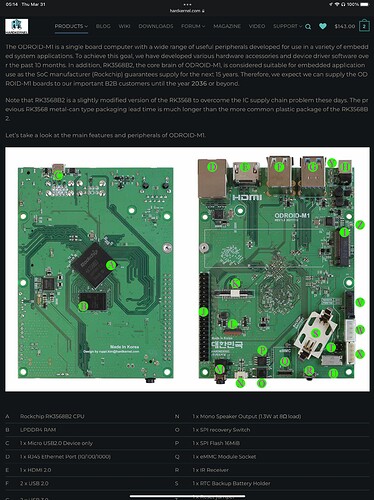 If they were gonna release a new board it should have been based on the RK3588 instead. That would’ve been one hell of an upgrade over the N2+.

should have been based on the RK3588

With the price increased.

CoreELEC is a ‘Just enough OS’ Linux distribution based on Kodi1 technology for popular Amlogic hardware.

According to an article on CNXSoft, ‘Hardkernel says the CPU & GPU performance is similar to the Amlogic S905X3’

So not exactly a great leap forward at all.

RK3588 is definitely the way forward for RK.

Hopefully the AML S908X is coming soon with the same kind of performance increase the RK3588 is showing from recent new reviews.

So not exactly a great leap forward at all.

Not everything goes forward

The point is this

Rockchip guarantees supply for the RK3568B2 for the next 15 years

which is important if you build some device around the board and sell it for years.

Technology tends to though.

And in 15 years, it will appear on Antiques Roadshow lol

And in 15 years, it will appear on Antiques Roadshow

Are you involved in any such product? Probably not.
I’m still doing upgrades for customers to 10+ year old product. With very, very old linux kernel

This board and its derivatives are not exactly for us hobbyists, of course, they include us hobbyists, but let’s not forget that HK has many other customers.

I think I will have a board soon. The only thing that upsets me is that it is out of CE. Let’s deal with LE a little bit.

On the HK side, I felt a wink for the rk3588, at least they seem to want to make such a board, but let’s wait and see how long the market conditions will allow it.

they said on there forum that there testing prototype boards based on rk3588 and might launch this year,jst wish am s908x would hurry up,this should be a incredible sbc with hopefully nve support this time

I have tech spanning back beyond 10 years but I would not really expect to have support (especially hardware repair) for something that has been surpassed by many generations, where the maintenance and stock of spares would not be reasonable for suppliers and vendors to keep for what will be an ever dwindling need.

So I just don’t personally see the 15 year guarantee as something that end users would see as advantageous, combined with the fact that the power of the technology offers very little to attract people that generally want to see the next generation of product be more powerful than the previous.

But the market will of course dictate it’s success, which I predict will flail once initial type has died down and the next, more powerful new shiny thing appears to sway minds and bank accounts.

I have a 16 gig RockPi5 on preorder from Ameridroid-I’d really rather have something from Odroid based on the RK3588 but I guess we’ll just have to wait and see what happens.

Well I am a Hardkernel Fanboi here as @tobetter can confirm. Yet I don’t think Rockchip is feature complete or even in the league with Amlogic. As crappy the software is sometimes it is still better than anything out there right now. An yeah you can praise mainline and all the money sponsored projects but in the end what matters is the best user experience and at this time it is Amlogic.

Business customers for one do see that as an advantage. People that want something to tinker with or that want to setup a media center or some other project are not the only end users that a company such as Hardkernel sells to. They also sell to companies that want to embed a SBC into their own products(digital signage, automation, etc…) or that want a solid SBC to deploy in their warehouse automation, or that want a SBC to do tasks in their factory related to testing and quality control, so will be buying in quantity, will be investing in the their setup and will see a long term supply commitment as very advantageous.

There are many situations where being able to get more 10 years from now is a much more significant requirement then how fast the device is, since there are many tasks that just don’t change in their compute requirements over time.

There are many long lived CPU/SoC/MCU that where produced for decades. Take a peek at the x86 world for example, Intel was still making 80386 cpu up until ~2007.

I get that there can be some longer term uses but I just don’t see it being that relevant for a company like Rockchip. Intel is a far larger concern. But we shall see.

If I read my tea leaves correctly and see into the crystal ball, are we potentially looking at CE expanding to Rockchip with this particular board being first on the list?

Unlikely. We didn’t even received nor requested developer sample devices. It just doesn’t fit into the current project goal.

Well for Rockchip (and Amlogic as well) a long term available SoC would be marketed towards companies that make OTT set top boxes for cable companies, iptv services that provide hardware, companies making products like googles nest devices or some of amazons similar devices. Where it doesn’t mater if the specs end up getting a little stale 10 years down the road, because they only mean for the device to work with their own service or provide the exact same function for the next 10 years.

As for CE and Rockchip, we will be remaining officially Amlogic only. Since one of the things that allow us to provide best possible experience is keeping limited development resources targeted at one companies SoC.

Thanks for the clarification.