I’m probably missing something simple, but I’ve spent 4 days on this, and hope someone can help. I have a number of Instruction Video series- ex. 56 mkv files in sequence. I don’t want to combine them, and I don’t want a million different entries on the home screen. I simply want a Parent identifier ( ie “Guitar fingerpicking technique” ) that, when I click on it, displays the individual videos, with their titles ( not just the parent title ). I’ve tried 2 ways, and am getting lost.

-First, and preferable, would be to write them to an .iso file … but I seem to keep making them Data DVDs instead of Movie DVDs. For this, is there a particular software you’d suggest?

This should be easy, and maybe I’m just complicating it. Thanks for the help.

The Best thing I can think of would be to put the filles in some accessible place on the box or on your network then generate an M3U8 file that points to your media. The M3U8 is the only file that needs to be in the library folder. When you click on it it should dhow you a list on the titles available.

M3U (MP3 URL or Moving Picture Experts Group Audio Layer 3 Uniform Resource Locator in full) is a computer file format for a multimedia playlist. One common use of the M3U file format is creating a single-entry playlist file pointing to a stream on the Internet. The created file provides easy access to that stream and is often used in downloads from a website, for emailing, and for listening to Internet radio. Although originally designed for audio files, such as MP3, it is commonly used to poi...

I will look into that. Thanks. Seems more obvious now that Kodi is intended for people with serious tech backgrounds. I thought I knew a fair amount, but it’s more complex than I realized. Pressing on, though. Maybe, someone has a simpler solution.

If I am reading things correctly, this would seem to be something that should be very simple to do but to verift this, can you confirm that this is broadly what you want.

On the first screenshot I have created a folder on one of my shared data resources and then populated with videos. Once you navigate to the parent folder you only have to click on it and you are presented with all the videos. 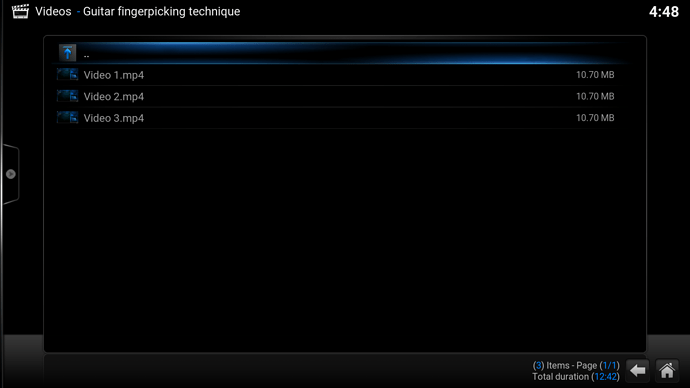 As far as Kodi being something intended for people with serious tech backgrounds, if you are new to Kodi I can empathise with your viewpoint as when I first used it many years ago when it was called XBMC, I really didn’t like it (and I had 25 years in the tech world at that point) and dismissed it.

But I came back and persevered for a little while and now I would not choose anything else,

It is less of a potential tech problem for new users and more one of language and structure.

Some things do not initially seem logical and in the right place, with better and more logical descriptions.

But if you give it a go, thinking about it in the same way as driving a car, it just takes a little practice to get the hands of things and to explore to see what options there are and what effects they have on usage,

Thanks for the info. Yes, that’s pretty much what I’m looking for. I’m thinking the best approach is to import them as a TV show, and rename the files in the format- S1-E1… , and have .nfo files for each mkv file, being part of a series ( still working on the details. )

Part of my frustration was my misunderstanding that it was more plug and play. I think that most things are doable, I just didn’t anticipate the steep learning curve. One good thing about the pandemic, is I’ve got time, still my wife keeps saying “Are you still working on that thing in the basement?” Have a suspicion we’ll be having that conversation for a while. Learning something new every day.

If you just stick them in a folder browse to the folder highlight it and add it to favourites. you will just have one entry in the favourites section called “Guitar fingerpicking technique”

Thank you all so much. I renamed the files in the format S01E01-Text, added the tvshow.nfo and nfo files for all 59 “episodes” and it’s working fine. I wonder if there’s an easy script I could use to create the episode nfo files.