Originally, I had the box wired to the TV and audio routed via ARC. Video was fine like this but some ARC did weird things with certain soundtracks.

If I use kore app on the phone to mess about playing different video files, the TV will display correctly.

I can then go back to whatever I was trying to watch originally and it will work ok.

The receiver ‘should’ pass everything through, it looks like it only does when it can be arsed!

I’ve tried messing with the delay setting on resolution change but not had much luck.

A reboot normally fixes things, the box runs 24/7 as I am sharing Freeview across the network with tvheadend and an Xbox one tuner.

Apologies if posted in incorrect section.

Yes, get a HDMI splitter with one input and two outputs, separate for TV and receiver.

Nah there’s an idea…I didn’t realise they were a thing…mind you, I never looked! I’ll look into that
Cheers 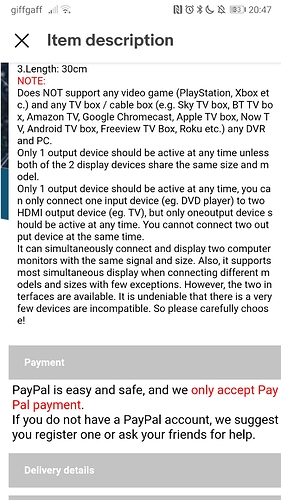 Don’t look at cheap crap, look at something like this