On HardKernel’s Odroid wiki, this page

points to a github repository for an RPi.GPIO library that’s been adapted for the Odroid boards:

Is it possible to build and install this at all within CoreELEC or is it only possible if I’m running under, say, armbian or Ubuntu? I saw mention on the LibreELEC forums of an rpi-tools addon that appeared to be part of the LE addon repository. Is anything like that available in CoreELEC?

I ask since I’d like to then install the Python packages luma.core and luma.lcd for driving a SPI-connected LCD panel.

Hmm… perhaps the Entware route will get me just enough development environment to get things working.

What is Entware and How to Install/Uninstall it?

Install all python3 packages per:
http://www.giuseppeparrello.it/en/net_router_install_python_interpreter.php

UPDATE: Actually, I think opkg install python3 python3-dev python3-pip may be sufficient, rather than everything listed on that site.

Trying python3 welcome.py --interface spi, though, gets an error from PIL:

I’ll give that a try, @vpeter, once I get python3 back to a working state.

I went down the route of uninstalling things to try to get a fresh slate, and now things are such that pip3 won’t work (complains of missing urllib, which seems bad)!

Unfortunately, @vpeter, that doesn’t seem to help. Rather than editing source anywhere, I just gave both of the following a try after invoking /opt/bin/python3:

and, in a separate run:

For both, the import in question that actually fails is from PIL/Image.py itself, in the try/except block below. The exception that is supposed to get caught is indeed ImportError, but I don’t think any of the conditions listed match. This form of import is the “modern” version per the third warning box on this page:

I’m wondering if pillow was built correctly for Entware…

Some progress! Browsing through the list of entware packages

I saw there was a python3-pillow. So,

and the demo.py invocation now gets me:

Seems like I might almost be there! Soon as I figure out how to get the GPIO access it needs. (I’m already root, so it must be some woe besides permissions.)

That last woe was due to the actual Raspberry Pi version of RPi.GPIO getting installed in one of the earlier steps. Getting that thoroughly deleted and then re-building and re-installing the RPi.GPIO-Odroid code results in this, a working OLED display connected to the C4 running CoreELEC: 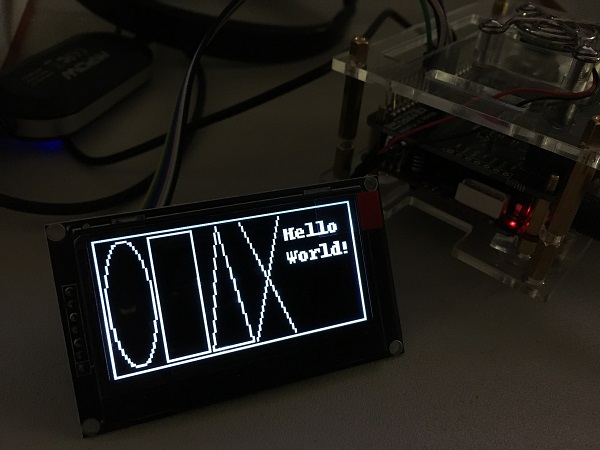 Many thanks to @anon88919003 and the CE developers for making entware available under CoreELEC! I really didn’t want to give up on the platform-specific Kodi improvements the CE team makes, but I want to make progress with this display / front-panel project as well. I was prepared to give armbian or Odroid’s build of Ubuntu a try, but wasn’t looking forward to the state of Kodi in those OSes.

I did get this display working last night in Ubuntu on the C4, but I’m really exited to still be able to use CoreELEC. Now I just need to migrate the LCD panel over from the RPi.