What device tree file are you using?

Wired was solid for me when I tested but no bluetooth

I am using sm1_s905x3_4g_1gbit.dtb. I have not tried others, and not sure doing so would be wise. I turned on bluetooth, but nothing showed up, so probably does not work. For me, not an issue, like Gbit LAN is.

Might seem obvious but I would try a different ethernet cable to see if it makes a difference.

Here is what i discovered and which is maybe not already written here:
a) With ceemmc -x you can install the nightly ng build to the internal storage and keep Android and CE in dual boot just in case you didn’t know yet.
b) Another finding is that with WiFi enabled i cannot get real sound but just some noises so i use LAN for now. I don’t know why WiFi has influence on the sound and in Android this is no problem.
c) The analogue audio output seems not to work yet with CE but with Android.

Now one minor issue remains:
I installed the vfd.conf but i only have the clock. How do you activate the indicators ?
Is there a more complete vfd.conf somewhere ?
Why is there no boot message when you turn on the device then ?

Update: Now i get wrong sound also with LAN. It is like slow motion sound.

a) With ceemmc -x you can install the nightly ng build to the internal storage and keep Android and CE in dual boot just in case you didn’t know yet.

Any guide? What are the advantages vs installing in SD?

Do you have a pic of where you got the 5v from? I was going to splice a usb cable to my fan and then just plug in the cable but internal wiring might be nicer 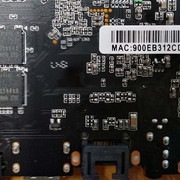 Just login with ssh and execute the command.
The advantages are that you have one SD card free for other devices and it is probably faster from EMMC than from SD card.

Tried and new cable and static IP. Same result. Will send this box back - does not seem right.

How much free storage were you left with in CE after doing dual boot? It says in the guide about 5GB of internal is lost with dual boot, so I think I might be pushing it a bit close for my large library on my 32GB box.

I still have more than 50GB free disk space in storage and good that i still have Android because currently with CE i have sound problems and so I can use Android.
But i don’t need the storage for videos because they are on a file server and the X96 Air should just index and play them and for the index it is more than enough.

Heh, my thumbnails folder varies from 2 to 8 gigs on different devices.
All indexing database is on MariaDB/RocksDB and source content is on mounted NFS NAS share, apart from streaming services, of course.

32 gigs should be enough both for CE, and Android (some games also), if you do not store multimedia content on the box.

Now one minor issue remains:
I installed the vfd.conf but i only have the clock. How do you activate the indicators ?
Is there a more complete vfd.conf somewhere ?

What you want to add?there some limits.
did you install OpenVFD addon?

Why is there no boot message when you turn on the device then ?

Can the Temperature be displayed on the vfd?

You can choose what to display with OpenVFD Service.

Let me know if you get it

Might seem obvious but I would try a different ethernet cable to see if it makes a difference.

Well, I think it might have been the cable. Thank you.

Hi. I have x96 air P3 with the latest version of coreelec. I have installed the vfd file, along with the openvfd addon and the display does not work for me. The vfd file that I used is x96 max. Anyone have any problems with the display last nightly? Does it work for someone with the p3 version of x96? What vfd file have you used?

Did you try the one from the OP?

VFD
read here how to.
You will need this file (Download raw file)

My P2 worked with this one, with minor tweaks on the OpenVFD addon settings…