On the verge of buying this (H96 Max) but would like to know if anybody has managed to run CE from internal while keeping Android? Not sure if dual install is supported via an SSH command as it seems a grey area. Would just be nice to keep Android for airplay/mirracast etc as this isn’t supported in Kodi.

I would consider a similar box with two USB3 ports so haven’t committed but the dual boot is desirable. 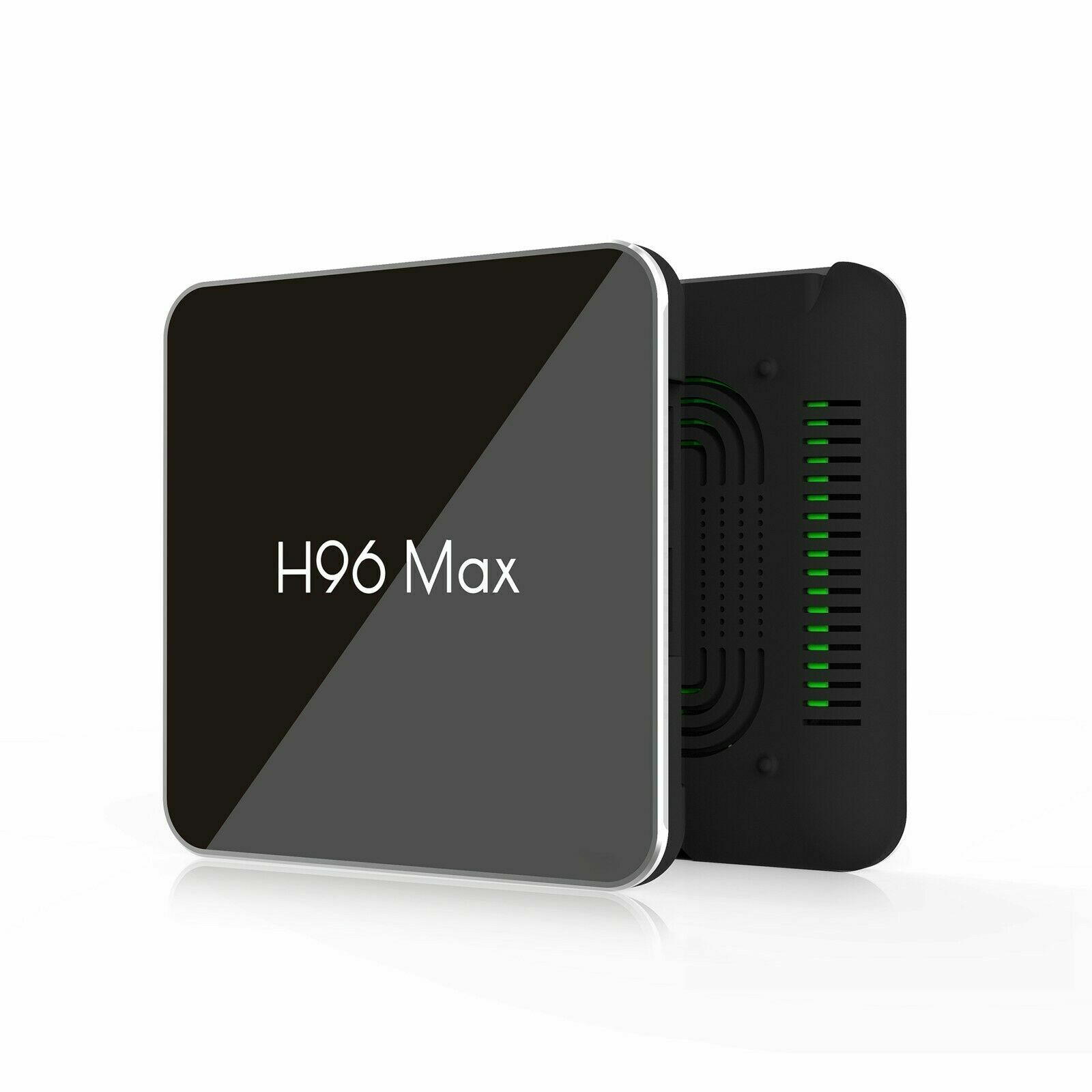 Yes I read that but does that mean the ‘ceemmc tool’ is incorporated in all builds and accessible via SSH? The point I hadn’t picked up on before was that certain options only appear depending on the device capabilities. I’ve installed to internal on two S905x boxes but didn’t get the option to install as dual boot, perhaps it depends on storage space?

So it would still be good to know if the H96 Max has the option to run dual boot from internal? Anybody?

Is the availability of certain options dependant on the devices available free storage? Just curious as the internal install process on my Beelink Mini MX and A95X didn’t give me the option of dual boot (both 16Gb Storage). I did use the ‘installtointernal’ command but perhaps there’s another command that gives more options?

installtointernal is completely unrelated to ceemmc. It’s only available on Amlogic builds (non-ng), and although it’s there due to user demand, it’s not officially supported by us.

What’s non-ng? I thought all the builds here are for Amlogic? Yes I got that it unsupported so may not go down that road. How is ceemmc accessed?

I didn’t know that, so the box I’m looking at doesn’t even have the option of dual boot from internal?
H96 Max S905X2

Reading a few threads here it does seem iffy (ceemmc) and I don’t enjoy unbricking boxes especially when it involves shorting pins out etc!!! I’ll probably give up on the idea and just stick with my current boxes. Unless people tell me the H96 Max is in a different league completely.

I didn’t know that

OK
What do You want to do ?
Asking hundred of questions ?
The brand H96 Max is just a brand.
Nobody knows what kind of cheap chinese crap is inside.
Why do You want to buy a S905X2 box ?
Because it´s cheap ?
Sorry, I don´t understand

Is that an opinion or a fact? Obviously there are many here that will push certain boxes and snub others because they have vested interests. So what’s your angle Tim?

I just thought these newer boxes were faster and more capable with better decoding etc. I also stated my reason for wanting the dual boot option above:

Would just be nice to keep Android for airplay/mirracast etc as this isn’t supported in Kodi.

Yes I could go the SBC route but that seems more technical and I want things simple, who doesn’t?

I want things simple, who doesn’t?

You want it simple ?
But You want dual boot from internal.
That´s not KISS(keep it small and simple)
BTW:
I´m no seller of any hardware and I never pushed any box by brand.
I only told You it´s a bad choice to buy a cheap S905X2 box - better buy a well known CE working box. There are a few ‘unbrickable’ boxes supporting dual boot without thermal issues.
But it´s Your choice, not mine

I only told You it´s a bad choice to buy a cheap S905X2 box - better buy a well known CE working box. There are a few ‘unbrickable’ boxes supporting dual boot without thermal issues.
But it´s Your choice, not mine

I’m not committed to buying any specific box so feel free to make recommendations especially if they can run dual boot from internal. You might say read the forum but if you know what would fulfil my needs why not just say and save us both time?

By the way are you suggesting that these ‘ng’ boxes are not really and better than the old generation?

BTW: I love my Nexbox A95 as it’s cool fast and fulfils all my needs. If you tell me I could have run the ceemmc tool on it I’ll be gutted! But hey great little box so maybe an upgrade is pointless. Hey we all like striving for the best but perhaps I already have it, relatively speaking of course?

OK that’s great info, sorry for being so dim! Now I’m considering the Magicsee N5 Max but wondering if it’s worth having 64GB ROM or 32GB? If I’m going for a dual install then perhaps I should go for 64GB?

Thanks you’ve been helpful now I’ll go and research and perhaps, maybe, buy a new toy!! Err hate the clock but a bit of tape will sort that out. 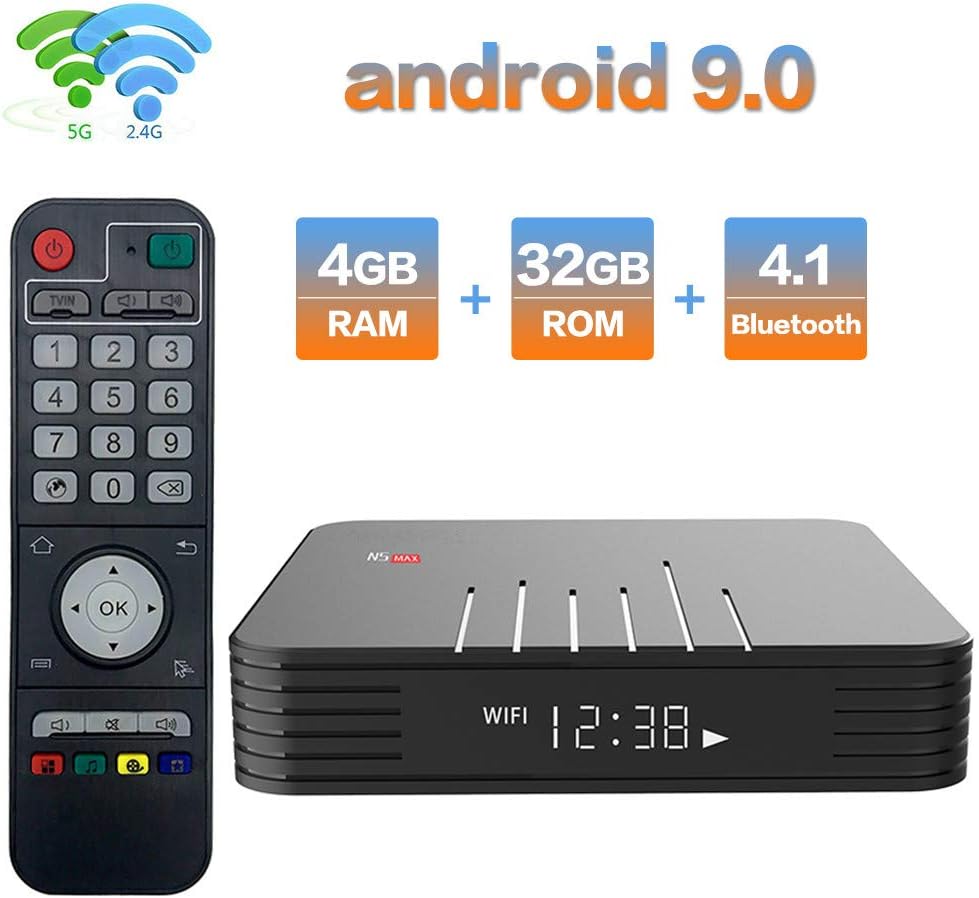 This box only has 100Mbit/s ethernet.

Instead of posting each of the several thousand china boxes, it seems easier to me, if you just write down your requirements for such a device (Wi-Fi / LAN speed / HDR / no clock / proper cooling / low price / …), and maybe some of our users can recommend something that fits your expectations.

You can also take a look into this post in the Kodi forums:
https://forum.kodi.tv/showthread.php?tid=252916

Thanks will take a look.

This is fake box. No Magicsee, all that is writen on the label is “N5 Max”. I got scamed too with one of those. 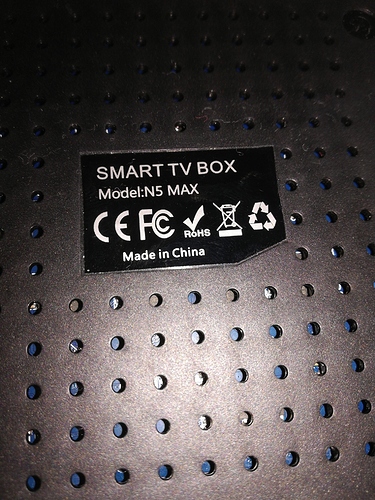 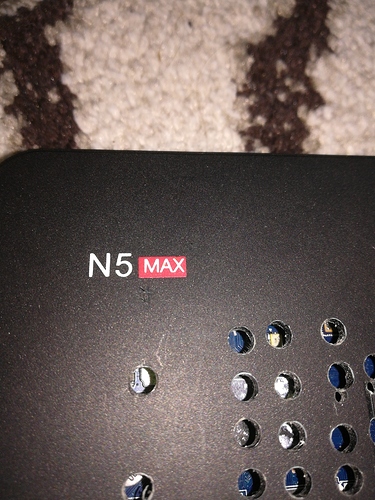 A friend of mine is in the same position right now and is in the market for a new box for the same price point as the H96 Max S905X2.

So my starting point for consideration, taking into consideration general spec and price point is that I would immediately say forget the S905X2 and focus on S905X3 as price differential is very small and so best to go with the later SOC, which may also have longer term support.

The key differences between S905X2 and X3 boxes is that X3 boxes tend to come with 1 USB 3.0 port as standard, the X3 is faster and is also more power efficient.

But first a little bad news. Just about every cheap Android TV box (and rather too many expensive ones too) comes with crappy firmware, most of which may see an update or two that will fix little, leaving it in the hands of independent devs to produce custom firmwares to make them more practically usable and stable. Which boxes get such support can often depend on what is popular, so if Android is a really key priority for stability, performance and reliability, do some research on sites such as Freaktab, xdadevelopers and others.

For the purposes of media usage, then of course, CoreELEC is so much better than Android and has way better support by a country mile.

Most boxes will come with WiFi and Bluetooth and so I would say that if WiFi is important then go for a box with dual band WiFi and even better, supporting the AC standard.

Bluetooth functionality is fairly standard but as each manufacturer will use differing WiFi/Bluetoooth chipsets, do some research on here to make sure that the tyoe you may choose is supported by CE. Pretty much most WiWi are but Bluetooth is not quite as universal, although it is possible and cheap to add a generic USB Bluetooth dongle to provide support, albeit at the expense of using a USB port.

The cheaper the box, the more possibility of having 100Mbit Ethernet and whilst adequate for some needs, I would personally recommend going for something with 1000Mbit (Gigabit) as not only will it be faster for streaming but also handles higher bitrate videos without annoying buffering, especially via the internet (noting that slow internet connection means potentially slow streaming and buffering anyway).Some boxes with the same name will have differing specs in terms of Ethernet (and sometimes WiFi) dependant upon specs, so watch out for that as it can make a cheap purchase suddenly seem like a bad one.

Most X3’s will come with 1 USB 2.0 and 1 USB 3.0 and a select few will come with an extra USB 2.0, which might be handy if you need more ports for perhaps TV tuners and other things.

Then there is of course the user experience and reviews, which it always pays to research on forums and places like Youtube. The time will be worth spending to ensure that you get what you want.

There are some fake boxes out there that look like the originals but have inferior and even different hardware under the hood. Fleabay is a particular place to find them, so always purchase with insurance just in case.

RAM and Storage will be dependent upon what you yourself need but with USB ports, micros SD card slot, you do get immediate storage expansion options. The more RAM the better but 2Gb should be the minimum to start with and perfectly fine for CE use but Android will use more RAM in general and if gaming is your thing, I’d say go for 4Gb.

Reviews are good and user experience seems quite positive.

But the proviso is not one that is entirely uncommon to TV boxes, cooling/heat dissipation.

The manufacturers of the X96 Air failed to provide any vents for heat dissipation,which does mean a hotter box, although only seems to be an issue under high load/stress.

So I shall be taking the case apart and drilling some holes/vents into the plastic to reduce overheating, which may not be something that you want to do.

If your budget were to stretch further then you might even consider an SBC (single board computer) such as the Odroid C4, although that is an entirely different discussion.

As far as dual boot from eMMC is concerned, which has pretty much been covered by others, you did the right thing to ask if a particular box was capable and I don’t know if the X96 Air is, although there are a couple of discussion thread about it on here, so you may well find the answer there.

Good luck OP and be prepared for some ups and downs along the way but it’s all worth it for the most part.

Top post, thank you for that certainly lots of food for thought.