Since I’m a member of this community from it’s very beginning, I remember the time when CoreElec Home site was first introduced (at https://coreelec.org) there existed a link to a total number of reported/submitted various CE versions installations.
Since that link does not exist now for some (long) time I would like to know how big has the community grown in the meantime; in other words, on how many devices is CE now installed, if that’s not a privileged info ?

Approximal 21577 devices who didn’t switch off this statistic collection 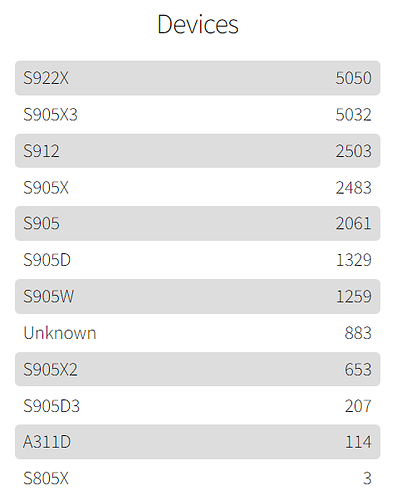 is that all?I thought it would alot more than that

We are exclusive club

Just out of curiosity, do you know how many LibreElec and Kodi users there are, to get more context for the CE user number?

You will have to ask there. From my information when I was with LibreELEC in late 2016 there were about 100K Raspberry Pi users alone iirc.
According to Sam (information from maybe 2018?) he had over 1M Vero AML users.
I don’t know how accurate it is cause it’s based on hearsay and my fading memory.
Our stat data is transparent and according to our privacy policy you can opt out of it which is not possible in neither OSMC nor LibreELEC iirc.

I never really cared about stats to be honest. For me it doesn’t matter if I have 30 users or 30K. When I was with LibreELEC doing community builds I had 39 Wetek Play2 users iirc and I interacted gladly with everyone of them.

Also we are non commercial. We don’t take endorsements or financial deals with vendors or beg users for donations. The most costs we have are running the forum and it’s kept to a minimum and covered by some ads. Ads are turned of regularly when the yearly costs are covered.

What I am trying to say is that besides from an ego boost (soo many users, we are great) we don’t have any benefits from a larger user base.

According to Sam (information from maybe 2018?) he had over 1M Vero AML users.

Hmm…, I have a problem believing this…

I don’t know but that’s what he said iirc.

See if that makes sense from the public records of his profits.

I think a lot of people turn statistics off. I know I am one of them.

What is the reason or advantage of turning it off? It’s only used for statistics…

I can assure everyone that it’s only for statistics. We’re not in the business of selling information, we’re not even a business. If there was a move in the direction of massively turning statistics off we are far of knowing the size of our user base.
But as Ray said, it’s not that important to us.

I have it turned off myself. It’s my choice and I respect everyone who turns it off as well. I just find stat collecting ridiculous in general. I don’t have privacy concerns because I have access to our server and know how it’s implemented. Also I drafted the privacy policy about the stat collection so it’s all out there.

I have it turned off myself

See if that makes sense from the public records of his profits.

There is one more thing I noticed from those public records; it says there that he was born on February 1994. I remember using a small Windows program that he wrote in February 2012 called “Raspbmc Installer for Windows”.
So, he was only 18 years old when he made that program which I still sometimes use since it has a useful rutine to allow device to be restored to formattable state; very useful for me when an uSD card has partitions not readable on a Win machine…