I changed my Kodi Device from Raspberry Pi to MeCool KIII Pro in order to use it as a TV receiver and media player.
The media player is running perfect, but i am not able to watch TV or even scanning channels.
This is what i did:
I downloaded CoreELEC-S912.arm-8.95.7-S912.img.gz and put it on a sd card 32GB using etcher (Rufus didn’t work for me)
Then I copied the file gxm_q200_k3_pro to the root folder of the card. I deleted the existing dtb.img and renamed the file gxm_q200_k3_pro to dtb.img.
I put the sd card into the KIII Pro an pressed the reset button while plugging it in.
CoreELEC started and is working fine. I can acces my files via NFS and even playback 4k files.
Now i wanted to try television (DVB-S2 and DVB-T2). When using android on the device this is working without problems.
I installed THHeadend Server 4.2 and PVR Client via Addon Tab in Kodi.
I can see TVHeadend Server is installed but if i click on it nothing is happening. I don’t know where to scan for channels.
Can anybody help me? I am stuck.

TVHeadend has a web interface which you access from a remote computer. Its fully documented at the TVheadend site but not anywhere here. It uses a wizard to setup and scan on first login which makes its very staightforward to setup if it detects you tuner card.
You may have to install the dvb modules addon to get TVH to recognise you tuners and then you will have to find the correct tuner through the module selector addon. It should work well with these boxes since they have been well supported for over a year at this stage.

Thank you, i moved forward but i am stuck again.
TVHeadend does not find my tuner card. I changed the driver from CoreELEC to DVB Drivers from the latest kernel but still no success.
Do you have an idea how to solve this? 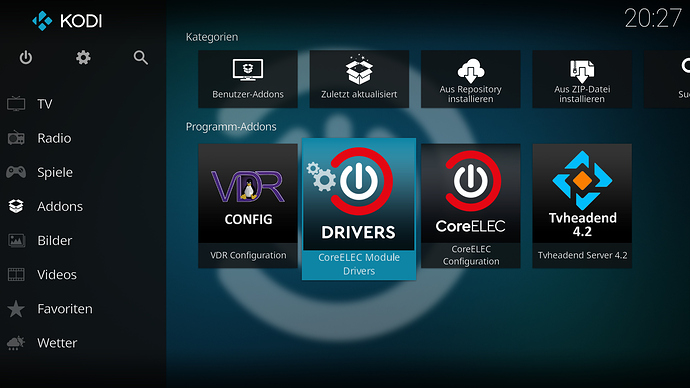 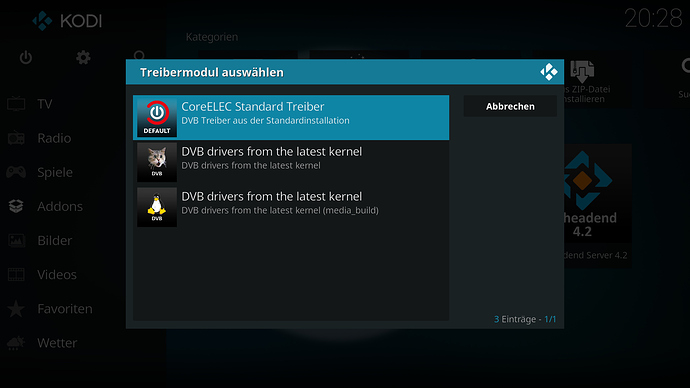 For whatever reason my menu seems a bit different and I have an option called TBS / CrazyCat with the Cat logo like your second option. (Maybe because I haven’t done a fresh install in a while)

The adapter is at least visible in TVH with that option. However last time I tried it, there was some signaling issue and I move the antenna cable over to my external adapter instead so I’m not sure if its working as intended.

MarcWilmots sent logs from your box.
Reboot your box, select Settings->CoreELEC->System->Submit Log->Upload latest Kodi log and…
In Services enable Samba and password.
In your PC open samba link \\coreelec\Logfiles in explorer and send me log-2019-01-xxxx.zip.

I tried the third DVB Driver and now the tuners appeared

Television is working.
Thank you all

Hi, Marc
I tried to do what you do, but I only get one channel working, a shopping channel. I’m in Berlin, I selected “Berlin” as the location during setup. I have the Kii Pro 2g/16g from Mecool. Any suggestions? (As usual, it seems as soon as I make a post, I figure it out a minute later)