X265 blurred line at the bottom

I see one problem when decoding a lot of x265 1080p content, in the last few lines at the bottom are copies of each other forming a blurred line, i think is when the content has a height which is not a multiple of 8. .
I’d like to know if anyone else has seen it and if you know how to fix it, thank you. 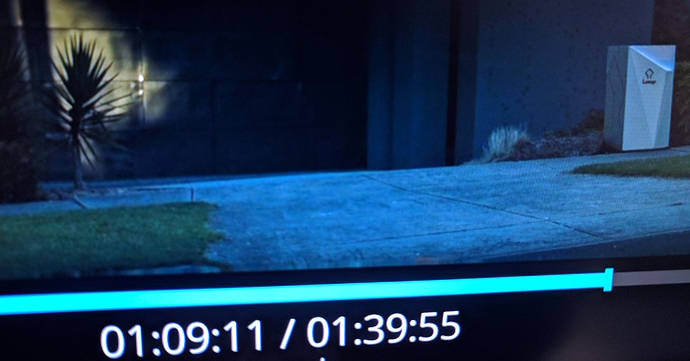 The software I wrote crops to either 8 of 16 bits depending on whether I am using hardware encoding. On some players you get a pink or green border if its not a multiple of 8 or 16

In other words, it’s an issue with your content in conjunction with hardware decoding limitations. This is not a CE issue.

Okay, thank you very much, that blur line doesn’t get very annoying either, as long as it’s not a horrible green thing.

Hello,
i confirmed i also have this same blue, but not only on x265 content with below devices / software: Plex -> PlexKodiConnect -> CE on Sony TV-KD 65X600E

I’m also curious if there is way to “fix” this but understood it’s not a CE related issue.

I’ve tried cutting the 4 pixels that are left over at the bottom editing the mkv header with the MKVToolnix since it has that option, but it seems that Kodi (and many other players) doesn’t read that information but you can try with your devices.

I have the same blurred line under coreelec but under kodi android there is no blurred line. So this is a coreelec problem? On older verison of coreelec, the line was not present on my box. Beelink GT1 Ultimate.

The line has always been there in CoreELEC if the vertical lines in the content is not dividable by 8.

I would like to take up the topic again. I now also have the problem that I have a green line with certain content at the bottom of the picture or at the 16: 9 bar. But only in Coreelec @ 9.2.7 @ S905X
If I call the content via Kodi Android or Win 10 VLC etc. the content runs cleanly.
Isn’t there a way to fix this phenomenon?
That would be great.

Since watching more x265 files I have also noticed this on my S912 box. Switching off hardware acceleration appears to solve the issue but I observe high CPU load on playback, not sure if this would cause an issue long term? Are there any config changes I could make instead of disabling hardware acceleration? (I note that CE19 is not available for S912 devices) Cheers

Thanks for the quick reply, can you confirm if this is no longer an issue on newer boxes running CE 19?

I never had this issue.
My daily driver is a N2, best SbC You can buy

Cheers, I’ll look into an upgrade