X96 max plus, Problem with 4K and Spliter

I induced SD Coreelec 19.5. Kodi started. With a direct connection of the TV box, I had a problem with 4K movies, setting the Color option at 4.2.2 helped. However, the image with 4K60p files from the GoPro 8 camera still disappears. I don’t know what the problem is.
Another problem I have to connect via HDMI Spliter to make a sound to the old Denon AVR1611. Spliter with PC and Stock Android worked properly, while with Coreelec TV detects the image only in 1080p instead of 4K. In Spliter, the HDMI OUT 1 port transfers a 1: 1 image, while HDMI OUT 2 scales to 1080p to receive full audio support for AVR. Anyone have any proven settings on how to remedy this problem?

For 4k50/60hz use 4:2:0. But it will auto switch to this color sampling. Maybe limit colour depth to 8 or 10bits and leave the other option at auto?

What format is the GoPro 8 recording in? MediaInfo in Windows/Mac/Linux will give you detailed information about the file format. If the file is recorded in a format that the AMLogic SoC in your box can’t play (say with h.264 or h.265 with 4:2:2 chroma subsampling, or ProRes or DNxHD, instead of h.264 or h.265 4:2:0) the file won’t play.

If the file is playing OK when you set Kodi to output 1080p then the issue is with your connection.

4:2:2 2160p50/60 are higher bandwidth and will expose electrically sub-standard HDMI cables (that’s the most common cause of a blank screen I’ve had with 2160p50/60 content) - if you see your TV put up an error message like Unsupported Format - that’s often a sign of either connecting to an HDMI input that doesn’t support the format OR the cable not passing the video signal intact.

Don’t pay stupid money for HDMI cables but it is worth making sure the cables you buy are ‘HDMI Premium’ certified with the HDMI hologram that guarantees full bandwidth. Amazon had some for £10 or so in the UK.

Also - take the HDMI splitter/downscaler out of the signal path when you are checking all this. Get a direct connection between your Kodi box and your TV working properly first - then introduce the splitter. It may be the splitter won’t downscale 4:2:2 or 4:2:0 and only likes one of the two ?

For splitters with internal 1080p downscaling for AVRs you are likely to have to make sure that the EDID sent to the Kodi box is either forcing 4K 5.1 or using the TV’s EDID in passthrough. However the latter may mean that Dolby True HD and DTS HD are flagged as unsupported. (However I think Kodi usually ignores this?)

I am sending a screen from the media info Gopro Mux to MKV and 4K UHD Remux. TV Sony XE9005. The fact has limited inputs HDMI 1 and 4. Currently connected I have HDMI 1 TV SAT. HDMI2 - PS5 console, HDMI3 - ARC for the Denon AVR1611 receiver. HMDI 4 - Box X96MAX+. On Sony TV, an improving image option for HDMI inputs. For 4 years I have been on the original X96 software in Kodi and I have no problems displaying images. Reads all GOPRO files in all resolutions and FPS, just as different files with MKV movies.
However, there is still problems on the uploaded Coreelec. As I set 4.2.2 I can watch MKV 4K HDR movies but I can’t watch with GoPro. As activated by 4.2.0, movies from GOPRO work, while MKV 4K HDR movies are not. 8-10bit combinations change nothing. I do tests first on a direct connection. I have HDMI 2.0 HDMI cables on which HDR works easily (both on PS5 and X96 Stock Room).

Regarding Spliter, Spliter on Stock also works without any problems.

Regarding HD tins, Stock Room has options for transferring DD, DD+, DTS, DTS HD, TrueHD. However, Kodi on Stock Rom is blocked for DTS HD and TrueHD. On Coreelec
, DTS HD and TrueHD will work great. 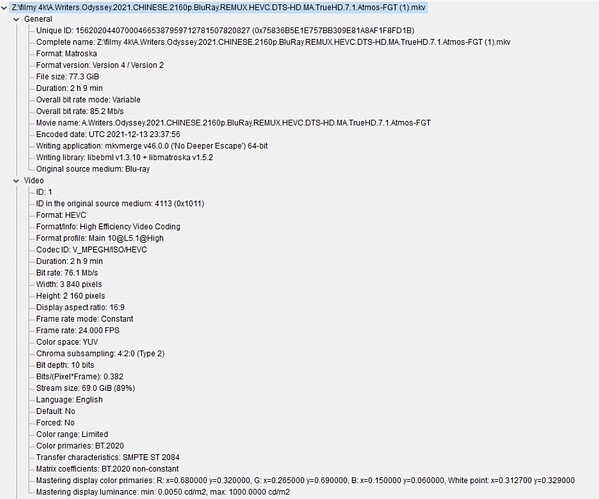 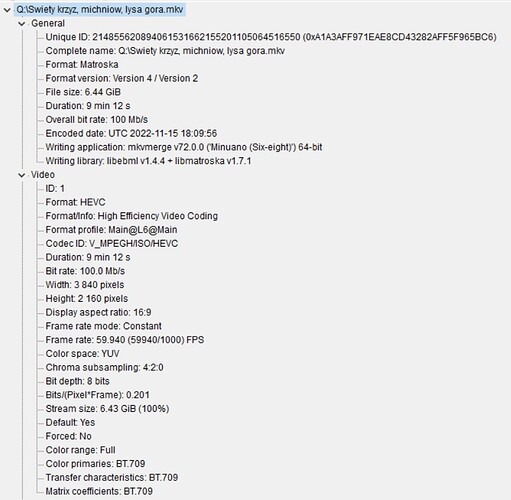 OK - you have the XE9005 series. I had that model in 50" but Sony replaced mine free-of-charge under warranty with the XF9005 because of the XE9005’s model range (across all sizes) inherent frame pair drop/repeat bug that I documented and diagnosed a couple of years ago

(Lots of avforums people followed my lead - as Sony couldn’t fix it back then). I proved the fault by recording my TV in slow motion with timecode burned in to the video that was being played and you could see the timecode jump and repeat… (Back then it went away only in Game and one other viewing Mode or if you did something with Bluetooth that caused all sorts of issues with audio delay if you used an AVR)

The GoPro file is a high bitrate HEVC/h.265 4:2:0 codec - but should be fine for playback - and as it plays back OK in Android on your box then that’s not the issue.

If you try temporarily using HDMI 2 or 3 with your X96 and 4:2:2 output you can see if that tells you anything.

As for why it plays on Android and not CoreElec/Kodi - well they are two different OSs with different drivers etc. so there will be differences - but it should demonstrate that the hardware is capable. You see this in reverse when you run Android (which you call ‘Stock ROM’ I think) on the box and don’t get True HD and DTS HD - presumably because the Android OS and Android Kodi don’t support them - but CoreElec does.

I set 4.2.0 but still problems with the image. I connected to the tests to the HDMI 2 socket where I use PS5. Here, Corele works well, I have everything on Automatic, starts all files. I have HDMI 2 and 3 outputs on Enhaced. I will stay with this setting, I disconnected the receiver from the HDMI ARC3 connector and connected X96 there. I connected the sound to the receiver with an optical cable. ARC also sent TV only DTS and DD+.

I still have to try another spliter. Now on these connectors in Spliter Auto Mode sends 4K without HDR to HDMI to TV and 1080p on the receiver. In the mix mode it starts with 4K HDR on both connectors. On HDMI 4 on TV Spliter passed 4K HDR to TV and 1080p to the receiver on the original Android.

How exactly did you test your XE9005 to catch the defect? I would check my TV.

I saw it within about 10 minutes of switching the TV on. I always disable all the digital processing like Motion Flow, Noise Reduction etc. as it is junk and does nothing to improve picture quality… With all the processing disabled the artefact is visible on any native 50Hz content (sport, entertainment etc. TV shows). You don’t see it on 25Hz native stuff like drama, films and most documentaries (even if it is broadcast at 50Hz).

You see a brief judder where a pair of frames is repeated - usually after a shot change. It’s really obvious on news channels with tickers along the bottom of the screen. (To keep in sync-isn - they also drop pairs of frames around shot changes. It’s as though a processor can’t keep up and is using shot changes to cope. Sometimes you see the frame drops and repeats NOT on shot changes - then it’s REALLY obvious)

I direct TV for a living so am used to spotting flash frames and other artefacts like 24/25fps freezing etc. so spotted it instantly. I was watching a shows I directed and saw the judder on shot changes that I knew weren’t there in the control room…

Switching the TV to Game mode stopped it happening - so I knew it was an issue with the TV. However Game Mode has interesting gamma so isn’t a long term solution.

To prove the fault beyond doubt I created a Blu-ray ISO with 720p50 video in it (to avoid interlace) and this video had 50fps timecode burned in so every frame had a unique number on screen. Filming my TV playing that Blu-ray with my iPhone in 240fps slow motion confirmed the dropped and repeated frames, and it was reasonably consistent (the same content caused it to happen). I was able to do the same with 3 other versions of the same TV (55" and 65") in the shop that I bought my TV - they were very helpful. This confirmed it wasn’t a fault with my TV but with the overall design. I posted in a UK forum and lots of people said they saw the same thing.

I got in touch with Sony who took a while to take me seriously until I contacted a corporate contact I had there. The retailer (John Lewis) I bought the TV from were also very helpful. Sony confirmed the fault eventually and offered me a replacement TV without the fault - which was the newer model. Others at the time were made the same offer if they complained. This was over 3 years ago now though I think.

John Lewis agreed to honour their 5 year warranty on the new TV, so I was happy.

If your X96 running CE works OK via HDMI 2 or 3 but not via HDMI 1 or 4 then it’s a bandwidth issue. Without replacing your receiver I think you’ve got yourself in the best situation. ARC and Toslink are roughly the same in quality terms - the only thing you may lose is the convenience of CEC switching AVR sources.

My TV is out of warranty so I can’t do anything about it. this problem does not concern me. I watch movies with motion plus set to medium + some enhancers. On the PS5 console, I play in Game mode.