after the nice help from @rednas74 and @Compent and some other - politely called “off topic” comments from “well respected” members I went ahead 3 days ago took 23€ and ordered myself a X96 Max Plus with x905x3 with 2GB of ram and 16GB flash.

Guess what, my order arrived already

I’m now wondering if there is any real benefit of installing CoreELEC in the internal flash (overwriting android) or if I should have the same experience running CE from a micro sd card (a2 rated) or a usb stick.

In theory the internal flash could have higher read speeds - but that’s the theory.

And does it actually matter to much where CE is booted from? It should be small enough to load the whole system into ram when booting - does this happen like this or are they permanent readings (and even writings?) from the root file system necessary?

If you have valuable feedback for this thread I’m happy to read your post!

@olo got some insights regarding sd card and usb speeds:

He also wants you to not buy this box:

or at least make a cheese

out of your tv box: 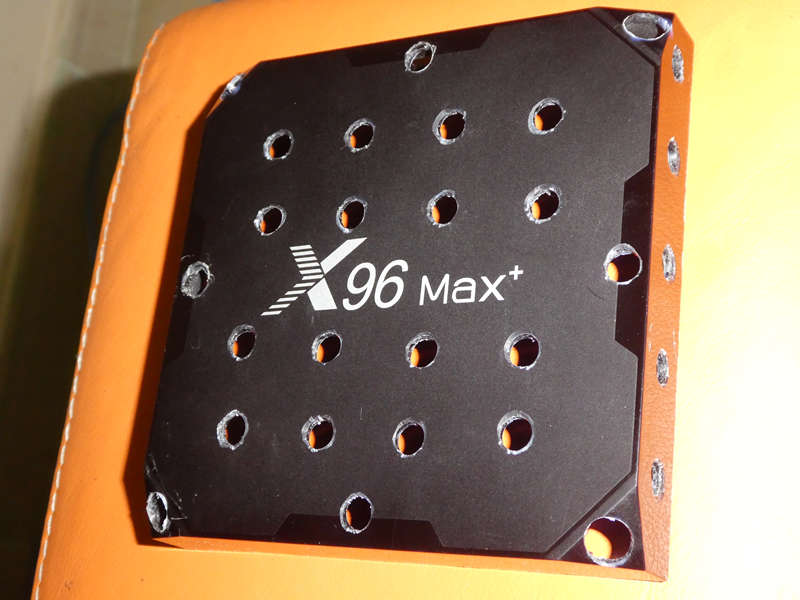 well olo has some news on the X96 MAX+

After buying a A95x rgb 2/16 what is suffering from wifi loss if a hdd is connected to the USB 3 port and had no intention to run on CE (no matter what I tried) including some heat problems, I orderes from 2 different places the easy install X96 MAX+ 2/16.
Knowing how to fix the overheat problem now (mine went to 85 C and the reset), I was plesantly surprised to see that they fixed the problem from the wrong positioning of the sheet metal heat sink. They designed a new bottom plate with a different position of the heat transfer plate.
Also a quite thick (4mm) heat transfer silicon pad was used. The temps never got over 65C. - Well done.
Yesterday I got after a 2 months around the world trip my 3rd X96 MAX+ another 2/16 but this one was going to 75 C fast. When I opened it, the sinicone pad was only 3 mm and did not make contact between the processor and the heat sink. It needed a spacer betwen mount and metal. It is now at 68 C, so another spacer is needed.

The most heat is not generated in normal use but scraping the hhds to get all the info into the database for a few hours.
Even with the CPU usage around 20% and 50% spikes during this process the box gets quite warm on top without any ventilation.

Since the most heat is generated around the logo on top (from the processor underneath, I will put a small diameter (3mm) air hole ring around the X96 MAX+ logo to get some cross ventilation from below.

Under the same conditions (scrapind and building the database) my swiss chese model never goes above 60 C.

It will probably not matter much for you. But it always depends what you do with your box. Internal will boot faster but if you don’t boot 100 times per day you probably won’t be annoyed. But on the other hand if you are already short on money you probably don’t want to spend for an msd card.

It will probably not matter much

This is what I thought

So it’s really that beside the boot (copying the system from storage to ram) there is nothing really happening with the file system once system is up? (without local media indeed)

you probably don’t want to spend for an msd card.

Actually I don’t even have the need. Plenty of sticks and couple of cards are floating around here anyway. Guess I will just try out a usb stick.

Thank’s for your input @Ray

There are other areas where it is really is faster but it depends what you do with your box. Joe Plumber won’t notice.

There are other areas where it is really is faster

What areas could these be?

If any source of read and write is faster than another then naturally, when it comes to any operation that reads or writes, things are going to be improved.

Just how much that will be will vary, not just on the software processes but also on the hardware specs.

The only way to really determine how it will vary for your box is to try it and see.

Just make sure that before you do so, make sure that you know how to revert things, especially if they go wrong, in particular knowing how to restore Android to the box’s original configuration (which is usually done via software but in some circumstances can mean opening up the box to short a couple of pins), so plan for the worst even when expecting the best.

And do some research, especially on here as to what other users experiences have been of using the same process to give you more confidence or put you off completely.

I personally have both of my boxes running exclusively from eMMC, 1 through choice and the other because dual booting from internal is not possible.

One thing that is a definite benefit is that it frees up a micro SD card s;slot/USB port that can be used for additional storage or other external functionality.

Well sometimes add-ons are faster especially if it’s services that use /storage. But we are talking minor improvements that feel major for some but minor for others. @Compent make a good point. You need to feel/try it. For me emmc would always be preferred but only as a dev. Because tar update is waaaay faster. As a user I would probably not care.

I have installed coreelec on internal, because I have no need for the crappy android that came with the box and it only has 2 USB ports. For me it has been running fine that way for at least 3 months. When watching video my box never exceeds 71 degrees celcius.

I wonder if it is possible with coreelec to measure read and write speeds from internal storage and the usb stick? Any tools shipped with the OS are available?

The main place I notice the speed increase is in cleaning the database on a very large library it can be twice as fast.

I wonder if it is possible with coreelec to measure read and write speeds from internal storage and the usb stick? Any tools shipped with the OS are available?

There is a Kodi addon that does that, measures internal storage speed.
For USB speed test there are numerous free programs for download and test speed on a PC.

If any source of read and write is faster than another then naturally, when it comes to any operation that reads or writes, things are going to be improved.

So I can give a update to my experiences.

I’m running the system from usb now for a while and need to tell that I don’t fell that much performance difference/boost (s905x3) compared to my previous setup (raspberry pi 3 with microSD card).

I will go down the road and give a shot to run coreelec from the internal flash. It might improve i/o performance significantly - I hope

Any one got experience with dual boot (android & coreelec) on this or another s905x3 box? It’s not officially supported by the ceemcc tool. Will it work

or will it brick

Just wanted to say, install to emmc worked on my X96 Max+

So I can give a update to my experiences.

Update on the update!

Big difference running coreelec from internal flash. The UI is very snappy (now I finally feel the difference to my old raspberry 3/microsd setup) and opening/loading things happens much faster.

The system boot is also much faster.

And using ceemmc was a ease. Very fast and it gave already a sneak preview of the internal flash write speeds:

Quite impressive that in all it took only 23 seconds to copy the system from usb to internal eMMC. Not sure if even the read speed from usb2 stick bottlenecked it.

Any how I’m very happy now and can only suggest:

INSTALL CE ON INTERNAL FLASH NOW! (if not already happend