Yes - today’s nightly with the non-Gigabit dtb is now booting to CoreElec. I’ve opened a dialogue with the seller to see how they approach an incorrect description…

Thanks for your help!

No problem.
Even if this box was falsely advertised with 1GbE, 100M version it is still probably the version of X96_x4 which is sold in largest numbers, because it should be around 10$ cheaper.

Yes - it was £39 in the UK. I think refurbished referred more to the fact the box had been opened and the cables weren’t tie-wrapped.

I am using a 32GB SDHC Samsung EVO Plus uSD card. Will try a USB 3.0 flash drive just in case though.

EDIT - Using a 16GB USB 3.0 Flash drive in the USB 2.0 port I get the same result as using the SD card - and with or without the toothpick inserted I get a frozen zoomed in chunk of splash screen. Using the USB 3.0 port the drive is ignored

I am using a 32GB SDHC Samsung EVO Plus uSD card. Will try a USB 3.0 flash drive just in case though.

EDIT - Using a 16GB USB 3.0 Flash drive in the USB 2.0 port I get the same result as using the SD card - and with or without the toothpick inserted I get a frozen zoomed in chunk of splash screen. Using the USB 3.0 port the drive is ignored

A post was merged into an existing topic: CoreELEC 19.5-Matrix_rc2 Discussion

I have the X96 X4 (S905X4) box with 4GB/32GB and 1GBit LAN. Android works fine.
With CoreELEC (19.5-Matrix_rc2) the network adapter (LAN) is not working. I can’t activate it and the box is not visible in the network. Otherwise everything looks ok
I used “sc2_s905x4_4g_1gbit” for the installation
The remote control doesn’t work either … no matter

Use 100mbit dtb instead if there is any available.

It doesn’t work with sc2_s905x4_4g either.
According to the network, the box has 1000MBit under Android. This also confirms the manufacturer’s information.

There is still a problem with the network driver

The remote control doesn’t work either

This should get you going for the remote

Maybe if you could provide the “chipset” of the embedded network adatper or a log, someone might be able to help with that also,

Maybe try dmesg | grep PHY to see if you might have a JL2101 chip. Also maybe try the 100Mb driver anyway there are other reports of mislabeled boxes. 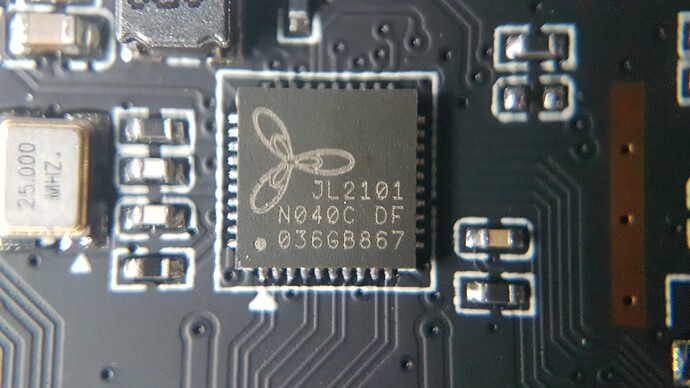 On my 100Mbs-only board there is an unpopulated set of chip pads that are the size of that JL2101. I’m guessing the S905X4 has an onboard PHY which is 100Mbs, and the JL2101 can be optionally added to some board designs to add Gigabit?

I guess that driver implementation may limit some firmware builds running with a JL2101 to 100Mbs (and thus using a 100Mbs cable that doesn’t support 1000Mbs - i.e. one with fewer cores - lets it run OK at 100Mbs, but with a 1000Mbs compatible cable it shows issues? I’ve seen that on other platforms in the past - where a 100Mbs switch was the solution to getting reliable connectivity with a Gigabit Phy on some OS builds)

has the same thing

There is new version of Slimboxtv out now also first one for this box, 16.4.1, but did not test it, because it is new, and there may be errors. Also not want to brick the board. Slimboxtv should be a more capable version of the original installed android, so maybe i will try it later too.

I got an X96 Max Plus Ultra Android11 Smart TV Box Amlogic S905X4 4G which has the same problems both with last stable and nightly build you mentioned before:

I tried several dtb-s, it only works with sc2_s905x4_4g but lacking wifi is a dealbraker.
Can we hope for wifi support in the near future?

Why is CoreELEC slower on Corsair Flash Voyager?

maybe it’s not the fault of the Coreelec system and the reading / writing of these two usb ones?
How did you measure speed?