This is maybe your fault. The audio switcher addon is long time not compatible anymore. CE-19 do have all support already included.

I deleted the audio switcher there is month ago before to go with 9.2.7 and nightly … strange…

I did a full reboot today and there is the new log http://ix.io/3sR3 and I get this too

in new log fresh from today (full system restarted) http://ix.io/3sR3 the line about switcher is no longer here … but BT still do not work…

I mean when I used the audio switcher from vevs I just put 2 files in udev.rules.d (bluetooth-event.rules and bt-audio-switch.sh ) but I deleted this two files there is two months ago … !!!

I did the update to 9.2.7 and nightly and BT work very well for 2 months … suddenly it broke I think
There is conflict somewhere

I just install FRESH Matrix nightly and I get the SAME ISSUE !!! See log here :

If I read the log correctly, it seems that you may have the ALSA audio device as the default in Kodi.

In System, Audio, set the Audio Output Device to Pulseaudio Bluetooth and see what happens.

But the two other earbuds I spoke in this thread do not… Its “Phone” earbuds. I use it before with CE 9.2.5 there is few months ago but they do not work anymore… I see it but I have to connect manually …) this is bad !

But the two other earbuds which I spoke about in this thread do not connect alone… Its “Phone” earbuds. I use it before with CE 9.2.5 there is few months ago but they do not work anymore… I see it but I have to connect manually …) this is bad !

OK, so by the testing of the Plantronics headset, we clarify that the general bluetooth functionality of CE works as intended.

Which enables more focus in these specific earbuds.

If you connect them to a Windows PC, do they work as expected?

Yes all my earbuds work everywhere and they work very good too before with CE 9.2.5 (vevs tweak) and I think with 9.2 nightly0318 with BT automatic embedded build
This BT device work good too now but do not connect automatically… CE connect them when I power it but I have no sound and I have to connect manually

Slowly but surely we are eliminating things.

I recall a past issue where between reboots the address of bluetooth devices could change. 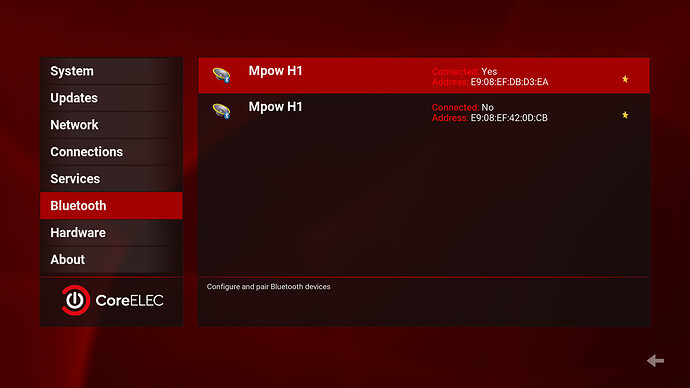 So, as in the example image from the Coreelec config addon bluetooth section, you can see the address of each pair o my headphones.

Can you confirm that after a reboot that the address of your earbuds also remains constant?

Or, if the address changes every time you power up the earbuds.

Yes their address stay constant when I reboot CE or system…

When I power up this BT earbuds I can see that the automatic BT connection work very well (from not connected to connected in BT CE device list ) but I get no sound and I have to disconnect and reconnect manually to get sound.

This is so frustrating because this BT device work everywhere automatically here but not with CE … in My PC in my Laptop in my Android Phones with my tablet with my Ipad with my Iphone… but not with CE.

They work with CE but I have to connect them manually.

That’s BT and can be frustrating, but after you connect them manually and don’t connect them to another device you still have to reconnect manually?

That’s BT and can be frustrating, but after you connect them manually and don’t connect them to another device you still have to reconnect manually?

Its the same. Yes. Every time I want to use it I have to disconnect and reconnect manually

Unpaired from other device ten time and re-paired to CE I can see them connected in CE BT List when I power it up but no sound… I have to disconnect and reconnect manually . And every time I want to use it I have to do the same.

There is an serious issue with CE because ALL my other device described here connect them instantly and I speak about Matrix Rc2 fresh install with nothing other add-on or whatever else. I have two set of earbud BT for phone and neither get connected automatically.

I think with the last CE builds (9.2.7 and Matrix) neither phone earbud’s get connected automatically properly henceforth and we have to use a “true” BT one like Plantronics or some like this

The last CE build which connect automatically good with this BT earbud phones was from 20210318 ng 9.2 nightly

Hello
Any chance this will be fixed in future update ? Actually earbuds from phone do not work automatically with CE and its so bad because there is very good ones now available…

Please make a fresh clean install of last CE-19 release 19.2_rc2 on a boot media. Start it and enable debug logging in Kodi.

Restart the device and after the reboot try to connect and trust your BT device.

Only the kodi.log is currently needed.

This is exactly what I did, excepted that I installed a fresh nightly before and immediately rc2 (because nightly give me same issue )

Do you want to have debug logging or absolutely from fresh rc2 ? Remember all build get this issue from now…