Is there any channel editor for TVHeadend similar to Enigma2 (like dreamboxEDIT for example)?

Thanks for the answer, I know about this possibility. Unfortunately, this is not an editor for the existing settings in TVH.

I never found anything suitable … and even that link requires Windows to do what it can do. I do not use Windows.

I ended up doing a one-time manual set up of all the channels I wanted, including ordering them in the list, and then ran a script to extract the info from tvheadend and create a list of all those I had mapped.
That list is then used on all instances of tvheadned in use as a ‘bouquet’.

Unfortunately it does not update automatically when channels move frequency, or disappear etc., so a little maintenance is needed to edit the master list, which is then copied to all instances of tvheadend to keep all in sync.

Yes it is a bit of work, but it gives the required results.

I took this route because I have no idea how to create a set of bouquet files like those for Sky or Freesat etc.

If that could be done relatively easily I would be greatly interested also.

where $ADDY represents the IP address of the master tvheadend where I did the manual set up.

If run from a terminal it should list all the mapped channels and their Service numbers.

You can use your enigma bouquet directly on tvheadend

Copy the file to /storage/bouquets/ as example

Enable it and the channels will be mapped automatically

It’s a lot better, thanks for the info.
What file/files exactly do we need to copy to the box?

Copy only the bouquets you want “file.tv” 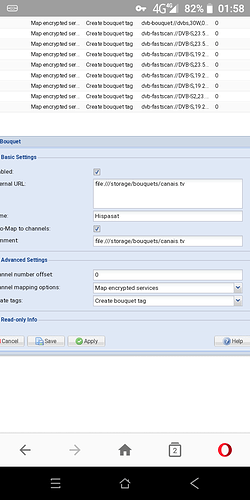 Is there some script or such that can be run against such a channel list to correct it when channels change frequency?

That help me with some channels frequencies change

You have a master and some instances ?

It is not possible to instances connects direct on master with tvheadend client ?

Yes the network will check for new+changed muxes.

How are those changes to be applied to the channel list without manual intervention?

Yes I can, and do of course, do this manually, but in the case of bouquets (not just channel list) I expect this to be applied automatically, as happens with Sky & Freesat bouquets.

I guess the real question is how to generate a set of Bouquet files and not just a channel list.

Tvheadend to automatically if the channel was mapped before …

If not I think only with manual intervention…

But I don’t know how it does that … Perhaps something to do with satellite.xml file …

I thought you might have found something I missed.

Tvheadend will use any of those bouquets which come preinstalled. What would be needed it seems is a similar bouquet that the user could set.

No problem, I can continue to manage things manually.

Autobouquetsmaker works well on E2 devices to track channel frequency changes, but is not available that I have found for JEOS systems.

Tvheadend will automatically map the channel with the new frequency

But won’t know of that really works

You said that have a master and more instances … The instances can’t connect to master by tvheadend client?

If don’t … Update master and copy the files for the other instances.

I think that tvheadend does not need any channel editor because it is already included in your web configurator.

For example, my tvheadend has 915 services installed but only 327 enabled, of which only 228 TV channels are mapped because many are duplicated or offer the same content in SD and HD. A single channel can be available in DVB-T and DVB-S (in one or more transponders) in two different qualities SD and HD. At the end there are 110 channels in the first group, 78 in the second group, and 40 in the third group. I do not use bouquets, only my personal tags (groups). Once this is done, you just have to map the epg guide and the picons.

Tvheadend is who chooses the TV service available for the requested TV channel according to my preferences (DVB-T tuner, DVB-S tuner, mux, satellite position, and HD or SD quality).

Well, like @ruimaia said, with an enigma tv channels editor one can create tags like kids, movies, sport, …, order them as you wish and they appear in kodi exactly in the same way, with channels in the same order as saved in the editor. I couldn’t find an easy way to do it within tvh web configurator.

The only difference to enigma is the “comment channel” it will only map the channels.
I use dreambox edit … @JohnBoyz and I can use that program in Linux too over wine …

Yes I could … IF I was prepared to install WINE which I am not.
Even if I did, it would not make any difference as I already have an “indirect” method of creating a channel list or several lists, and ordering the channels as I wish.

Tvheadend automatically maps these channels, but it will not follow a channel frequency change.

Maybe there is some other/alternate information that could be included in the channel list that would allow Tvheadend to track and map the channel should it change frequency.
If yes, I do not know what it is, so maybe someone can enlighten me?
Thank.

EDIT: … it seems I jumped the gun … forget this edit