Okay, confirming that the remote is running on a Ki pro with the Matrix on board can help here. And it would be nice to have a link to config …

as_id, the configuration is the same as it was in previous version. Can you write what you did?

ALL of them? Repository for AmRemote & Meson IR Remote Controllers

I guess my Minix U9-H will have to retire later on then, will probably wait for the stable release of Kodi Matrix. What are the best devices nowadays for Coreelec? Thanks CE team for your awesome work, my current 9.2.5 setup works wonders! 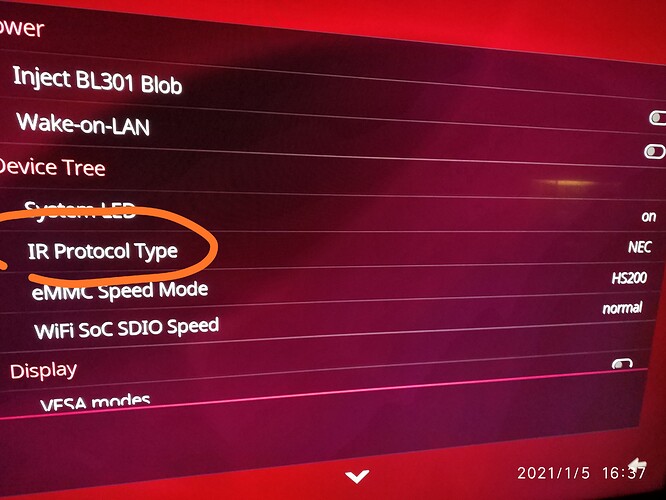 CoreELEC Settings Hardware Section There are some different options to customize the used device. Please keep in mind that some option may be accessible or hidden depending on the used hardware. Some options are marked with DANGEROUS: DANGEROUS means there will be needed to enter a random confirmation code before this setting get applied! Changing this option can maybe prevent the device from booting! Enter the CoreELEC Hardware section [enter_hw_section]

I would suggest a box with an S905X3 or better SoC.

What are the best devices nowadays for Coreelec?

I have the Minix Neo U1, so I’m in the same boat as you.
From what I’ve read, I’d choose either the Odroid N2 (4 Gig RAM) or the Minix Neo U22-XJ. Both have the new S922 chipset. There is also the N2+ but that additional power would go to waste as the N2 is already more than powerful enough - or so I hear. The N2 would probably be the cheapest option.

Let me add a little to the information you have provided.
The Odroid-N2 is no longer produced, instead the N2 + is manufactured and on sale.

The U22 can do Dolby Vision but it has a bug that effects SD card booting. But with ceemmc it works quite well. If you don’t need Dolby Vision I would go with the N2+ or C4.

Can coreelec do dolby vision?

Dolby Vision is being worked on. Unfortunately getting it working is not as straight forward as getting other HDR formats working. It’s a bit more complicated, less well documented plus there is some bs to do with licensing that is causing an extra headache for the developers to work around.

@cdu13a I have a ODROID N2 and planning to buy a LG OLED CX.
What can i aspect what HDR formats are working with coreelec?

And ive got a lot 1080p movies how is the upscaling is it better to do the tv or kodi the upscaling?
What resolution to choose for the coreelec gui with this tv?

@KodiKinG I would expect all the HDR formats that the TV supports except for Dolby Vision should be usable with the Odroid N2. The SoC in the N2 is not licensed for Dolby Vision, so even if we could get it working we couldn’t release support for Dolby Vision support on an unlicensed SoC without getting Dolby very upset.

Leaving the resolution of the gui in CoreELEC at 1080p and letting CoreELEC change the resolution for playback when needed is usually preferred option. While the N2 is fast enough to do a good job at displaying a native 4k GUI, 1080p will always be that little bit smoother since it’s 4x less pixel for the system to be dealing with.

Dolby Vision support would be great.
I understand that there is no chance of this with N2 or N2 +? So what device would I have to buy to possibly support DV and CoreELEC?

As far as I know it would be only Minix U22 from the official supplier list right now.

any way to disable pvr.ths addon from command line? can’t acess n2 from ui, it is in bootloop. can access from ssh for few seconds

I have the 65" CX and the N2+. I couldn’t be happier, to be totally honest. As sojer2005 already said, upscaling IMO is better handled by the TV.

It hasn’t mattered for my usage but the CX itself doesn’t support HDR10+.