since version 9.2.1, I got its release notes at every startup/boot.
I searched for the right setting to disable it, but found nothing.

Can anybody help me with this?

The release notes should only appear after upgrade, if you reboot they shouldn’t appear. And they appear in kodi restarts, not reboots, after upgrade until your next reboot.

he maybe thinks booting log, right? Why is it there when booting?

sry,
I try to explain it more detailed; I upgrade from 9.2.0 to 9.2.1.
Since then this appears on every Kodi Startup, not only one time: 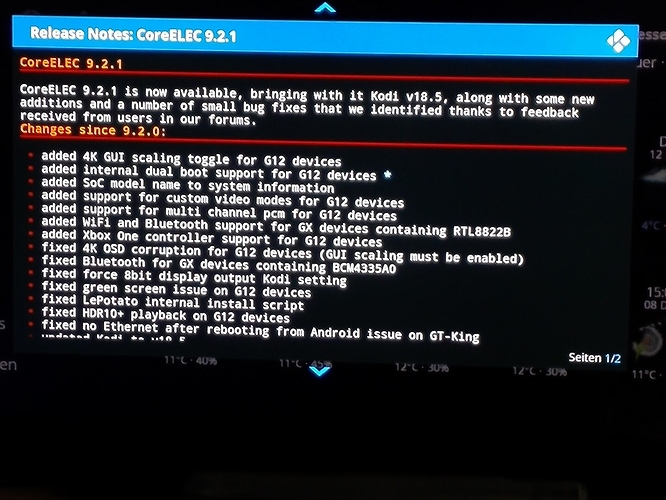 maybe I had to delete a file or something?

Restart CoreELEC from the Kodi menu. Turning off and on from the IR remote control does not save changes.

wn.
After a few seconds, this workaround does not work either.
Various boxes with S905W are used, remotes are similar “air mouse with keyboard”.
Mouse and keys other than “backspace” do not work.
A config option to disable release notes at startup would be great.

The release notes block everything - there is no shutdown possible except e.g. via ssh.
Pressing “backspace” quick enough after a reboot disables the release notes until the next update.

Follow those steps, and you should no longer see the release notes upon startup.