The technical specification states that the Linux kernel will be mainline. Isn’t that very good, if it’s true?

You have some history here:

The subject of what kernel CoreELEC uses (and doesn’t currently use for example the mainline 5.x kernel) keeps popping up in other threads and ends up going in directions that get more and more off-topic for those threads. I also find myself answering very similar questions often. So I decided to start a thread to continue the discussion, so that there is one place to have that discussion. Please keep it polite.

Bottom line, mainline is not ready for use with CoreELEC and provide the quality we provide with other kernels. It’s expected that some of the devices will run 5.4 kernel but that has still to be completed.

Now on sale at Khadas, and in the Khadas forum thread for A311D2 i posted links to Youtube A311D2 reviews. Both Android and a Linux, now you can see actual use, speed etc. Hope it helps.

Not really mainline instead an older version of mainline kernel with custom drivers which might not be upstreamable.

It’s being worked on but no ETA.

Who is working on it?

If you need something to test the work then feel free to ping me. I have one but i can’t do much with it until there is mainline support or maybe coreelec team adds its support to ce.

Who is working on it?

Status about the future of CoreELEC Releases

Status about the future of CoreELEC With the launch of the last few Amlogic SoCs like SC2 (S905X4) and the upcoming T7 (A311D2), the support of open source platforms, such as CoreELEC, seemed to have come to an end. We had no access to source code nor documentation for these new platforms, without which getting CoreELEC working on them was just about impossible. Since the platform SC2 the hardware decoder got locked and protected by TEE. But today we have some exciting news to share with the C…

Hi !
In order to exploit the new GPU, do you think it would be possible to add a 4k@120Hz display mode in the Kodi interface? (especially to reduce latency in menu navigation)

Dommage ! Nevertheless, for the rest, according to the first feedback from the GPU tests, it seems that this new chip is able to perfectly run the Kodi interface in 4k in a very fluid and stable way (60fps), even by increasing the definition of the covers. Which is great news! Finally HD covers!

I will be happy to help with testing on vim4 while i might get gt king2 soon.

Let’s get CE on Gtking 2 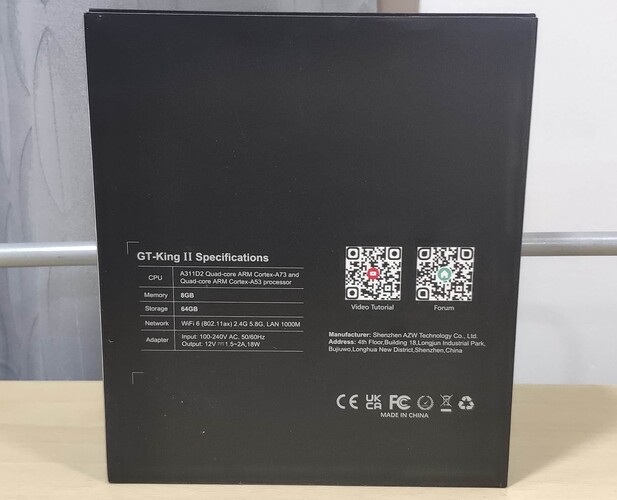 It is a step up with extra RAM, up to date WiFi/BT, better GPU, support for AV1 and greater I/O possibilities.

But still just a small step up from the previous S922X generation, which from a video perspective, likely satisfies a whole lot more to give it more longevity.

However, when you take all things into consideration (including the Vim4), these stop gap solutions before the eventual and unknown release of the S908X, pale into almost insignificance when you compare to the latest Rockchip RK3588 boards being released and the results being demonstrated out of the box for the same and even cheaper pricing (when Radxa do release their variations).

Raw power and overall capabilities are not necessarily the be all and end all when it comes to purchase consideration but when paying the same kinds of price, these benefits become harder to resist.

So for me, unless these A311D2 boxes and boards are offered at significantly competitive price points then I believe that they will become almost obsolete by as early as the end of this year.

Chip shortages may potentially come to their short term rescue but the writing looks already etched into the wall.

It’s a definite no for me unless it dips under $€£100 delivered and based upon current pricing, I see no way for this to happen save for a going out of business kind of sale.

From a CE perspective though, I am sure that it will work very well for what CE was generally designed to do.

If you can live without hw decoding, hdr and all the other candy we have for a perfect entertainment system in CE then yes Rockchip is the better choice.
I was doing RK before and I liked where it was going but it halted because of the same forces that wanted to kill of AML in LibreELEC.
5 years later, AML in LE is dead and RK is also dead. If you can find a group of RK Enthusiasts then that would be ideal. You basically need CE for RK but I am not aware of a Team like that.

Hello, is there already a functional beta version of CoreElec for the VIM 4 ?

There are no public builds yet for the VIM 4 yet. As much as we would like to have already made a release, the VIM 4 doesn’t just represent a new device for CoreELEC. It’s a new device, a new family of Amlogic SoC, and a new vendor kernel.

So some of the foundations of how newer devices based on newer/upcoming Amlogic SoC are being put in place as we work on the VIM 4 support, which makes the process takes a little bit longer then usual this time around.

Ok, thanks for the reply and your work.

It’s still a long way to go. Our main developer also need some very important equipment which we need to find the funding for first.