For someone now looking for a single-board computer for Kodi, the New Era announcement seems to point especially to the Amlogic T7 family of CPUs, namely A311D2. At least, that’s my take based on the fact that it supports HDMI 2.1.

I find two products with that CPU: Khadas VIM4 and Beelink GT-King II. I’m interested in seeing opinions that compare/contrast these units in terms of their suitability for CoreELEC/Kodi (future suitability in part it seems).

They are alike in many specs. I’m not very knowledgeable about these things, but here are some possible advantages of each that I see:

VIM4 seems more like a project board for DIY enthusiasts. It has some additional connectivity that I don’t understand and likely would never use for running CoreELEC/Kodi.

On the other hand, the Beelink support forums are a little scary. Some people seem to be quite disappointed (yes, that’s normal) and a lot of recommendations to reinstall the firmware. A lot of people have trouble with this, and it seems to require a Windows computer, which I don’t have. Khadas seems to have much better documentation, and the OOWOW system eliminates the need for external hardware to set it up and manage it.

What do you think?

Do you want an SBC or a powerful CE box? The VIM4 features you don’t list tells me you don’t care about many of the notable differences. Installing CE is so easy via SD card, not sure what the buzz about OOWOW is if you mainly are interested in CE.

The GT-King II has a USB 2 port you didn’t mention. The work CE developers have done is fantastic and it is an excellent client but there are many excellent CE clients that cost less.

I was actually hoping the GT-King II would be a nice option because of the possibility of dual booting Android but it has terrible Android and terrible support. Alternate OS support doesn’t exit for the GT King II yet. CE source will likely spur on future development though.

Having a few S905x4 boxes I don’t see any reason to spend extra for a T7 at this point. None of the them have good Android, and slimBox and SuperCeleron Android won’t help.

If ur into iptv then the buzz x5 is a option,serves your iptv then dual boot into coreelec for movies

Only if you are into illegal streaming services being sold for an exceptionally high price on a S905X4 box.

The new era also supports S905X4, so don’t limit your options if such a SOC supports the functionality that you are looking for.

You mention Kodi but some more information on what specific areas of interest might invoke more precise suggestions that might even save you some money.

Dependent upon your budget, if Kodi use is key then you have more options with almost guaranteed long term software support in the Intel/AMD x86 area, even though you will pay a much higher price.

You could even consider a board from one of the other SC manufacturers but that would negate use of Coreelec, so better suited to discussion on other sites.

Do you want an SBC or a powerful CE box? The VIM4 features you don’t list tells me you don’t care about many of the notable differences.

The GT-King II has a USB 2 port you didn’t mention.

The new era also supports S905X4, so don’t limit your options if such a SOC supports the functionality that you are looking for.

You mention Kodi but some more information on what specific areas of interest might invoke more precise suggestions that might even save you some money.

Thanks for the replies. I want a powerful Kodi box, without buying a full-on computer. All I want it to do is play local media - period. Oh, and not require a lot of time and fussing to manage it. Supporting HDMI 2.1 seems a way to kind of future-proof it. CoreELEC on one of these boxes seems like a way to do it, but I could be wrong.

As noted, I didn’t list the additional VIM4 features because I don’t understand them, so I guess, yeah, at least now I don’t care about them. Both of these boxes have an additional USB2 port; that’s why I didn’t mention it.

Iptv isn’t anywhere near expensive,I’ve got a 12month sub that has all sky/bt/USA,only cost £50

The point is some Android TV “boxes” overcharge casual users for their IPTV capabilities.

I have tried both the Khadas VIM4 and Beelink GG King II running on Coreelec ne.

Personally I have decided on keeping the VIM4.

The VIM4 has usefull power, function and reset buttons. I hated yanking the Beelink power cable to force a restart.

I found HDMI CEC on the Beelink to be flaky. I was at a stage where it was working then it would suspend the device with the TV off but fail to wake up when the TV was on.

Although CEC works fine on the Khadas, they both shared a problem with ‘Switch source to this device on startup’ being off but would switch anyway.

I found the skull light on the Beelink to not be useful as an indication to the device status. Also it was a dim red during use which should be a dim green. The Khadas has a small LED on the front which is a nice indication.

I found OOWOW to be a game changer when it comes to using the device on various platforms. It was nice to but able to put Coreelec on the eMMC from the onset. This was more difficult on the Beelink but as of firmware 20221117 I was able to use ceemmc to move it to the internal.

I am currently using the Khadas VIM4 using the KKSB passive cooling case and the temperatures are similar to the Beelink. Running at 65c during idle.

The only issues currently which is shared by both devices is frequent crashes (could be skin related) and no HD audio passthrough.

I find it very funny/strange some of yous are talking about illegal streaming,by the way yous have said it your kinda looking down on us that do it,and that’s probably around 95% of people on here that use it for movies/tv/iptv

Please keep the mention of illegal stuff out of this thread or I’ll close it and remove it from the forum.

I’m wondering, for the VIM4, did you install a real-time clock battery holder and battery, and is there a place to put it in the case, or just let it sit on top of everything?

Also, are you using any kind of remote with it? I guess it would have to be bluetooth?

With bl301injection on the GT King II I have power off and on via the remote, and in Android long power I can restart to CE I don’t miss the buttons on my VIMs at all. Where do you need them?

I have seen the RTC Battery available here:

The Khadas RTC battery is an "Energizer CR1220" button battery attached to a 60mm long pigtail with JST female connector (1mm pitch). Simply plug-and-play with a VIM3/3L/2/1, Edge-V or Captain board. The battery can be securely pasted to the board...

I dont think i will be able to get one at the moment as it isnt available in the United Kingdom.

Other than keeping accurate time what other use is it? I have not found the need to have it installed at the moment.

There would be enough space in the KKSB case for it to sit inside.

Currently i am using my Harmony One remote which operates via Bluetooth.

The included remote works fine on android but on Coreelec i found that there was no input via infared or paired via bluetooth.

My friend has the Beelink II currently for testing, and it would be great to have the remote function. Under coreelec settings did you enable Inject BL301 Blob and what device did you select for IR. I remember there being several to choose from. I tried the Beelink and Beelink 2.

My GT King II remote was dead on arrival so I am just using another one that came with the HK1. It is pretty much the standard remote these days on Aliexpress for many device.
For Android BT I am using the G20S but it happens that in IR mode it also sends the same keys as the HK1.

However most IR remote works with CE. I only use remotes with number keys since I like how they work with PVR.

As I use the VIM4 for daily driver and need to have an IR receiver as not all buttons work over CEC I assembled an receiver. Part IR diode, 38kHZ, one resistor between 1-10k Ohm. Working flawlessly 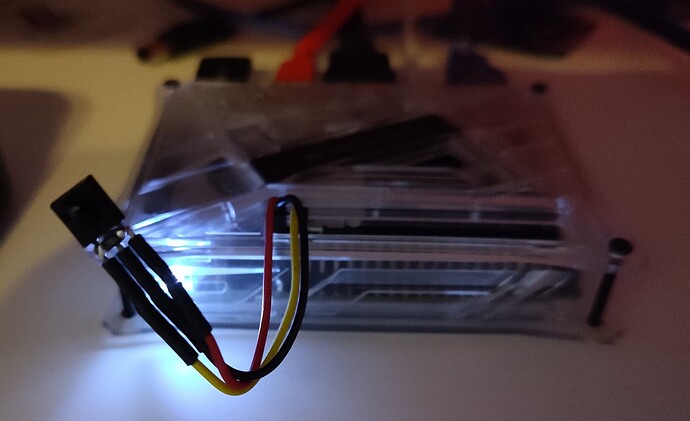 Holy cow! I’m impressed. Is the resistor in that cap between the red and black wires? Where on the VIM4 does the lead plug in?

I’m guessing on the 40-Pin header 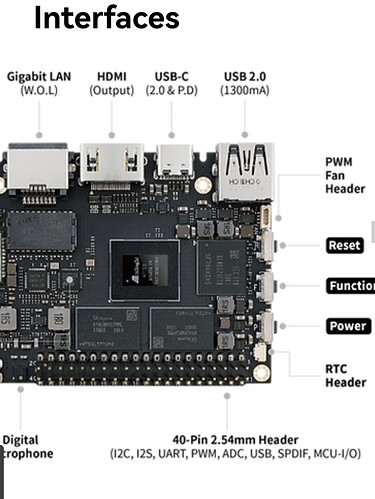