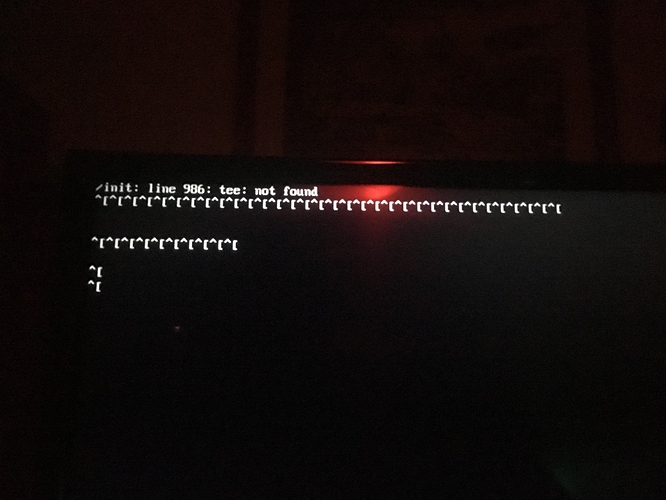 <<<<-UPDATE ERROR ->>>>>>>>> I have installed the VIM3 CoreElec Nigthly _ 20190911 Amlogic-ng.arm and in the last update it crashes when starting on the red home page that COREELEC says, I had to reset 3 times so that it ended up starting.
Has it happened to someone else? I have disabled the updates but the “pending updates” message still appears.

There was a problem with the 20190911 nightly image that makes the update system fail.

If you can ssh into the device the following will update you to the 20190912 nightly image that doesn’t have this problem.

Same 2 me. how to solve the boot problem issue? (Emmc)

I have the 09/11 update instaled to emmc on vim3 and it seems to be running ok. Will the problem occur when I try to update? If so what steps do I need to take to update to the “fixed” build?

If you are having problems updating from the 20190911 nightly build. ssh into the device and enter the following two commands for quick and dirty upgrade to 20190912. wget https://test.coreelec.org/cdu13a/tools/911fix.sh -O /storage/911fix.sh sh /storage/911fix.sh and then reboot.

Thankyou, worked perfectly. Will auto update take care of the next nightly updates again from now on still?

Yes, 20190911 build had a missing configuration that made it break during an update. All builds prior or after this one shouldn’t have any issues.
We removed this build from the archive to make sure it’s not used anymore by anyone.

I will check that and if I have same problem, i will change it to update to the nightly from the 13th as well.

when auto or putting file in .update folder wont update just sits on coreelec splash screen with no words in top left corner just sits and does nothing

OK, thanks for the info.

What I will try now then is to copy the latest .tar file to the box and see if it fully updates when booted.

Update: No that didn’t work.

Looking at your script though, it seems to replicate the original advice, which was to replace system and kernel.

I’m struggling to know what will be the way forward to enable automatic updating to work, short of starting from scratch.

The only thing that does sit in my mind is that the original advice talked of going back to a build earlier than 11, so maybe that is the change required.

I thought that I would try to be clever (but failed).

I modified the script to pull down the normal nightly tar, starting with 10, rebooting and then with 12.

After 12 had been applied and the reboot complete I went through the process to do the automatic update to 13 via the prompt but things stuck again at the splash screen,

Modifying the script to point at 13 worked and it says I have 13, so for the time being I’ll pull updates down this way. It seems to do what a normal update does and can easily live with it.

How do u ssh

After last update, on 905x before show boot splash i see /init: line 986 tee not found and stack on splash

UPD: use 911fix.sh resolve this trouble.