Got my N2 set up and working but was disappointed to see the the GUI still isn’t true 4K, sure you can set the output resolution to 2160p but the GUI still appears to be rendered to a 1080p frame buffer and then just upscaled to 4k.

I have a cheap N3450 intel box running LibreELEC that renders a 4K GUI the way it’s supposed to be rendered. Anybody know why Amlogic hardware just seems incapable of rendering a true 4K GUI?

And yes I know skins are only 1080p but that doesn’t stop poster and fanart from rendering at 4K as can be clearly seen from the following comparison picture. 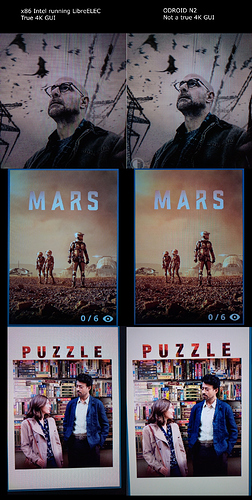 Massive thanks Ray and the entire CoreELEC team, this just made my weekend

Have you tried it? Does it look the same now as it does on the NUC?

Yep, just updated and it looks exactly the same as on my Intel machine, perfect hires artwork

In fact the N2’s 4K GUI feels much smoother than on my Intel machine.

The GUI is definitely not as smooth at 4K. I feel that the GPU is a little under powered for native 4K GUI, at least in my opinion.
When I scroll through my movie collection, FPS does drop below 60, sometimes considerably.
It’s not bad, but it’s not the same silky-smooth experience as it is at 1080P.

Please when posting issues put them in the correct category.

What a pity. We must be able to find a compromise. Maybe try an alternative definition to stay in 60FPS. Try 2560 x 1440 + upscaling ?
Can we add this resolution?

I don’t share Arthur’s opinion but maybe I’m not that picky. GUI at 4K60p and I don’t feel a difference. It is usable. And maybe we can do more about it.

Video navigation in the menu with framerate displayed ? Please

Is that what you want?
4k60p scrolling in GUI with debug log

I wasn’t trying to say that 4K GUI performance was a deal breaker, or bad. I just feel that frame rate dips down to the 40s just doesn’t present the user with the same experience as a solid and constant 60FPS you get in 1080P.

Somebody should edit the topic title…

Look at the charts on any video card review site. FPS will always go down somewhat on any device if you ask it to do 4x the work. Just like in the games those sites use to test, you can pick what is more important to you, absolute highest frame rate or absolute highest resolution, and set your settings accordingly.

Keep in mind this is only the gui we are talking about as well, Video frame rate and gui fps are different. A 60fps video will still play at 60fp no matter what the gui is doing.

Kodi’s GUI rendering is also far from optimal on any device, and needs work. While we might be able to tweak a bit better performance out of it a proper fix that would take big changes to kodi, that are best left for the kodi developers to do.

Thank you so much ! Indeed there are already framerate falls here (60-> 45fps), on simple black background. But in the navigation of a wall of covers, it’s worse?

Can the devs insert an alternative definition of 2560 x 1440 ? This is maybe the optimal resolution to stay between 55 and 60 FPS.

What device would display this weird resolution?

the majority of Android devices (QHD), as well as consoles in 80% of games (PS4 pro)…

Well my covers are all on a nas so the GUI is not throttling it. For me it looks the same as without this change visually. And no we won’t do any other resolutions. 4K GUI is not officially recommended anyway but at least now it is a real 4K GUI. Use 1080p if you like watching at FPS values

I wasn’t trying to say that 4K GUI performance was a deal breaker, or bad. I just feel that frame rate dips down to the 40s just doesn’t present the user with the same experience as a solid and constant 60FPS you get in 1080P.

I agree, a 4K GUI isn’t for everyone, which is why people are free to choose. Personally I’d rather have a lower GUI framerate and sharper image quality than a rock steady 60fps and absolutely abysmal texture quality.