If I change the playback volume via Video OSD and mark as “Set as default for all media” this works fine and holds for all media, until I reboot and this is reset to 0.0 dB.

I’ve tried in Kodi for Windows & the setting is held so it looks like it could be a bug in CoreELEC (using Matrix 19.1 rc4).

This is the setting I’m referring to: 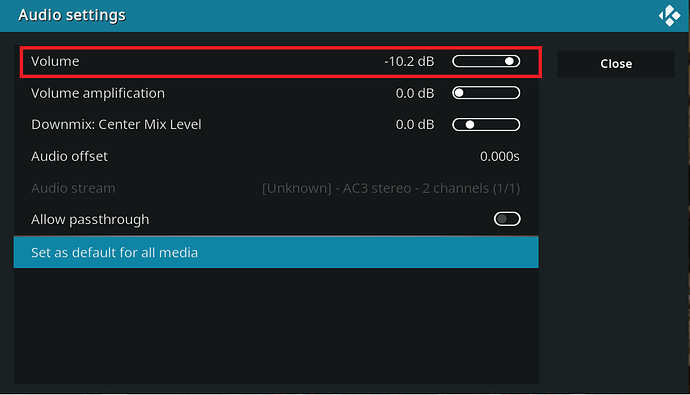 Does this by any chance only happen when your default audio output device is set to Pulseaudio?

This was a while ago so I can’t remember exactly since I gave up on it, but I think I deduced that it was something to do with Passthrough & AC3 Transcoding which was causing the issue. I’m not using Pulseaudio just SPDIF with Passthrough. Do you think it should work if I’m using these settings?

I mentioned it because I have noticed that when using bluetooth as default audio that when I set the default volume at a lower level, after every reboot the sound returned to maximum, despite the entry 0.600000 in guisettings.xml remaining at the amended level.

I know that this has not been an issue for others and doing some more research I found references to a setting in /etc/pulse/default.pa that could perhaps cure the problem for pulseaudio where in addition to the lines:

Automatically restore the volume of streams and devices

But so far I am unable to make default.pa r/w in order to test it.

During my search I came across your thread and had wondered if the scenario was perhaps similar, so had to ask.

Fresh installs also seem to generally yield the same problem but sometimes in the past, when a new version has been released, it has worked for a short period.

So trying gradually to pinpoint where the issue may lie.