Support/builds for other s922x devices

I know the recommended “future” device atm seems the be the odroid N2 But I was wondering if there will be support for other s922x devices like the beelink gt1-k and the UGoos am6 fan cooled with built in WiFi Bluetooth and emmc etc plus the inevitable flood of Chinease devices with the s922x soc?
I ask because atm there is a huge choice of boxes that are compatible with coreelec (s912/s905/x) which means users can choose a box that suits their individual needs and still get the great experience of coreelec.
IMO the ugoos specs are superior to the n2 and it’s going to cost less especially by the time you’ve added WiFi/Bluetooth/power supply/emmc and reader to the N2

This is not planned. I don’t see any S922X device currently on the market being superior to the N2 bit it’s my opinion. The work we done was only possible because a lot developers on the team had an N2. So there is little to bo interest supporting other devices but everyone is welcome to contribute these changes.

I think the ugoo am6 is a strong competitor In my opinion because of the fan cooling and built in RSDB WiFi module it also has built in Bluetooth and emmc as standard although it only has 1xusb3.0 ports and the other 3 are 2.0. This is why I was wondering about plans to support other devices because for some people real dual band WiFi and fan cooling may be more important than having 4x usb 3.0 ports (even tho only 1port can reach 3.0 speeds at a time)
It’s also cheaper which is a huge Benefit to those of us on a tight budget o

@Wizzi07 the Ugoo does not have venting on the case for the fan so hot air is being pushed around the case and then you also have the noise from the fan which are both negatives.

In my testing the N2 has not gone above 32oC, with the SoC being 12nm it really does not get hot like the older GX* based chips.

Where are you getting your pricing information for the Ugoo from?

We do not have plans to support Android boxes with the S922X at this time, as there’s very little point with how good and well priced the N2 is.
Perhaps we’ll change our minds later on when there’s nothing else left to fix on that device and we deem the 4.9 kernel and Kodi fully stable.

I didn’t think about fan noise tbh that’s a good point!.. pricing according to priceboon will be $79.99 shipped from gearbest for the 2gb/16gb version, that’s with WiFi Bluetooth power supply etc included. I do realise though that this is a estimate since it’s not due to be released until may but they do state one of the main selling points as being cheaper than the n2 and gt1

We’re aware of the plethora of different boxes that are likely to flood the market very soon.
In the past there was a community developer (kszaq) who decided to add support for every possible box he or his users encountered, and that’s why CE currently supports pretty much every S905*/S912 device out there. None of the CE (nor LE, AFAIK) devs are willing to do something similar for the new SoCs.

Why people acting like the N2 so expensive is beyond me. 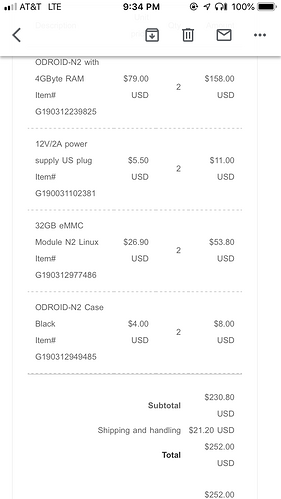 The driver has to be available for the wifi/bt functionality on those Chinese devices otherwise it’s useless, we have had trouble gaining drivers for these devices in the past.

I think personally its better to buy a S905X device if you don’t want to pay the extra for an Odroid N2.

We could very easily add support for the new Chinese devices, but do we want to… is a question that has weighed heavily on the whole team.

Supporting the Chinese S905/912 devices created a massive support burden on everybody who has worked on CoreELEC, if we add support for the new Chinese S922X devices then this would place a burden on the team all over again.

We want our users to have the best possible experience and right now we feel we can deliver that with the N2 as nearly the whole team has one and we are all working from the same device, we can not reliably do the same with any other device unless we all have one.

You have to ask yourself if you are prepared to spend $80 on a new device that has no guarantee of continued support or functionality, is it not worth spending the $30 extra to be guaranteed support and functionality.

Maybe it makes sense open S905X2 thread?
Development LE is underway, many test builds, many is working. Seeing, it quickly to be, if altogether…

Noone of the team owns such a device.
It is impossible to work on a device without the chance to actually test anything.

Each developer needs this device, because everyone is working on different aspects of CE.

We don’t have plans to support generic Android boxes based on the newer SoCs at this point, it’s not just the “lack of money”. Everything has been answered in previous posts in this thread already. Nothing changed since.

you joking right? with shipping that’s an average of $126 per device.

And that is still cheaper than the now much slower Vero 4K+. The N2 is totally worth the price.

I am privy to the efforts in development of this s922x N2 by all the developers in slack.

The amount of FREE time they have allocated in their daily lives to make the Odroid n2 work astounds me.

The software they have developed so far is worth more than $100 USD considering the ongoing OTA updates.

The old days of 1080p was not as complex in developing images for different chinese hardware. Even then it was a total cock.

To pick up every chinese S922 box and make them work with CE is just asking too much of the Team who have REAL Paying jobs and a REAL LIFE to fit into a 24 hour day.

Think about that before putting a $$$$$$$ value on other hardware.