Hi solfeio. Do you know that you can run Plex media server through docker? It works very well and you get updates automatically. I used to use @tnds82’s add-on but found it a pain to update to the latest versions of PMS.

Yes I do. I tried it yesterday out of desperation but it was slowing the whole system down. I would ssh into CoreELEC and monitor the system via top and noticed high cpu usage by the Plex server. Needless to say I uninstalled it.

Thanks for the suggestion though.

I had a similar issue when I upgraded a nightlie about a month ago. In the end I did a full reinstall. Its down to a major Kodi branch change which breaks quite a few addons. I saved myself the hassle of having to resetup all of the TVH settings by moving the TVH userdata into a backup and then restoring just that data, brough all of my TVH back on the newer version that was pulled in.

The best approach seems to be to upgrade CE, remove your addons database. Re-enable each addon testing if it will boot after each one.

@boot2k3
Do you know when (if?) auto update will be available ?
Is there any critical issues reported ?
Thx

I followed the instructions at the beginning of this thread: disable addons (including TVH server and client) > upgrade to CE 9.2.0 > refresh repos > update addons > enable addons.

Many thanks to the developers for their continued support of generic S905X boxes.

k3 pro user here.after upgrading to 9.2.0 from 9.0.3 tvheadend 4.3 stopped working for me.i used to use crazycat drivers without problems but i cannot anymore.i can connect with tvheadend 4.2 from the official repo but then i cant transfer my channel list from 4.3 to 4.2.anyone can help me?

Did a fresh install on my Mecool KM9 PRO. All works great (ethernet, wifi, …) but bluetooth is not working anymore. It was working on one of the nightlies of the end of august.
Plugged in a cheap usb bluetooth dongle from AliExpress and all is working fine. Is some driver or setting missing for the internal chip? Thanks!

Try to download the tar file again and update your CE with it.

go into coreelec settings and select manual update, selec coreelec 9-0 and then the 9.2 release, after download is complete the box will restart itself and update.
I just did and it worked flawless - I didnt disable any addons either.

Thanks, I know the manual update.
But I want to see how the auto process is running once in my life

That’s why I can’t wait for it to be available !

Yeah, same here. But I was to eager, it’s 3 more clicks and then the update process is auto

Hello. Thanks for the quick reply.
Tried this, no internal bluetooth. Tried with the latest nightly, same problem.

Yeah, same here. But I was to eager, it’s 3 more clicks and then the update process is auto

If I go for manual update, as I don’t have any binary addons from the CoreELEC repository installed, I should not encounter any issue ?

You shouldn’t encounter any issues, since most of the issues have been related to a few different addons, or hardware support on specific devices.

While testing the update I did multiple updates on 8 different devices from across the range of supported devices, from various different versions of coreelec with different history and setups, and encountered no issues. That being said, I’m not able to test cec, tvh, dvb, pvr. Nor am I able to test every possible device and configuration supported by coreelec so experience may differ.

As for when auto update will be turned on, that may take a bit. It’s a combination of wanting to see if we can figure out some of the issues first, and the fact that we now have several developers on vacation, so are a bit short handed.

If it was working in one of the August nightlies then perhaps going back to that and producing logs of it working to compare against what happens now.

Everyone who has a BT issue should try 0917 nightly and see if it’s solved.

@cdu13a Thanks. I’ll try manual on Sunday if auto update is not available before.

Ok Two Days Testing and there is definitely a problem with TVHeadend in Live Playback. The Wife mentioned it yesterday but I had not seen it. During live playback the Picture freezes the buffer indicator climbs slowly and eventually you get the message about the TVHEADEND not being able to connect to backend. Now I made a few adjustments after the upgrade, I got timeshift working using RAM. Firstly I need to reverse the changes and see if that makes a difference. I have set the internal tuner as the highest priority as I noticed a high number of transport errors (which I did not get with 9.0.3.) on the Xbox Tuner. 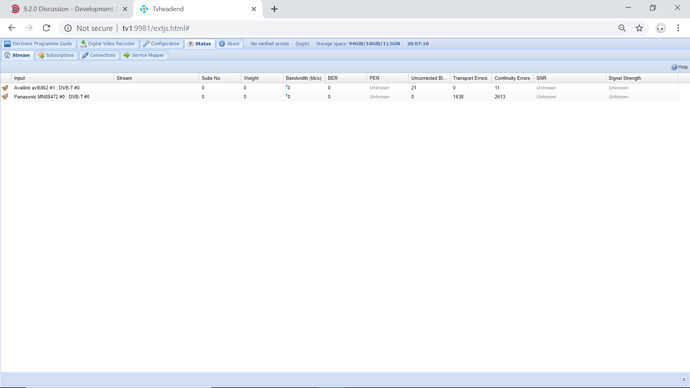 2019-09-18%20(1)1920×1080 62.3 KB
My gut feeling is that its going to be a driver or firmware issue, but I need a couple of days to try it out. I will break out another box so I can test it on a machine with a tuner in the same box as the backend.
To be honest unless there is something you are desperate for in 9.2.0. If you are running TVHeadend I would wait for the reasons for the problems to be Identified and Ironed out. I am not trying to say there is anything wrong with 9.2.0 but if you have problems with TVHeadend after the upgrade rolling back TVHeadend can be a pain if you reinstall. The WifeAcceptanceFactor can go down hill quickly if the box does not record her favourite soap of the picture freezes just at a critical moment.
PER, SNR and Signal Strength "Unknown" on TVHeadend
← previous page next page →