Go to Arthur’s VFD repository here
And use a95x-f2-aml-vfd.conf

try to boot it with apk boot to libreelec

Not required with the 2gb box.

Reset button is inside AV port .

reset button didnt work for me

on pc search in explorer network and thre should be path named coreelec if you found it go toconfigfiles rc_keymaps and copy there this file https://drive.google.com/open?id=1Qo3t1hNkM8PFaKrfe5MHf0Xs5znbzgQZ after it in configfile folder may be file named rc_maps.cfg.something rename it to rc_maps.cfg open it in last line insert this: meson-ir * a95x after you done you must have alowed ssh connect to it with for example putty and type this commands: systemctl stop kodi, systemctl stop eventlircd, ir-keytable -a /storage/.config/rc_maps.cfg -s rc0, systemctl start eventlircd,
systemctl start kodi and wuala remote start working

Or a remote.conf attached below.

Unzip it and rename it remote.conf

SMB and copy it to config folder

After reading through more posting, I understand your reply. Thanks.

This thing is a real pleasant surprise performer running CE
(Android works great for what i use it for eg: Youtube and some subscriber Apps)

The GOOD:
Price: Under USD$30.00
The 2GB version has both 2.4 & 5Ghz Wifi which is not advertised when purchased.
On the bottom of the box it only reads 2.4Ghz as well.
It’s smooth and fast user interface with really good speed SD Card Reader.
Running CE using a Samsung EVO Plus 32GB sd card is as fast as any comparable higher priced hardware I own.
Remote works great using Amlogic remote.conf.
Powers Box ON /OFF.
The Factory Remote also has Learned Feature to learn your TV ON/OFF Volume/Mute
CEC all works with my Sharp Aquos Quatron TV.
Only glitch is when TV is turned on i have to toggle between HDMI source
back to this box port to wake it up and it powers on.
If i power on the box it powers on my TV as set in CEC settings.
VFD all good with Arthurs addon and a95x-f2-aml-vfd.conf

The BAD :
Typical Chinese Low Quality Control in assembly of the Heat Sink.
I’ll probably fix this when i get the motivation.
See pictures supplied.
This box runs into high 60c to 70c Network Movie Library playback .
I set the Governor to On Demand and that got it down to Low constant 60c
The other annoyance is the LED light is always on if it’s booted
in CE OS even when box is powered OFF.
Bluetooth chip (MT7668) is currently not working with CE. 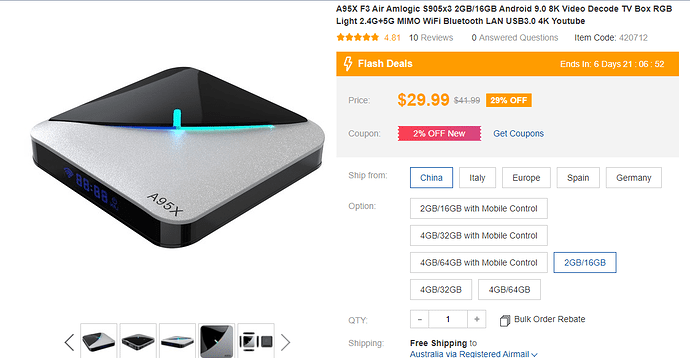 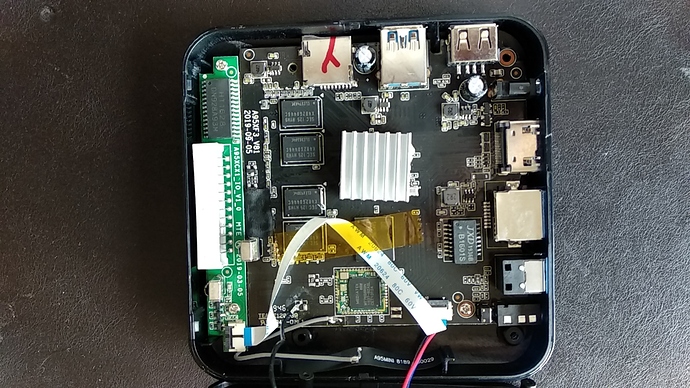 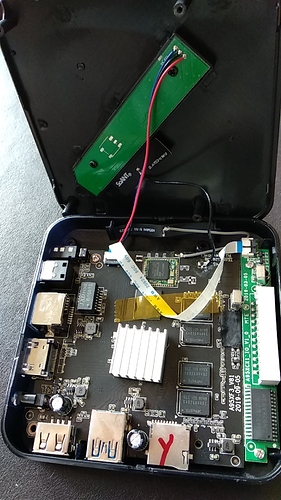 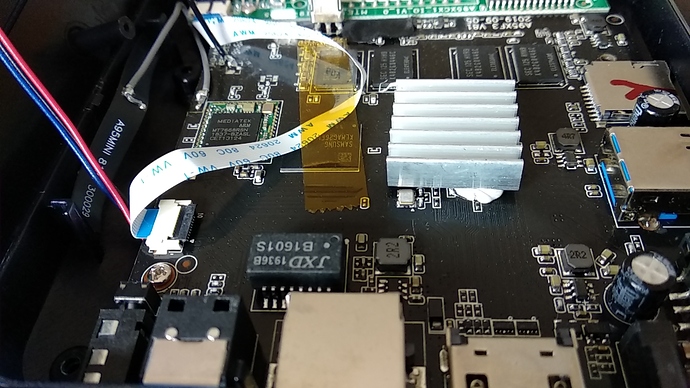 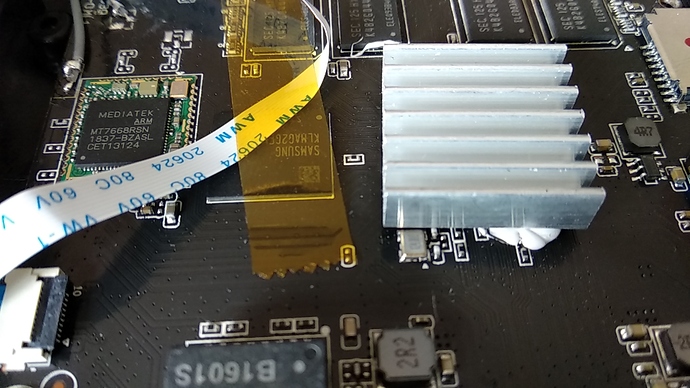 I’m using that box with 4 GB RAM 3 months and can’t say bad words. For around 30$ with CE it’s very good deal. The only one thing I did is disconnected RGB led light.

I added the Bluetooth CE issue in my post.

The IR On/Off remote code is hardcoded in the bootloader as it should be.
No ON/OFF issues with CE.

Thanks for the great info. kostaman

Hello friends, is there a way to record it in the internal memory ??? try with ceemmc -x, -v, and it does the process but does not start, it works only from SD, any solution? bluethot doesn’t work either.

I haven’t tried eMMC CE Install
Nor will i.
So have to wait for someone to reply who has LATEST Android Firmware.
They may have unlocked the Encrypted Bootloader on Latest Firmware.

Forget about the Bluetooth Fix in the foreseeable future.
Adam tried with hours spent on it.

Under $5.00 for a Bluetooth USB adapter.

@kostaman
Thanks for the detailed steps, I am able to get it running A95X F3 with latest nightly build, how CoreElec benefits over pre installed Kodi available in the Android OS.
Heat issue exist any better solution found.

The biggest problem with these boxes is the the casings are so small that heat is trapped within the box.
I took the top section of the case off and ran it with as normal for a couple of hours.
The temperatures dropped to the low 50c and high 40c.

I have stripped out the top case LED and 2 bits as shown in my pic below which helped reduce temps by 10%.

I only use Android Kodi to compare if issues in CoreELEC are found. 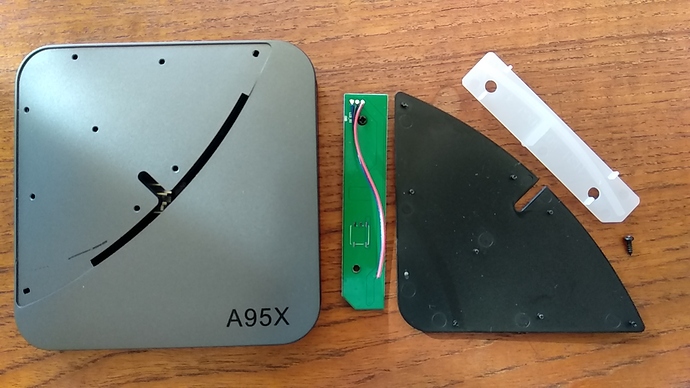 I always find it bizarre that design is often put before function with these boxes. Seems to me that with better ventilation and a cheap but functional heat sink many boxes would be much improved?

Are we seeing a convergence of SBC’s (single board computers) and TV boxes? Seems that Beelink have gone down the PC route but I’ve no idea what they’re like as I can’t afford one!!! Well for £200 you can buy a good dedicated PC secondhand. Small but powerful would be bliss though!

CEC all works with my Sharp Aquos Quatron TV.
Only glitch is when TV is turned on i have to toggle between HDMI source
back to this box port to wake it up and it powers on.
If i power on the box it powers on my TV as set in CEC settings.

What is it you are trying to achieve using bl301 injection ?

Not sure if my Box with the CURRENT Firmware Dated 9th March 2020
has an Encrypted Bootloader ?
Standard ToothPick SD Card CE Installation worked straight away.

The IR On/Off remote code is hardcoded in the bootloader as it should be.
No ON/OFF issues with CE.

I don’t have that issue.
I have the 2gb / 16gb model.
Check your Firmware too.

Let me know if anyone wants it.
.