I recently bought an Odroid N2+, installed Coreelec on a eMMC for use as a HTPC. It works great. But I am looking to find a good remote controller to easily use my odroid. I wanted to have a keyboard, but also be able to turn the odroid on via IR as I found that it can’t be turned on by USB dongle. So I choosed a Rii i25
https://www.amazon.fr/（Nouvelle-génération）Rii-Mini-sans-AZERTY/dp/B014MCNHVK/ref=sr_1_3?__mk_fr_FR=ÅMÅŽÕÑ&dchild=1&keywords=rii+i25&qid=1601737054&sr=8-3 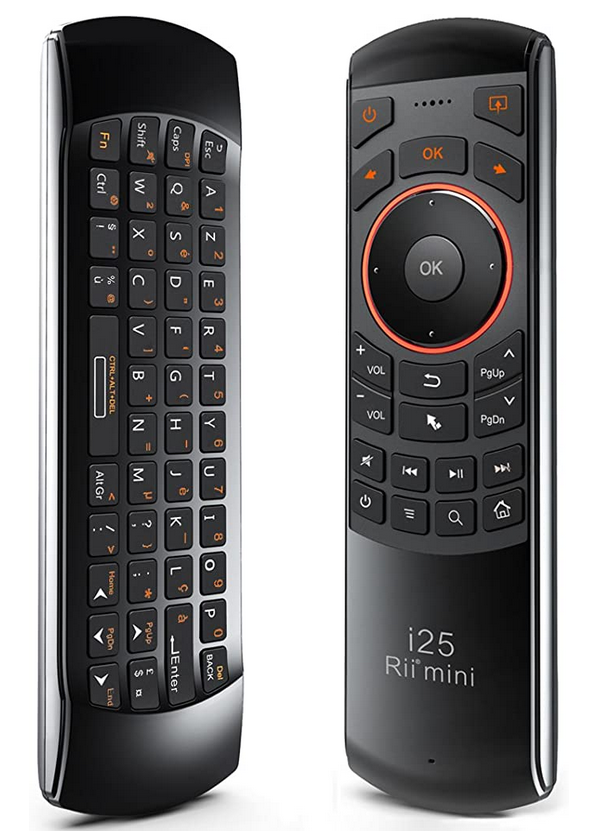 The white keys uses RF communication with the USB dongle, as well as the keyboard. The red keys uses IR and that’s what I would like to use to turn the odroid N2+ on. It works with IR learning, I am supposed to use it to replace another remote. But I currently have no other IR remote for my N2+.

I would like to know how I can configure my odroid to be turned on with the ON IR button on the remote. I searched a lot about this and didn’t find any easy guide for this. I also asked the odroid forums but I’m also asking here to maximise my chances of finding an answer.

Thanks in advance for your answer, have a great day

Thanks, but I already know that. I had a paper with the remote saying how to use the IR learning feature. And my problem have nothing to see with IR learning.

My problem is that I don’t know how I can configure my odroid to be turned on with the on button of the remote.

The purpose of remote learning is that you transfer to remote power on/off code from the original remote (or one that is able to power on and off the box) to the new, programable remote. No “old” remote, no way of programming the new one.

If you find a way to program that button without another remote, please do share.

Yes, that’s what I understood.

But the fact is that my remote, even if it has IR learning and that I didn’t learn anything to it, appears to already send IR codes when I push the buttons. I would like to use these to power on my N2+.

So my question is : How can I configure my odroid N2+ to be powered on by one of those codes ?

The Rii remote might be sending a standard signal, accepted by say 75 or 80% of the mainstream boxes, but it’s not the correct signal to power on your odroid. Correct?

Therefore your problem is how to program the correct signal (aka hexadecimal code) into the remote.

To achieved that, you require a transmitter (read other remote with working code).

You could try to inject the bl301 blob, however, based on my experience with the MX3 Air Mouse, I doubt it will make a difference. It’s a one in a billion shot that it might work.

Here is the discussion on the MX3 Air Remote:

I have an odroid n2 and latest stable coreelec installed. But I am having bad luck with getting a reliable remote to work. I have a non branded android remote with keyboard. Which for some reasons works sometimes great then doesnt work even with full charge I also have official osmc remote which is giving me same hassle. Sometimes very responsive and sometimes not at all. Odroid n2 is in same place and I am using a usb 2.0 extension cable, I have tried a few different cables same issue. I…

I would like to try using the BL301 inject, but according to the tutorial the option to inject should be in my Coreelec settings in Kodi. But there is no option about this in my hardware settings. I only have Heartbeat led, IR remote power code, wake on lan and usb power. That’s all.

Yeah, I could also try to program the remote to use one of the codes the odroid can read out of the box.

Is there no way to teach the odroid to use the code the rii sends out of the box ?

That would be the bl301 blob injection. Like I said, there is a small chance that it might accept the factory programmed power on/off codes. If the bl301 injection is unsuccessful, you will have to find literally any remote that can power on your odroid, and transfer the code to the Rii.

The only other option I can think of is to use a Flirc universal programable usb dongle.

The option for bl301 injection does not appear in my hardware settings. How can I activate it ?

Odroid N2/C4 do include the bl301 blob already. So you only need to configure your ir wakeup power code in config.ini.

I heard about flirc, but I didn’t really looked into it in details yet. I will look more about it.

Apparently, flirc works as an IR receiver dongle. But can it also receive inputs from RF communication ? Can it replace the Rii USB dongle ?

My ultimate goal would be to have 1 remote only for my whole system, with the Odroid N2+, a Pioneer VSX-527 receiver and a BenQ W1090 projector. But I don’t know if this is possible and I’m getting lost with the option available. The projector and receiver are both CEC compatible but it’s really random and I can’t rely on it. Can the FLIRC dongle also send IR inputs to other devices ?

My ultimate goal would be to have 1 remote only for my whole system, with the Odroid N2+, a Pioneer VSX-527 receiver and a BenQ W1090 projector.