I was reading that a couple of days ago. But, from what I understood, it will only be available in China.

Besides, my Kodi data is more than 6 gigs,

Agreed and I appreciate all the work the CE team has done so far. I am very excited about these new family of devices for CE and moving to new kernels, even if it means my N2 workhorse will die on the newer kernel.

Right now there’s no clear path for the N2/N2+ and the others. Don’t kill it too quicky.

The new Beelink GT-King II will be an awesome machine for dual booting.
The CoreELEC team has worked miracles getting the new Amlogic SoC’s to work with CoreELEC.
Great job!!!

No problem. Will wait and see what comes of this little unit. Appreciate yours and other’s efforts so far. Hopefully spdif gets support down the line.
A friend of mine who lives an age away from me has this HK1, he turned me onto this device. A few hours ago I convinced him to try spdif to a receiver.
I can confirm spdif works at least from the android OS on his box.
He’s not interested in CE Kodi so that’s as far as his help will go unfortunately.

So I have here new dtbs to test.
All for 2g/4g and 100mbit/1gbit. I also changed the gpio of the spdif output so it might working now as well. Please test and report which device does work with what dtb and what functions are working or not working now. spdif, eth LAN, WLAN, USB, uSD,…

Convinced my friend to test coreelec spdif. He noted that it indeed works with sc2_s905x4_4g_1gbit.dtb. He did a quick test of some hi res audio I shared for him and found that it passed 96khz but it was stuck at 16bit instead of 24 on his receiver. Wav files and flac files, so passthrough and lpcm decode stuck at 16bit.
He can’t test video surround sound as his receiver is 2.0.

As for LAN, his works on android but said the menu switch to turn it on in CE doesn’t go into the on position. Looks like another with LAN issue.
He has the gigabit model.

I tried the two 4g dtbs and neither worked. There is a slight difference since the light on the switch stays on with the 100Mb version even when Kodi has no networking. Also I couldn’t add my hub eth1 while the eth0 cable was connected.

Hello, please could you recommend me some good CE supported box with S905X4 (eg. from Aliexpress) with 1GBit network. I want to build a small ultra low power NAS for one USB HDD with 4K Kodi and HDMI CEC support and I think this platform might be perfect for me. Thanks for the advice. 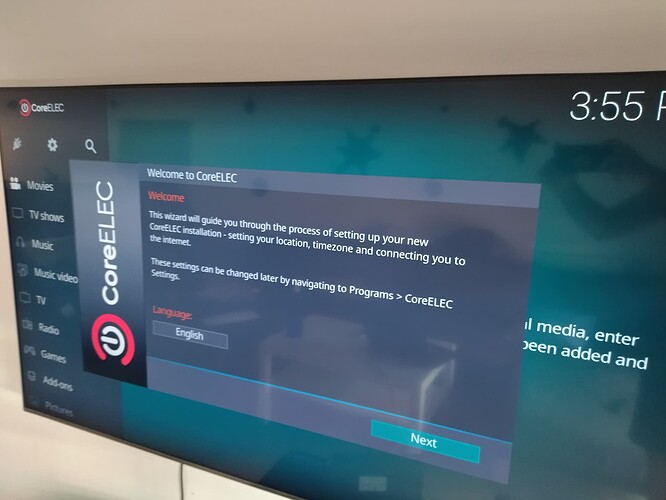 Did not test the Spdif output.

This DTB and the prior one that I used, powers the device back on after a power off…

I tried with people sleeping and didnt check sound😅
Works fine, problem was a wizard

Anybody know if booting from emmc is supported on the Vim4?

Hi. So do we have a stable version for HK1 Box?

If you mean stable as “official stable” there’s no ETA. And it won’t ever be stable if there’s only a few testing with nightlies.

Stable is relative but overall CE works as expected. Given that I have a NK1 that doesn’t have the supported wired networking chip and I couldn’t get sdpif or analog working (both work on Android) then there is work to be done, but I didn’t find any major show stopper with my use case which is PVR except perhaps black screens changing video that I am not used to. I can run my server (NextPVR) and clients fine and the extra RAM and ROM are nice but it is not faster than an N2.

Considerations for me for a decision in the future if this is the future of CE.

For experimenters no Armbian Amlogic or LE 20 builds yet.

For me there is no redeeming value to the Android on this box. Some might like Kodi for Android with more memory but that has nothing to do with CE.

@clarkss12 when you posted about “Dolby Vision” support earlier did you only try on a HDR monitor? I decided to test some DV files from https://www.demolandia.net/4k-video-test/dolby-vision.html and they all play with the awful colour that I expect when the player doesn’t output properly from CE or Android.