Right, there is no onboard storage, and the eMMC needs to be purchased separately. But it’s pretty quick, I measured my 16GB module at ~140MB/s read and ~40MB/s write speeds.
But a fast SD card will work very well too, my 16GB Sandisk Class A10 cards are considerably faster in the N2 than in my S905X devices.

Yes, according to HK, in the N2 they are using properly implemented UHS dynamic voltage scaling, so SD cards are faster.

are you sure, this table says otherwise: https://www.cnx-software.com/wp-content/uploads/2019/03/Amlogic-S922D.jpg

Oops. Well I guess once people with Samsung TVs start getting their N2s we’ll find out whether it works or not. My LG doesn’t support it.

I am interested in buying an N2 but not sure exactly what components I need to run CE (when released). I have guessed I need the following: 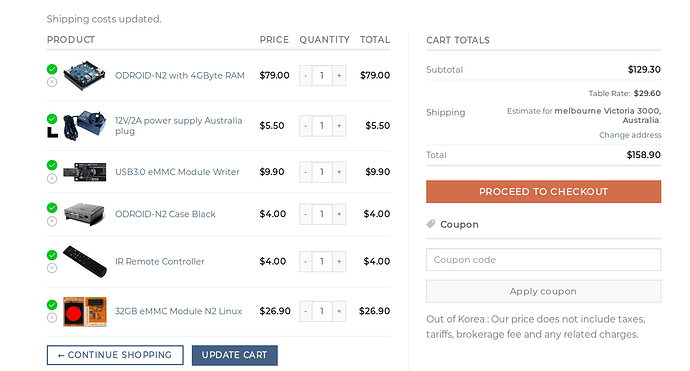 DVB is still an early WIP, and @afl1 is on it. I can’t say when that is going to be ready.

At a minimum you need just the N2 itself and the PSU, everything else is optional.

I would go with the 2GB model if you only plan to use it for Kodi.

I also would not bother with the eMMC writer adapter and as Arthur said the 16GB eMMC module is more than enough, but if you have a fast A1/A2 microSD then I wouldn’t bother getting one.

DVB is still an early WIP

Are you saying the N2 presently will not run TvH with a PS3 PlayTV DVB-T tuner or HDHomerun Tuner?

I’ve just registered here so can’t send you a PM.

If you’re anywhere near Sunbury (NW Melb) I have an eMMC writer you could use if you only needed it occasionally.

We could also split the shipping if you were interested.

While it is possible to boot the N2 with an micro-sd card and write to an attached eMMC module, the eMMC writer is handy because you can write the eMMC directly from your computer.

If the $9.90 USB3 eMMC writer is to high a price for something you feel you might not use that much there is also the $1.50 eMMC to micro-sd adapter as well https://www.hardkernel.com/shop/emmc-module-reader-board-for-os-upgrade/

It’s not as a nice as the USB 3.0 eMMC writer but does allow you to use most USB to micro-sd adapters to write to to the eMMC if needed.

If you want to go with an eMMC module. CoreELEC will work no problem with the 8gb eMMC but I would recommend the 16gb or 32gb eMMC modules since they are only minimally more expensive then the 8gb modules and have much better performance then the smaller 8gb module. Also if you are using the eMMC module for CoreELEC, it doesn’t really matter if you get one with android or linux preloaded on it since you will just be writing over it with CoreELEC.

If you need to use bluetooth or WiFI and don’t have an adapter. The adapters offered by hardkernel are fairly reasonably priced, and based on well supported good quality chipsets. I’ve got several of a them and have found them to be pretty reliable.

For a very basic remote that works out of the box it’s not to bad. However if CEC or a harmony/mce remote is an option for you, you can skip this remote.

That’s actually what I’ve got and it works a treat.

So small and infrequently used that I’m amazed I haven’t lost it yet.

I see there is quite some effort towards a working mainline kernel.

As it’s probably still WIP, I wonder what is not working that would be needed for CE?

Does anyone know if this will support PXE booting? I do this today with my x86 boxes and my RPI3 units and store the OS content via NFS on my FreeNAS box. Since all of my media content is stored on my NAS I don’t need much OS install space so PXE makes it easier.

Its 4k but Estuary theme is only 1080p until its updated upstream.

Thanks, glad to hear it’s a true 4k GUI so even with a 1080p skin you’ll get much sharper cover art.