Now that CoreELEC has full support for the X4 SoC, I finally decided to purchase the Ugoos X4 Pro. Ugoos is known for their excellent hardware AND superb firmware.

It has been out for about a year, but with that form factor, it did not fit into my “setup”. It suffers from an identify crises. It wants to be an Android TV BOX, but it was borne into a DONGLE form factor.

It will be my main media player, using CE, and with a good firmware for dual booting. I just have to figure out how to integrate it into my setup, which will sit on my TV stand with all of my other devices that are connected via Ethernet.

When it arrives, I will do a thorough review…
CoreELEC makes this all possible.

This is my setup… Changes frequently. 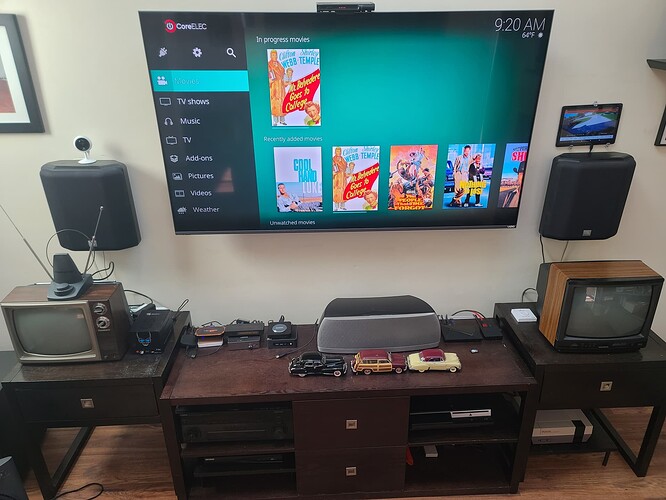 Haha…pretty cool I must say

I’m using CE with this device since it stared to be supported. It always work perfectly, without any bug.
The only thing that don’t work for me is playing files at 4k60Hz, but I don’t know if it’s due to my HDMI cable.
Other than that, I’m very happy with it!

How do you set it up, as a dongle or box? Are you using Ethernet?? Do you use all of the Android capabilities, ex. automatic framerate and resolution switching, and the HD audio codecs. I guess, this box shines with those abilities. So, it will be great for dual booting.

Still waiting for mine to arrive.

Do you mean missing 4k at 60fps under CoreELEC or Android???

Hello!
Im using It as a box, connected through ethernet and working at Full speed.
All Android features Works as intended, including AFR. HD audios Works flawlessly (thats why I bought this box - always using TrueHD and DTS:X MA)
After CE release I only used It. Never boot to Android again.

Im missing 4k60 in CE. It Works in Android with Vlc ir ViMu

Now that you have brought it to their attention, I am sure they will have it fixed soon.

4k50/60hz is fixed a long time ago already. Use latest status of CE.

Yeah, thats why I think that it could be related to my HDMI cable.
It’s already on the latest stable release but can’t play smooth.
But I’ll try another cable anytime soon

How is CE running on Ugoos X4 pro? Any issues?

I am thinking of buying an Ugoos X4 Pro 4gb/32GB but before I do can anyone confirm that with the bespoke Ugoos X4 DTB does everything work properly with CE 19.5rc2 ?? Particularly does the Gigabit Ethernet, WiFi and Bluetooth devices all work okay in CE ?? Is this box really a much better box than the cheap ones at half this price ??

I also need Android 11 too for my Digital Concert Hall app Version 3.x as that gives me the ATMOS Immersive Audio option not available with Android 9 boxes which only install version 2.x without ATMOS.

One thing I notice is that there seems to be no indicator light to show when the box is on and working ?? Unless there is such an indicator led that is just not easy to see in the pictures of this box.

Finally I did purchase a Tanix X4 box recently but wish I had not. No WIFi or BT in CoreELEC and no needed drivers available apparently and it only has a 100MB LAN port. I get bad buffering on my IPTV streaming In CoreELEC with the latest PVR Simple Client installed and with this standard LAN port it reports that the connection is too slow. It should not buffer even with FHD IPTV streaming with the standard 100Mbps LAN port surely and it only buffers with the IPTV streaming and no other high resolution video streaming. Cannot test it with WIFi as not drivers available of course. It also buffers with IPTV on Android but not as badly as in CE. I do not get any IPTV problem with my older Tanix TX5 Deluxe S905X3 box with its gigabit LAN port. I always connect my boxes to my Gigabit router and fast 1000 Mbps fibre connection.

Did you see the review on here about my Ugoos X4? I can do some specific test if need be.

[quote=“RayW, post:13, topic:18976”]
I also need Android 11 too for my Digital Concert Hall app Version 3.x as that gives me the ATMOS Immersive Audio option not available with Android 9 boxes which only install version 2.x without ATMOS.
[/quote] Not sure what this means, or how to test.

Also, I was lucky and got the HKR box X4 that works perfectly for me. My preference is the HKR box, but t that is just my opinion.

Ordered this box Aug. 4 and it arrived today. Thought I was purchasing the X4 Pro, but must have clicked wrong item, got the Cube instead. OK, now problems begin. Ugoos is one of the first manufacturers of these Chinese Android Boxes/sticks and highly rated for their hardware and firmware. My first impression of the Android OS is not very favorable, but that is a different topic. installing CoreELEC using a microSD card, was straight forward. I used this device tree >> sc2_s905x4_ugoos_x4…

Hey clarkss12
This box is only 100 mbit ethernet lan?
From reviews
There is no gbit?

Another option is the BuzzTV X5 with gigabit

There are actually (at least) 3 versions, the 100 Mb and 1000Mb like the Ugoos plus one with the 1000Mb JL2101 chip instead of RealTek which is the one that doesn’t work with CE but it can run at 100Mb using pieces of a PR that was closed.

Was referring to the Ugoos x4 pro
Gig ethernet?
Then remember/reread post about clicking wrong button and getting the Cube instead when you ordered…

I think the Ugoos x4 Pro does come with
1000 mbit ethernet version.
However which chipset?
Jl2101.?

Thank you
For info