A new week, a new box
After my fight with the X96 MAX + what works now very well, thanks to all the helpful folks here and during this process learning a lot of important things like at the install switch SSH from off to on, later it will not work even if it shows it is on and you can not SSH…

This time I tried a minimal box A95X F3 RGB Amlogic S905X3 (the purple one with the light show) in a 2/16 flavor since CE uses mostly less than 1 GB to run Kodi.
Reasons for buying, low temperature in several tests and 2/16 should be with 2.4 and 5G and that for 25 Euro. 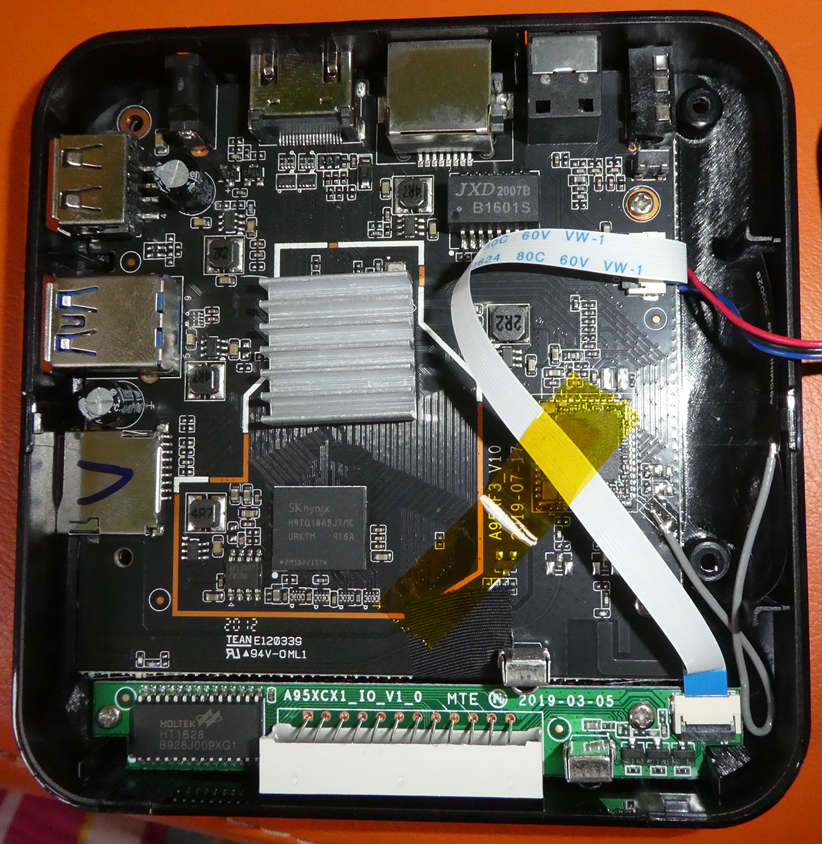 Now me as a newly “pro” haha who had the the card with the right image and the driver for the remote waiting to be booted.
TWO days I was fighting tried all what was shown in the how to install when your box don´t want to, read through lots of info here and elswhere.
NADA, Box shows boot and screen is black.
Has anybody successful installed CE on this particular box? The one success story I read had a firmware from 202003 mine is 202006.
I read about the sneaky boatloader who prevents the easy way but I was even in the Android firmware bootscreen , I even tried the:
Reboot to LibreELEC_v1.1_apkpure.com.apk what was confirmed works with CE.

So if anybody has any helpful hints, I am all ear.

Reasons for buying, low temperature in several tests and 2/16 should be with 2.4 and 5G and that for 25 Euro.

And if you purchased the one with eMCP

I doubt it will ever boot CE.

that is the problem if you go for fancy colors and 64color design instead of 16 color led (AIR model).
The RGB was the original model of that series , now they have the air and the slim as newer models also.
The board design from the RGB looks like it is from 2016.

Problems with the box, there is not 5g only 2.4
Even the box is from the factory reduced from 1900 to 1700 as a max frequency to keep it cooler it reaches 75C /167F durinfg a longer Kodi database restore from self powered HDD.
If the lid is removed the temp stays at 68C /154F

This box has 2 IR recivers, why? because somebody wanted to add a display module and that covers not only the IR module but blocks totally the big air vents in the bottom.

If you remove the led light module and remove the white plastic cover difuser, than you have a nearly invisible top vent what should bring some cooling to the ultra thin aluminum cooler. (make a couple holes in the bottom front side to let air in)

The remote is also not as good as the X96 max + what hs at least pause/play and fast foreward and rewind buttons and you can remap the sun button to the stop function in Kodi.
Let me show you just for giggles the heat sink of a low powered N3450 Celeron in a Beelink box
Now that IS A HEATSINK 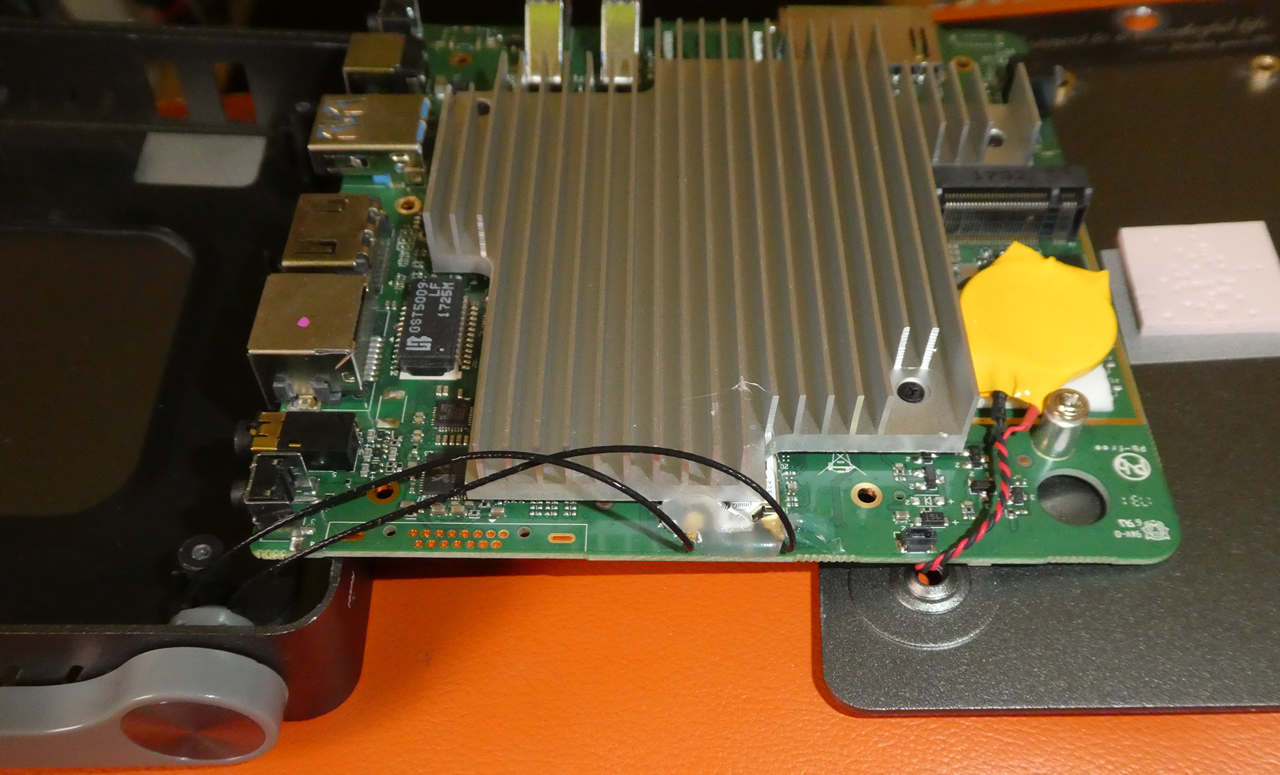 You got to love Murphey´s law.
After I got another x95max+ this time the 2/16 version (for below 22 Euro fast shipped).
I got problems to run it with the CE thumbrive I had from the same box but the 4/64 version. It worked when I remembered that I had to replace the 4GB img with the 2GB img.
Yesterday just when I put the pizza in the oven it hit me out of the blue, what if I use the CE thumbdrive with the 2GB from the x95max+ on the same SOC A96x F3 RGB?
So I bypass the install process what did not work with the A96x F3.
I tried, nothing happened. Oh - the reset pin, OK - push pin , plug in, release pin after the A96X logo shows for a while and CE was there, includig all my KODI settings and database. Just the remote did not work, but it still had the remote conf from the x95.

To make things short, my pizza was ready and I will do some more testing later.

Well you can swap the remotes if you like just use the right config,
The 4GB Img does not boot with a 2GB model, but the 2GB Img boots and runs with the 4GB model. Go figure.

And as to the display (whitout any other modification or drivers) of the X95 max+ stays dark while the A96x F3 RGB shows “boot” permanant and the rgb lights are on but fixed in one slow mode. So you know the box is on before you see something on the screen (projectors are like the old tube tv´s they take their time to warm up and show a picture)

After I figured out how some changes can be made on the windows visible part of the SD card (remote and what box config) and some on the linux part via KODI File manager like the display VFD.CONF what needs to go into the /storage/config folder via an external drive, things are improving. I have now 3 different configs on the SD card and depending on the box the needed file gets renamed or copied.
On the A95X RGB and the X96max + the display shows now permanet the temperaturte and the power icon blinks if there is data activity.
The A95X uses the better remote from the X96 ( it has pause and ff and fr also the button between the both volume controls is mapped as a stop button while the second volume control is mapped to the amplifier.

My X96 max+ 4/64 did go into the great beyond after working without any problems and just after I activated the bl301 injection of the wake up on remote control in the Coreelec settings. Now with or without the Coreelec SD card the box shows no sign of life - no matter what I try.
Meh, I had 4 boxes and need only 2 so I figured that during the learning process I will loose one anyhow.
But on the nice side I found out a workaround for the A95X RGB what was loosing the wifi when the USB 3 port is used.
Just use an external USB 3 hub with a long enough cable so it is far enough away from the box and everything works. 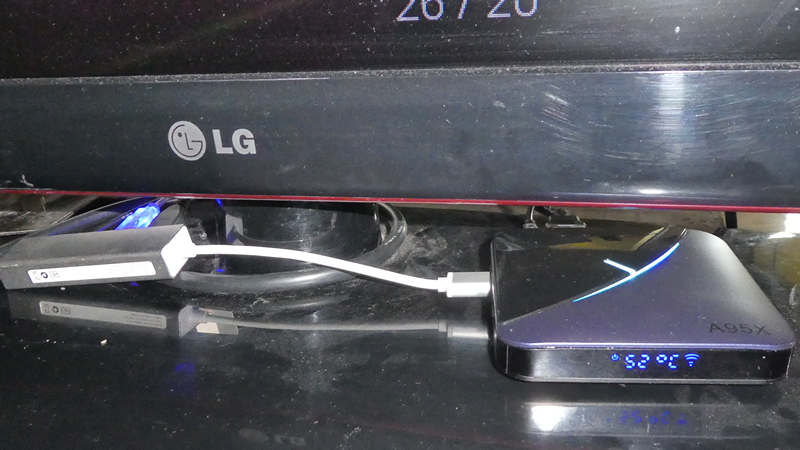