Just curious with regards to 3g ram S912 boxes. Is this much ram needed for anything that the box will have to process, or is 2g sufficient?

Sales pitch. I guess 4K and HDR are hungrier when processing, but 3g?

It’s not needed but I would not recommend anybody buy an S912 box, support for them will probably be dropped after Kodi 18.

When will Kodi 19 stable be out?

I wouldn’t buy a new device atm
Take a cheap one from small ad known to be supportet and wait for the “next big thing“ tv box.
Maybe with aml 922 or rockchip if there is a complete mainline kernel. We will see…
Just my 2C

Sadly to say (I have a pricey minix u9) but amlogic seems to drop support for 912, the last SDK for it was Android 7.1, no oreo, no gpu drivers, still the old 3.14 kernel. Kodi plans are to drop support for specific platform hw codecs and sit on top of mainline kernel api in future releases. In this moment the best amlogic chipset for CoreELEC is 905X

The best amlogic is s905D, which is like an s905X but supports gigabit.

It’s not needed but I would not recommend anybody buy an S912 box, support for them will probably be dropped after Kodi 18.

Which device do you recommend? I’m in the process of returning my Beelink Ultimate due to fake ram.

Don’t purchase an S905W Chip Box. Crap picture compared to S905D Chip. I haven’t used CE With an S905X Chip yet. I have compared the S905W with S905D using CE. and the S905W is definitely crap.
Best picture quality hands down is my Rock64 Rockchip RK3328. but plagued with Alpha Kodi bugs at present. Mainline Kernel is a plus. Community builds MIGHT happen with CE.
Tanix TX5 Pro still available is a good box. Tanix TX7 out of production but maybe available is a great box. The rest are a mixed bag of hardware and firmware.

Really appreciate the information and recommendations here. Might be nice to have a category under general where box developments could be communicated.
I was looking at the S912 for HDR, but I can wait.
I got stuck with 2x Abox A1 Max S905W because of a bad comment made someone on Amazon saying it was an S905X. The first I paid for, the second Goobang Doo sent me free because Bluetooth didn’t work in the first and I bitched about the misinformation about the chip type. Luckily I have friends willing to buy the Abox’s. Many of the adds on Amazon do not list the processor type - just listed generically.

Which device do you recommend? I’m in the process of returning my Beelink Ultimate due to fake ram.

I own 3 Mecool M8S PRO+ S905X 2G/16G DDR3 boxes which you get for approx. 40$, and I’m quite satisfied! Everything works “out-of-the-box” and I find it very reliable and stable. Network throughput of 93 Mbit makes it great for 4K HDR Remux playback, CEC works perfectly with Samsung/Philip TVs and Onkyo receivers, and dual boot with Android (CoreELEC boots from SD/USB and uses internal for storage).

If you want to play files which have a higher bitrate than 90 Mbit, simply buy a 10$ Gbit ethernet usb adapter and there you have 300-400 Mbit throughput. I can confirm that the 300 Mbit Jelly Fish clip plays flawlessly with PKC (the same should apply for NFS).

P.S: As soon the CoreELEC devs fix the 4K/HDR banding issue, S905X boxes are as great as S912 regarding 4K HDR10 playback (given bitrate < 90Mbit, unless you use a Gbit adapter)

For me it would have to be the Vorke v1 plus. It costs a bit more but Intel is what LE and Kodi is targeting and that is the only option which offers future proof support for any of the likely formats that will be around for the next 5years or so.
Any of the Amlogic boxes are a crap shoot of poor implementation and even worse software support and it looks unlikely that the company policy will ever change. CE saved my ass on a poor choice with the VIM2, but as adamg said this will be left high and dry by the onward march of Kodi.

However, as OSMC offers 5 years of software updates for the Vero 4K which is a S905X box, it’s likely that S905X boxes might get good support in the future by communities like LE/CE etc! And considered how cheap the boxes are, you can’t expect the boxes to have full support for 3++ years…

Taken Amlogic roadmap for 2018 in consideration, S905X2 and S922 might be released in 2018, and they will most likely release way before Kodi 19, which might keep Amlogic boxes supported after Kodi 19 if their’s proper Linux libraries get released… If not, there will arise new cheap devices that will take the throne from Amlogic as the best SoC for KODI with a low-cost setup.

Follow this thread if you want to keep up with recommended devices for Kodi: START HERE - Pick the Right Kodi Box

It looks like AML will cease developing Android beyond 7 (though this cannot be entirely true since there are already versions of Oreo on the VIM - though buggy) and start their own custom TV box branch.
This is sure to make mainline Linux support very unlikely. Coupled to this is the fact that they are moving to yet another GPU architecture so any chance of Mali drivers coming out from them for their old SOC’s is pi in the sky.
It seems they have simply lost interest in the box market as currently configured. 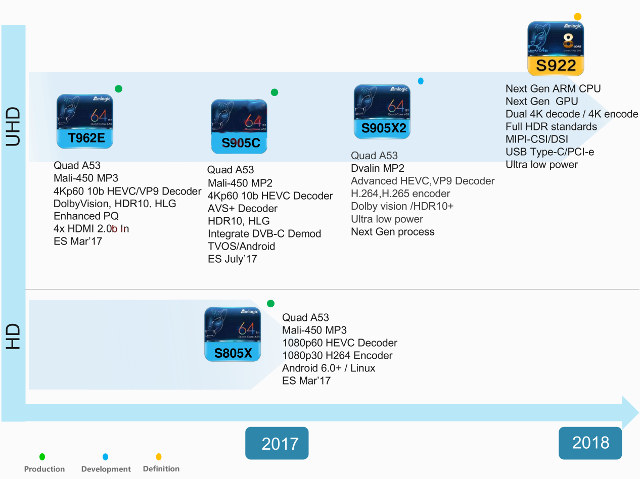 I've been asked what's next for Amlogic a few times recently, and today I received an Amlogic 2017/2018 roadmap dated Q3 2017 that shows three new

After Kodi 18 only devices that conform to mainline/v4l2 standards will be able to run Kodi, everything else will no longer work, this decision was made by Team Kodi and it was actually supposed to happen with Leia but they decided to delay it.

Unfortunately the problem with S912 is that the proprietary GPU blobs needed have not been licensed from ARM and it is unlikely they will be as we have already been waiting over 2 years already.

There will be no hacking to make it work because it simply won’t be possible once Team Kodi start the process of removing the current code we use.

Only time will tell as it’s all conjecture at the present.

None of the cheap boxes, I think there are a few of the more obscure more expensive developer boards which conform - those running Samsung SOC’s. The Pi’s are sort of in conformity (but not really). Anything running Mali gpu cores will likely fall off a cliff as ARM are stubborn in not allowing any SOC builder to release code for the Mali GPU platform and this is very unlikely to change.

All this is at least two years away so I wouldn’t lose to much sleep over it.

There are good technical reasons why KODI is doing what they are doing, but I also suspect they are deliberately trying to pull the rug from under the Chinese cheap box sellers because of the heat they have brought down on the KODI project. This why for me Intel is the only sure bet for futureproofing against the changes coming down the track. Intel gets the love because it is a well supported monolithic platform with billions of users, against the SOC’s user base of millions spread over a highly fractured ecosystem with almost no post purchase support.